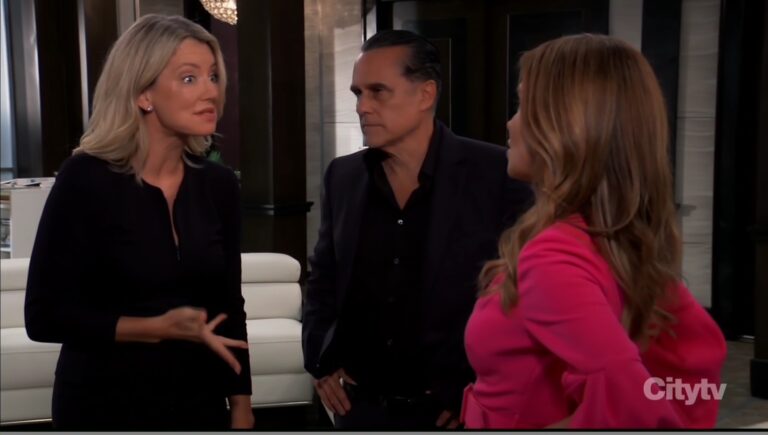 What’s coming up on General Hospital this week? Michael and Willow are derailed, Esme notices something is off, and Trina goes to trial. More!! Two weeks of GH spoilers July 18-22 here.

Check out this week’s GH spoiler video as Trina and Rory get close on a picnic, Valentin demands some answers from Victor, and Carly vows that Esme will regret the day she missed with her kids as the trial kicks off.

It is July 4th in Port Charles, and the fireworks are about to begin.

Valentin goes to Nina, but is surprised by her reaction.

Valentin has a suggestion on how to change her villainess status.

Olivia attempts to help a friend in Carly but Carly refuses to let her buy Metro Court once again.

With Sam, Dante and Cody reminisce at the pool until he spots a new arrival of interest.

Spinelli’s not happy that he’s been blackmailed by Cody into getting him a date with Britt. Cody says he won’t reveal that Spin is behind the dating app.

Britt’s the third wheel to Austin and Maxie’s romantic picnic in the park when Spinelli arrives.

Michael and Willow get derailed.

Sasha refused to go to rehab.

Trina finds herself distracted as her trial is set to begin.

Sasha’s more concerned about the fallout, but Brando tries to convince her she needs help.

As Portia worries about Trina’s mental state, Curtis and Marshall continue to seek evidence to exonerate her.

With an unexpected change in defense the morning of Trina’s trial, Laura, Portia and Joss support her as she’s forced to make a big decision.

Nikolas tries to reconnect with Ava.

Curtis and Marshall try to track down a lead.

Esme tells Nik she’s worried about her and Spence. She hugs him.

Rory tells Spence to stay out of his relationship with Trina.

Angry at Valentin, Victor takes matters into his own hands.

Laura is almost shot but Valentin saves her.

Laura is concerned about leaving her family in order to tend to her mother.

Laura will leave for several weeks as the actress, Genie Francis, is on holiday.

Joss urges Trina to come forward with her alibi.

As they wait, Curtis and Marshall discuss more about his past.

Esme is caught off guard.

The guy Esme bought the burner phone from comes to her place.

Esme taunts Ava about her thing with Nikolas though Ava doesn’t have a clue.

Nina and Olivia argue about her owning the other half of Metro Court.

Carly says bye to Metro Court. Drew helps her get her things together and she gets flowers from Olivia, while Nina watches.