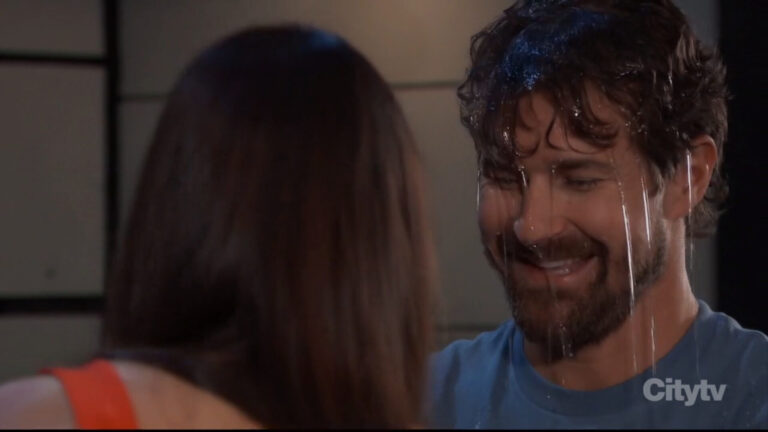 What’s coming up on General Hospital this week? Trina’s friends become increasingly desperate to save her, Sonny and Nina have an uncomfortable conversation, and TJ tells Willow that some serious questions remain.

In this week’s spoiler video, Britt is expecting disaster, a brawl breaks out at the gym, Trina has her day in court, and Spencer tries to get what he needs from Esme.

Spencer enacts his plan to help Trina as her family and friends gather to support her at trial.

As he spars with Dante at the gym, Sonny admits he got into it with Nina about Carly.

In the steam room with TJ, Brando isn’t able to relax away his worry about Sasha.

Trina’s trial begins. Joss gets out of hand.

Nina has an unanticipated encounter at the cemetery.

Nina talks to Liesl about Sonny.

Dex and Brando and then Dex and Michael get into it with Sonny getting between them.

Brando vents to TJ about Sasha’s addiction and how he didn’t see it.

Trina worries about her case as Joss and others are called to the stand to testify.

The gloves come off between Spencer and Esme.

Esme goes off on Spence.

TJ tells Willow there are more questions that need to be answered.

Britt admits to Brad that she’s going on a date with Cody. She’s embarrassed.

After working out with Michael, Dante notes Cody hasn’t heeded his warning. He’s going on a date with Britt.

Jordan takes the stand, as does Rory.

Epiphany sings as does Chase.

Maxie accuses Spinelli of stalking her as Austin receives a disconcerting text.

Nina and Brando continue to worry about Sasha.

Sasha’s released from the 72 hour hold.

Cody tries to get inside info about Britt. Spin won’t give.

GH did not air today due to ongoing news coverage.

Britt calls out Cody about his true intentions.

Esme pleads with the bartender in an attempt to save herself.

Britt’s date goes terribly and she douses Cody in wine as he calls her a nag.

Esme winds up drugging the bartender as Curtis comes knocking on his door.

Spinelli makes a confession to Maxie. He’s the person behind Society Set Ups.

As Marshall comforts Portia about Trina’s case, Curtis makes a deal to help.

Austin meets with a mysterious man.

Austin’s forced back to Pautauk.