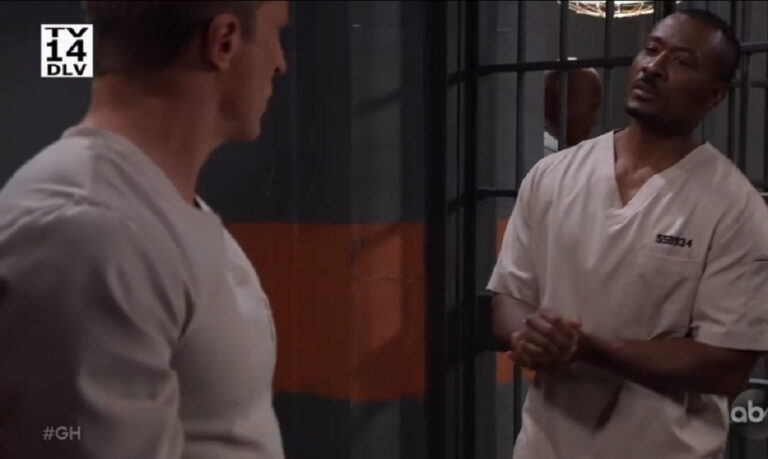 Soaps Spoilers is back with all-new General Hospital spoilers! The week of April 26 – 30.

It was a short week for GH. In Nixon Falls, “Mike” tried to convince Nina that Elijah was no good. He was once arrested for embezzlement. Jordan wants Carly to stay out of her way and let her do her job, but Carly argued that she needed assurance that Cyrus was being taken care of. Meanwhile, Shawn and Jason were reunited as cellmates in Pentonville. And Michael and Willow agreed that Chase is their priority. Meanwhile, Peter gloated to Anna about all the pain Chase is in and reminded her of his demands. He smashed the vial with the antidote to show how he’s in charge. Last but not least, Alexis came into a spot of bother when Hilda threatened to break her teeth because she talks too much. Ouch. Luckily, Steph came to her rescue and it was revealed that she was ordered to by Cyrus.

General Hospital spoilers for the week of April 26 – 30.

Laura asks after Liz’s well-being.
Valentine overhears a private conversation giving him an advantage.
Carly wonders if Britt can be trusted.
Michael tries to assuage Willow’s guilt.
Maxie and Brook Lynn discuss whether to work together.

Carly meets with Brick.
Ava and Nikolas are at odds.
Sam arranges a visit for Jason with Danny.
Joss lies to Portia.
Laura cautions Scott.

Josslyn and Trina have a heart-to-heart.
Nina surprises Sonny.
Ava presents Carly with an offer.
Cameron confronts Jason.
Alexis is surprised by what she finds at her new job in Pentonville.

Britt tells Finn she’s spoken to Liz about her status at GH.
Ava and Nikolas prepare to host family dinner.
Laura faces off with Cyrus.
Jordan faces an unlikely suspect.
Nina is desperate to protect her new life.