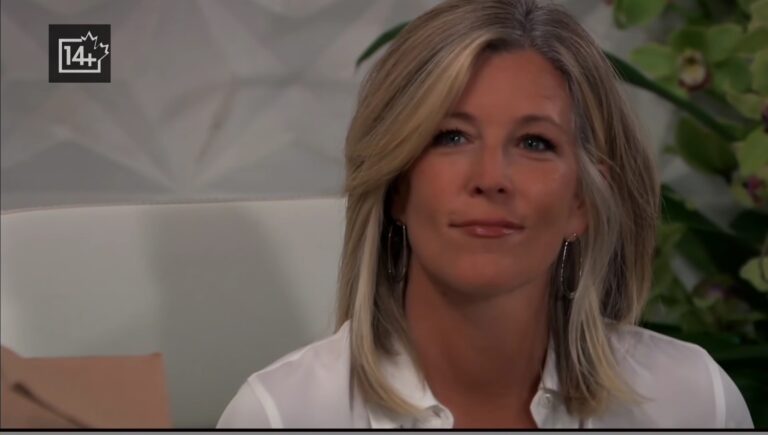 General Hospital recap for Friday, July 15, 2022. In today’s GH episode, Laura has to leave town for an emergency, Stella reassures Portia about her mothering, and Trina tries to keep Joss quiet.

We also have Thursday’s GH recap where Valentin saved Laura from an assassin and Diane took over Trina’s case.

At General Hospital, Spencer catches Laura worrying to Nikolas. She explains that Lesley’s house in Lake Como has burned down and asks them to promise to behave with each other if she has to go away.

Kevin pops up and escorts his wife away for a meeting. She worries that taking off will make her job performance look worse than it already does. Her husband assures her they can handle this and offers to go with her.

She feels lucky to have his support, but she needs him to stay there. He’s one of the few people who can keep Esme in check. They hug. Nikolas comes over after making flight arrangements for her.

Once Nikolas and Spencer leave, Laura gets the feeling she shouldn’t go.

Drew drops by Carly’s office and jokingly offers to help move all her stuff. They decide on lunch but she can’t go to the Metro Court anymore. The silver lining in this mess is that she knows she’s not alone. He offers to carry her box.

They go through some old photos and she chokes up when she sees Morgan. He reminds her of when she hired him as a bartender. They marvel at how much their lives have changed since then.

She’s still working on letting go. No matter what was going on in her life, the Metro Court was her constant. They hug.

Olivia isn’t thrilled when she catches Nina asking staff about operations. She’s tired of watching this and offers to buy her out. Nina says her half of the Metro Court is not for sale. Sonny pops up and asks why.

Nina makes it clear that she doesn’t plan to sell to anyone. She wants to be her partner. “Not on your life, lady!” Olivia declares, ordering Sonny to do something about this. Nina says it has nothing to do with him. Running the hotel is between them.
Liv says it’s between their lawyers and storms off. Sonny tells Nina she brought this on herself and should have expected it.

She’s determined to keep the hotel to pass on to Wiley. He wonders if this is a business decision or a way to stick it to Carly.

She can’t believe he thinks she’s so petty. He says they can drop it. She reminds him she bought it to give it to his ex-wife. If anything, he should be scolding Carly. She notes that Carly is still throwing a shadow over them.

Olivia stops by Carly’s office with flowers for the staff. Carly is moved but she doesn’t want a send-off. Her friend explains Nina has decided to remain co-owner. She will never get her loyalty.

Liv tells her how much she appreciates her and loves her as a friend. They both tear up and hug.

After Olivia leaves, Drew returns and Carly tells him how much she will miss this place. She needs a minute alone. When she is, she looks at her name on the door and takes it down before turning out the lights.

As Drew and Curtis exit the building, Sonny asks if she’s okay. She looks at Nina and flashes back to learning Willow is her daughter. “I’m okay, I have my family,” Carly says, walking out.

Ava bumps into Marshall and Curtis on the launch. They ask her help and explain the phone situation. She happily heads to the island to “throw the witch under the house.” After she takes off, Curtis paces and feels like he’s not doing enough.

As they wait, Curtis brings up his arrest. Marshall tells him an anecdote about his old neighborhood and the barber who was “touched.” Everyone started to avoid him and he never got the help he needed.

Being institutionalized may not have been ideal, but at least he got a diagnosis out of it.

He notices the last time they had a breakthrough was on the pier. Curtis appreciates all the progress they’ve made.

Esme is not happy when the bartender shows up at Wyndemere.

She threatens to call security. He’s sure the cops would love to heart from him.

As they bicker about this, Ava arrives outside.

Esme asks him who followed him to the hotel and can connect them. She’s startled when she hears Ava’s phone ring.

After Ava tells Avery she’ll see her later, she bursts in on Esme, who is sitting on the couch doing her nails.

Ava lectures her about safeguarding the fabric. Esme assures her that she’s so careful when she uses her things that she’d never know she did. “What the hell is that supposed to mean?” Ava asks.

The Jerome asks her how much it will cost to get her to sign a confession.

She offers to fly her anywhere in the world to avoid justice. Esme acts offended. Ava hopes she’ll be opportunistic enough to take her offer.

Esme tells her she’s about to lose Trina for five to ten years.

Nothing Ava could offer would make her give up the family she has found since she’s arrived.

Nikolas and Spencer arrive. The prince asks his wife what she was offering. The couples split up.

Esme tells Spencer about Ava offering her money. He says it’s too bad she doesn’t know what she really wants. He does.

In the hallway, Nikolas asks his wife if getting into it with Esme is worth it.

She tells him Esme will be out of their lives soon. As soon as he walks away, she calls Curtis to say that the bartender escaped.

At Portia’s, Joss tells Trina she needs to use her evidence. It could be a game-changer. Trina won’t explain and tells her mom she has faith it will all work out. Stella wanders in to say faith is what they all need. Joss rolls her eyes.

Left alone, Portia tells Stella that she is not going anywhere near the courthouse. It’s a high pressure situation and it wouldn’t be healthy for Stella. She can stay home and pray. Curtis, Taggert, and Marshall are on it.

They debate whether justice is possible. Stella is sure the arc of justice will bend toward their girl.

Portia prays she’s right. She doesn’t want to walk around with all the bitterness and hatred she has for Esme.

Portia assumes this is about Trina being black.

Stella tells her that the world is wising up. The doctor worries that she didn’t prepare her daughter for any of this. She bursts into tears and feels like a failure. Trina’s had a sheltered life.

Stella is sure that Trina is pretty savvy about the world.

You can’t completely shield your children from pain and injustice. She’s taught her what’s really important: to keep her head to the sky and fight.

On the patio, Trina tells Joss she can’t use what she knows yet.

Joss isn’t sure she can keep quiet. Trina isn’t ready to send Spencer to prison when it might not even help her.

Joss points out that Spencer is keeping silent when he could give her an alibi.

Where is his compassion? Trina makes her promise to let her decide what to do.

Reluctantly, Joss agrees to stay silent unless things go wrong. If they do, no one will stop her.