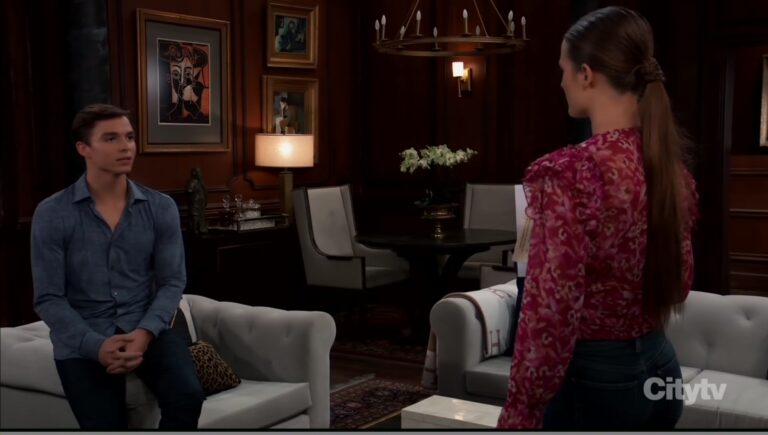 General Hospital recap for Monday, July 18, 2022. In today’s GH episode, Nina learns that Willow is pregnant, Michael rubs his news in Sonny’s face and Brando vents to TJ about Sasha.

We also have Friday’s GH recap where Ava tried to buy Esme’s confession and Carly said goodbye to the Metro Court.

In the steam room, Brando vents to TJ about all his problems with Sasha. He can’t believe he didn’t understand what was happening earlier given that he was an addict. He loves her but he can’t help her unless she helps herself.

Brando doesn’t know what to do next. TJ says it won’t be easy but everything will work out.

At Volonino’s Gym, Sonny and Dante talk about Carly losing her share of the Metro Court. He hates that things have panned out like this and Carly’s attitude is spreading.

Dante reminds his father he didn’t choose to lose his memory, but he did choose what happened next. He admires him for not hating Nina. That’s the only way to heal. They discuss how experiences change you and you can’t deny your feelings.

Sonny tells him that Nina is Olivia’s new partner and goes over the details. This resulted in him fighting with Nina about Carly’s ongoing shadow over their relationship.

Dante explains Carly and Michael will never forget what Nina did. That history will never go away.

Michael shows up. Sonny is ready to walk away but his son stops him to announce that Willow is pregnant. He makes it clear that Sonny will have no place in his child’s life. “We need you to stay the hell out of our lives,” he says.

When he gets in his father’s face, Dex jumps between them. As things get tense, Brando pops up and makes Dex back off.

Dante leads Michael away and suggests he was looking for trouble. He thinks this was a backhanded way of telling Sonny his news. After they bicker about this, Dante congratulates him on his news. He can’t wait to be an uncle again.

Brando takes Sonny aside and offers him any help he needs. Sonny appreciates it but thinks he has enough to worry about without looking out for him. Brando glares over at Dex.

Nina is in the graveyard when Olivia calls and informs her that a Metro Court staff meeting is about to happen. Obrecht appears and asks if she’s made a career change.

Nina fills her in and admits the whole plan almost backfired and nearly ended her relationship with Sonny before it even got started. The minute Carly was in trouble, he ran to her rescue.

Besides all this, even if buying half the hotel wasn’t intentional, it is a great business opportunity. Carly had her chance to have it back and refusing it is her own fault.

Nina still worries that choosing to get involved with the hotel will bring her nothing but misery.

Meanwhile, Willow stops by the graveyard to visit her dead child’s grave. Every day, she wishes he was still here and driving everyone crazy in the best possible way. The good news is that he is always with her and will always be part of her family.

She’s sure he would make a great big brother to the new baby. “New baby?” Nina asks as she and Obrecht approach her. They immediately begin bickering. Tait gets a call and takes off.

Nina declares this pregnancy is another win for Carly.

When Willow gets to General Hospital, TJ reminds her they ran a series of tests. They didn’t only show she was pregnant.

In the courtroom, Joss complains to Diane that this is all a waste of time prosecuting Trina when they know who the guilty person is.

When mother and daughter are left alone, Joss says she’s ready for this and the jury will hear that her friend is innocent. Carly is sure that Trina will get through this with amazing friends like her by her side. They wonder where Cam is.

Outside, Portia and Taggert tell Trina that she is a “strong kick-ass woman” and they “can do this.” Any sane person will know she isn’t guilty just by looking at her. Taggert reminds them Curtis has been chasing down a lead.

He shows up and they hope he has the proof they’ve been waiting for. Curtis explains they are still working on it. Trina points out they are out of time. Taggert leads his daughter into the courtroom and Curtis apologizes to Portia. She’s grateful he tried.

In the courtroom, Diane and Ava give Trina a pep talk and assure her she will beat the charges. Ava hands her lucky necklace and tells her she would go to the ends of the earth for her.

Joss and Cam join Trina to offer their support. They hug her. Their parents admire how closely bonded they are and Carly says Esme will regret the day she ever messed with their kids.

Diane advises Joss and Cam to answer truthfully and she will make it work. Judge Young arrives and the case kicks off. ADA Arden makes her opening statement and then calls Cam up.

He recounts the night in the cabin and has to admit that Trina was the only other person there while they were having sex. Diane questions him about his relationship with Trina. He explains they never dated and are just friends. He believes in her.

Joss is called up next. Arden gets her to recount the night in the cabin and the drinking game they played. Joss quickly starts refusing to answer her questions directly and the ADA gets permission to treat her as a hostile witness.

Arden gets Joss to admit that Trina was upset about her dating Cam and didn’t see her sleeping, only has word on it. She trusts her with her life. However, she can’t attest to her whereabouts.

At Wyndemere, Spencer surprises Esme by announcing that he has tracked down her birth mother with help from his uncle Victor. Her mother is in Portugal. She’s not sure why that seems fitting. “My father? Did Victor find him too?” she asks.

She thinks this over and asks why he did this for her. He explains he got the idea from snooping on her private letters to Maggie and wanted to make amends for accusing her of filming Joss and Cam.

She’s amazed that he has made the impossible possible. Esme claims that this is everything she’s ever wanted… but how does she know it’s real? He explains that he had a DNA test done and hands it to her.

She’s thrilled but there is no name on the file. “Esme, you are the last person that I did this for,” he says, explaining that if she wants this information, she has to give him what he wants. Spencer asks for Trina’s freedom.