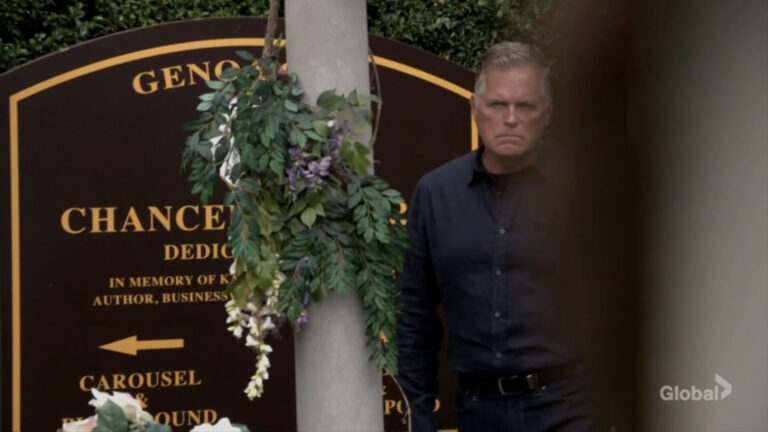 In this episode of CBS’ The Young and the Restless, Adam has a warning for his family, Jack reveals he loves Phyllis still, while Lily wants to buy Grand Phoenix.

In the previous episode, Ashley, Nikki and Phyllis schemed to get rid of Diane, and Allie admitted to Jack that she felt overwhelmed.

Nick and Victoria drink red wine at Society while they disagree about how Adam’s been selfless a few times. Victoria scoffs and then thinks Adam has some revenge plot or something planned.

She can’t buy that he’s walking away from the company. She calls him a dark cloud hanging over Newman. It won’t change. Nick shrugs. Their brother has made significant strides in good behavior.

She gets it but can’t see a lot of good in him. She lists his character flaws. He sees her way of thinking.

Adam stares at Victoria’s portrait at Newman. Victor finds him and hopes he’s decided not to step away from Newman. Adam says he hasn’t, and Vic asks what it’ll take to keep him on.

Adam says nothing. He chose to keep Victoria on instead of him. He’s only there to talk to Victoria about Sally. Vic knows he dumped her. Adam assumes he’s glad for that.

He hopes the family will give her a chance now. Victor outright asks if he dumped her to protect her position at Newman Media. Adam denies it. Things weren’t working out but he doesn’t want to see her punished.

Victor doesn’t believe him. It pains him that he goes to such great lengths to ensure she’s got a job but doesn’t got that far for his own family. He asks for patience but Adam laughs and calls him a puppet.

Victor’s puppet. He’s always shown to be a second class citizen in this family. “I’m  not good enough to be a real Newman, but you know what?  Not anymore!” Victor’s upset by this.

Adam says that he and everyone in the family is used to getting their own way but some people have limits and won’t accept defeat and go “quietly into the night,” like Ashland, he says.

He warns that they’re all in for a rude awakening. He details the nasty things Vicky did to Ashland and Victor thinks “that bastard deserves more than that.”

Adam says she motivated him to seek retribution. “Now he’s out on bail and he’s gunning for a fight.” Vic asks if he saw the man. Adam thinks his dad should be thanking him for letting him know but Victor doesn’t see Locke as a threat.

He asks his son to take time off and come to his senses. This is where he belongs.

With his family. Adam gives up. There’s no getting through to him. “Ever.”

He likes her and he can’t recall ever feeling comfortable and relaxed with someone so fast. He wonders if it can go anywhere. Sharon can see that he’s used to a different kind of woman, who has more baggage than Allie.

She’s not judging. Maybe he thought conflict in a relationship is normal, when it doesn’t have to be. Noah starts to think a healthy relationship sounds appealing.

She asks him to tell his father about New Hope before his date tonight. Noah doesn’t like that idea.

Ashley finds Allie reading on the sofa at home. Allie wants to be prepped for Jabot. Ashley loves that she’s at home in the lab like her dad. Ashley checks in on how she’s feeling.

Talk turns to her finding out Diane orchestrated her being in the family. Allie’s smile falters. Ashley calls her a gift to them all but thinks it’s overwhelming. Allie can see that Ashley wants intel on Diane.

She says Phyllis asked questions about the family and Jack and then Diane came for her own fishing expedition and now Ashley. “I’m curious,” Ash says.

She’s sorry if she’s made her feel uncomfortable but needs to know how manipulative the woman is. “She used you to get to Jack to help reunite with Kyle.” Allie knows.

Ashley doesn’t want to see her get used again. Allie says she may seem innocent but she’s not. She won’t let Diane, Phyllis, or Ashley manipulate her. She heads upstairs, gets ready and returns with an apology for sounding harsh. Ashley respects strong, independent women.

Phyllis calls Jack over in the park. She learns he has a meeting later with the Marchetti members who came in from Italy. She says they’re staying at her hotel.

She brings up Ashley and her seeing eye to eye about who Diane is. She asks if his stance on Diane changes because he respects his sister’s opinion. Jack thinks this is more about them.

Phyllis insists Diane was never more important than her feelings for him. He stammers and then claims he has to get to the office.

Lily finds Phyllis at work and says she’s about to make her an offer. She talks about how Devon selling GCAC too soon caused an issue. Phyllis can see she needs a collaboration.

Lily wants to buy her hotel and make it a Chancellor-Winters entity. Phyllis is surprised.

She called this place The Grand Phoenix because she rose from the ashes. It was a slap in the face to those who doubted her.

Lily knows. She touts what Phyllis has done to this place and says with the money, she can do what she wants. Phyllis isn’t ready to step away. Lily hands over a proposal and Phyllis’s eyes widen at the sum.

It’s lucrative and persuasive but she refuses. It’s not about the money. Lily grins. “Alright.” Jack turns up and Lily leaves her with the offer while Jack says he’s meeting Marchetti staff for dinner.

Phyllis will make sure they get everything they need and then asks for business advice on the offer Lily gave her. His eyes are as big as saucers as he sees the significant above market value offer. She loves running this place and proving she did something successful.

She has a lot of good memories there.

He agrees. “Some, not so much.” He calls it a personal decision.

She doesn’t feel like she belongs in Genoa City anymore. He thinks she’s trying to back him into a corner. She tells him the fact that she loves him means nothing to him? He says of course it does. He still loves her. Why does she think it hurts so much?

Adam finds his siblings at Society and asks after Sally’s job. They inform him they’re keeping her on. He refuses to discuss the break up. Nick assumes it’s a touchy subject.

Victoria grins, even when Adam tells her she should “worry more about the hell that is about to rain down on you.”

He tells them that dude’s on the warpath and that he visited the man at GCAC to try to see if he wanted to help sabotage Newman. Victoria laughs, wondering why he’d admit to it.

Adam says his agenda came to a halt when he learned Ashland’s not interested in the company. He’s out for blood.

Victoria’s smile falls as her brother stares directly at her. He tells her that the man trashed his hotel room. “You think he’s coming for me?” He’s not sure but she needs to be on guard.

Nick thanks his bro. Adam doesn’t want to see anyone get hurt. Once he’s gone, Nick asks her to move to the ranch for now. She can’t imagine him hurting her but will think about the move.

She won’t let Ashland scare her. Noah calls and he reluctantly agrees to meet, but worries that Victoria’s going to go for a walk. Alone.

Nick arrives at Crimson Lights and Noah takes him to the patio and invites him to sit. Nick worries he has bad news.

Victoria walks through Chancellor Park on a call, by herself. She gets the feeling she’s being watched and looks around. She appears worried and makes a run for it. Meanwhile, Ashland’s watching her from the trees, and he’s not happy.