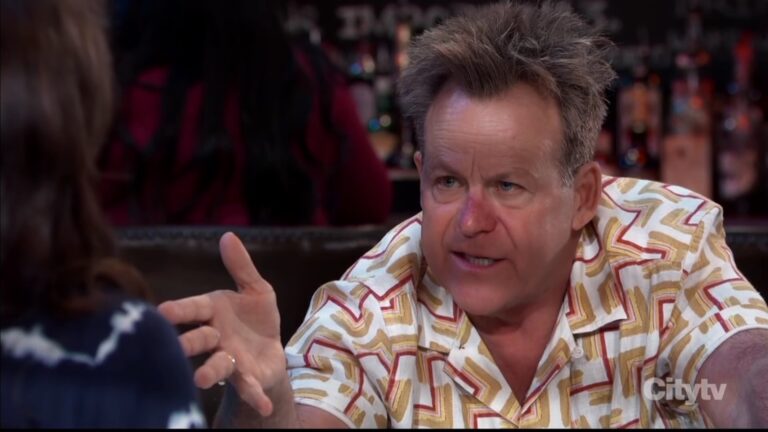 What’s coming up on General Hospital this week? Spinelli issues a warning, Cody is startled by someone, Martin is coerced, and the jury prepares to come back with a verdict.

In this week’s spoiler video, Carly looks for ways to get back what she’s lost, Ava vents to Nina, Sonny has some doubts, and Dante and Sam disagree about Cody.

Nina tries to woo a new chef to the Metro Court, before receiving a hand-delivered gift from Obrecht.

Dante wants to know what Brook Lynn is up to.

Spinelli urges Britt not to go on another date with Cody.

Cody overhears Spinelli and confronts him, then makes threats.

Sam presses Maxie for answers as they discuss her moving in with Dante.

Michael doesn’t want to do what Dex suggests.

Cody has a startling reaction to a familiar face. He punches Scott out while Britt and Obrecht gasp.

Sonny and Nina discuss the realities of their relationship.

Sonny thinks Nina’s dumping him but she reminds him that technically they’re not even together.

Scott questions Ava about the divorce.

Nik interrupts Ava with Scotty and wants to talk privately.

Anna tells Felicia that she is determined to discover what Valentin is hiding.

Victor asks why Laura is still alive and Valentin reminds Vic that she’s in Italy, not investigating.

Cody reveals some of his background.

Maxie tries to get to the bottom of Spinelli’s feelings.

Sonny has a talk with Spencer.

Nikolas and Victor attempt to convince Alexis to work for Spencer’s cause.

Anna tries to coerce Martin into helping her.

Scotty barks at Cody, hoping he’s not waiting to get money from Serena, because it’s all gone.

Austin tells Maxie he knows how important her family is.

Maxie asks if Austin’s ready for a family.

Austin has to quickly reschedule a date to go away.

Spencer remains adamant about a decision.

Joss and Trina try to distract from their concerns about her trial with a day at the pool, but they can’t escape it.

Portia’s plan is really risky. They want to wake Oz from his coma.

Jury is ready with a verdict.

Britt checks on an injury.

Rory is faced with a tough assignment.

Curtis is concerned about Portia as the jury in Trina’s case becomes more likely to return with a verdict.

Trina asks TJ if they can wake Oz up.

Trina worries that she’ll be in jail by dinner.

Jordan continues to investigate as time is running out.

Dante listens to Cody talk about being a Stanton, not a Bell.

Dante tells Cody that he didn’t always know Sonny was his father.