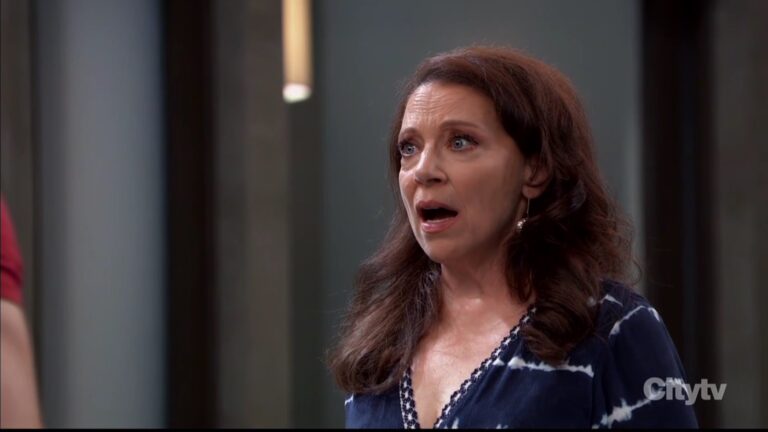 We also have Monday’s GH recap where Michael refused to resort to jury tampering and Cody threatened Spinelli.

By the pool, Cody brings Britt a drink and notices everyone else has taken off.

She asks what’s going on between him and Spinelli. He claims that Spinelli is just into her but he won’t be bothering her anymore.

When he asks where they will go for their second date, Obrecht pops up and asks who he is. Reluctantly, Britt introduces them and Liesl goes on about her daughter’s many beaus.

They send him off to fetch a drink and then Britt accuses her mom of making her look pathetic. Liesl wanted him to think he had competition and starts needling her for details.

She thinks he’s handsome. Britt says he’s far from a mother’s dream and smells like a horse. Obrecht tells her to have some fun with him.

She’s surprised when Cody returns and admits he was the stuntman who fell on her daughter. She thinks that sounds exhilarating.

After Liesl leaves to find her “schnitzel,” Cody tells Britt how great she is.

At the Metro Court, Sam and Dante discuss how Spinelli feels about Britt. They both think she is too cold and vicious for him.

The cop thinks she’s using this to avoid discussing them moving in together. She’s been thinking about it and has some questions.

He says there is a lot of room at his place and it’s close to school, but he guesses she’s not comfortable there. “It’s Lulu’s home,” she says. She knows he had lots of unfinished business with his ex.

He says that Lulu’s whole life is unfinished. He will likely always miss her but the part of them that was a couple was long over. Sam thinks they’ve avoiding discussing this so they wouldn’t rock the boat.

He loves her and wants a life with her and will wait until she’s ready to move in. The cop gets a text and has to leave for work.

Drew meets with Mia (played by Vanessa Mathison) his executive coach to discuss his plan and how everything went wrong with ELQ.

He says it wasn’t a failure, just a setback and he’s determined to make Aurora come back stronger.

Valentin arrives and says hello to her, gloating about how well his business is going. As the men bicker, Carly arrives and trades some barbs with the Cassadine.

Carly is meeting with Mia so Drew steps away. They discuss executive coaching. Carly wants to get back what she’s lost and more.

After their meeting ends, Drew returns and chats with Carly about how his last business plan failed. If he hadn’t been so caught up in trying to prove himself, he wouldn’t have messed up.

Mia would encourage him to go after what he wants. That means no longer being mister nice guy. He won’t become a real jerk, he assures her.

She tells him how charming Mia thinks he is. Carly still needs to figure out what’s next for her. He’s sure there will be no stopping her.

Valentin finds Victor having tea and chatting on the phone to the governor about Spencer’s situation. When he threatens to re-think his campaign donation, the governor offers to reconsider.

Valentin joins him and Victor gloats about speaking to Charlotte. They chat about her and how she’s thriving in her new school. Valentin demands to know why he’s keeping her as leverage.

They argue about how he’s been handling the Laura situation. Victor worries he may not be as cooperative as he claims to be.

Valentin insists to his father that he has Anna in hand. She may be asking questions but they understand each other. Victor is not convinced by this.

After he walks off, Valentin heads for the door only for Drew to stop him. “We need to get a few things straight,” he says.

Anna and Felicia arrive at the gym. Anna would rather have tea and scones but Felicia is feeling old. They worry about Mac retiring and driving her crazy at home.

Felicia is feeling restless and her friend asks if she’s thinking of going back to PI work. The blonde wonders if she wants someone to dig into what Valentin is up to.

As they workout, they discuss some holes in Valentin’s story about his absence. Anna isn’t satisfied with his explanations. But they always withhold stuff from each other.

Something went on and she doesn’t know what it was. But he’s smart and challenging and sexy. Mystery is part of the package.

Anna wants to look past all the unanswered questions. Felicia encourages her to trust her instincts. Her friend is still determined to find out what Valentin is hiding.

Ava meets with Scott on the patio and they chat about his daughter. As they get a table, he tells her how well things are going with Liesl.

He asks about her divorce and whether she’s given up on that plan. She tells him the divorce is happening.

The lawyer wonders what he’s missed. She doesn’t know where to start. Nikolas pops up, eager to speak to her alone. She yanks out the divorce papers and signs them as he protests.

The prince asks again to speak to her in private. It’s about Trina.

Scott steps away and Nikolas explains that his son is searching for Esme. That’s why they need to stay married.

It’s only a matter of time until her body is found and Ava will have had motive to have killed her.

When Scott returns, Ava says they are not getting divorced. The lawyer doesn’t get it but tells him to take care of her and takes off.

Ava admits to Nikolas that he’s right about how suspicion would fall on her. It is for self-preservation alone that she is remaining his wife. That doesn’t mean she will live with him though.

Liesl and Scott arrive at the pool. They see Cody and Britt are still there. Cody recognizes him and punches him in the face.

Sonny meets with Nina at Charlie’s. She reminds him that their last conversation was about how Carly will always be in their lives.

Sonny says that the only opinions that matter are theirs. She reminds him they aren’t the people who lived in a bubble in Nixon Falls.

She has to give up this fantasy that he’s her safe haven. He says they can build on their past as long as she’s willing to take a chance.

Smoltz pops up and asks them for a comment on Sasha. Nina has to hold Sonny back. They chase him out. Nina says this just proves they can’t avoid the rest of the world.

She decides that he’s worth it and they can face the world together. She’s damn proud to be with him and is sorry she’s hesitated. They kiss.