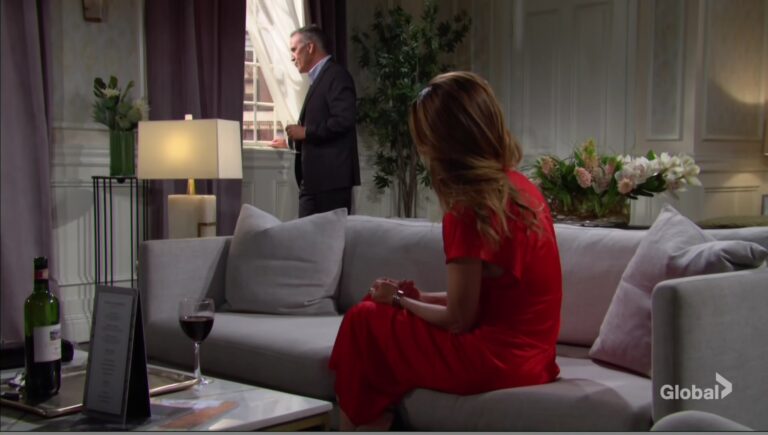 This is the Canadian Y&R day ahead recap from the Friday, June 11, 2021 episode, which airs in the USA Monday, June 14. In the previous episode, Tara turned down Lauren’s job offer, because she couldn’t handle working and going through a divorce, she claimed, and in today’s episode, Kyle meets a handsome father and his son, Ashland and Victoria talk about his bad news, and Summer is impatient with Tara.

Jack arrives at Crimson Lights, surprised to see Summer. She could have stayed with them but Summer did some wedding planning. Jack’s thrilled they moved the date to August. She debates what type of cake to use and he thinks it’s a question for the groom. He invites her back to the house.

At the house, Tara tells Kyle that the custody offer came in. Things look like they will be resolved amicably. She theorizes that it’s because Ash is spending time with Victoria Newman. “Wow,” Kyle says. Tara thinks he may be losing interest in punishing her.

At the hotel in New York, Victoria notices Ashland seems distracted. They drink red wine and talk about her time in Italy. She asks if he’d do something like that. He lets her know he heard from his doctor and it turns out it’s too late for that. For a lot of things. He tells her that they did an x-ray when they found small cell lung carcinoma in the advanced stages. “They’re giving me six months.” Victoria whispers, “Oh my God. Ashland. I’m so sorry.” He says there are treatments with a 10% success rate. He doesn’t want to prolong his life if he’ll be miserable. He doesn’t want to put his kid through seeing his father frail, in pain and suffering. He didn’t tell her because he didn’t think she’d believe him. “You never would have invented something like this,” she says. He’s glad she has that outlook of him and apologizes for dumping this on her. They barely know each other. He feels she’s not a stranger at all. She asks if this changes things with Tara. He says it’s why he’s not going after full custody. Vikki asks if they could reconcile. “Til death do us part?” Ash says it’s too late. Harrison’s young and he’ll miss him for a while but in time, memories fade and he’ll forget about him. He’ll grow up thinking Kyle’s his dad. Ash calls Kyle sincere but gullible. Ashland asks if Summer will be a good stepmother. Victoria has no idea but knows she likes kids. Her family will support them. Later, Ash jumps on a call for business. He apologizes to Victoria later. She shrugs it off and tells him to make every moment count.

At Society, Sally and Lauren discuss work and Lauren’s meeting with Tara. Lauren calls it a “get to know ya.” She’s not ready to commit. Sally offers to chime in with her own sales pitch. Lauren asks how things are going in Genoa City for her. Sally thinks they’re going great but Lauren notices she’s subdued. Is she pushing herself too hard? Sally admits it’s because Phyllis is determined to see her fail. Lauren doesn’t think she has anything to worry about. Phyllis wanted a win-win and looked at promoting her to another job in Los Angeles. Sally’s stricken, but glad Lauren didn’t take her up on this. Sally asks to take off early and Lauren tells her to go have fun.

At home, Abby tells Nina there was a sting operation in Vegas and six people, including a federal agent, were rushed to hospital. “Oh my God, what if that was Chance?” Nina asks why she thinks Chance is involved. Abby says he was there before. She prepares to call Christine to talk to her about Chance’s whereabouts. Nina goes to get her a cross-stitch. Sure, it’s not sexy, she tells Abby but she’ll teach her how to do it. They cross-stitch together and an unknown number calls. Abby doesn’t pick it up but instead worries. She answers and it’s Chance. She’s relieved to hear his voice until she hears him yelling and then the line goes dead.

Summer arrives at the house and as Summer tries to get Kyle to help with the wedding, Tara says afterward, he can play with his kid. Summer asks to tag along and Kyle likes that idea. Jack tells Kyle there’s a situation at work. Summer glares at Tara. The men will be back shortly so Tara asks Summer to stay and get acquainted. Tara gets pumpkin bread and tea for the ladies to eat and talks about the wedding. Summer gets defensive that she and her fiance have it under control. When Kyle returns, Tara says Summer had to go to the office. Tara tells him that their talk went well and that she knows their kid is their top priority. Kyle touts how wonderful Summer is. Harrison appears, ready to go to the park.

Sally calls someone about her trip to L.A. Jack sees her leaving the hotel and she tells him she’s going for personal reasons. He asks if she’s moving. “Would you be happy if I did?” He assumes she might like the pace there. She likes the pace in Genoa City and accepts that the two of them won’t get together.

Kyle meets a man and his child in the park (Keith Carlos and his real-life son) and while Harrison and the other boy go off to play, the men talk about being fathers. Later, the gorgeous man is gone and Jack appears. They discuss the custody case and that Locke dropped everything as they watch Harrison play. They share a tender moment between father and son. Later, Jack’s gone and Summer appears. They talk about how he made himself a fool on the jungle gym. Tara turns up with a jacket. Tara will have to make the most of her life there. Kyle says he’ll help and when Tara looks at Summer, she glares.

Sally shows up in L.A. to see Eric Forrester, (John McCook, B&B). He asks why she’s there. She’s just about the last person anyone wants to see there. She asks for ten minutes. He hopes this is not one of her schemes. She lies that it’s not. She wants to help a friend, Summer Newman. Eric says if she wants bigger and better, she could go to Newman Enterprises. Sally says they’re not involved in beauty or fashion but she wants that opening at Marchetti in Milan. She can’t pursue it herself as it’d look disloyal but if they pursue her, it’d be different. “Leaving my name out of it, of course.” Eric asks why she doesn’t go for the job. Sally covers. He’ll give it some thought and tells her that her time is up.