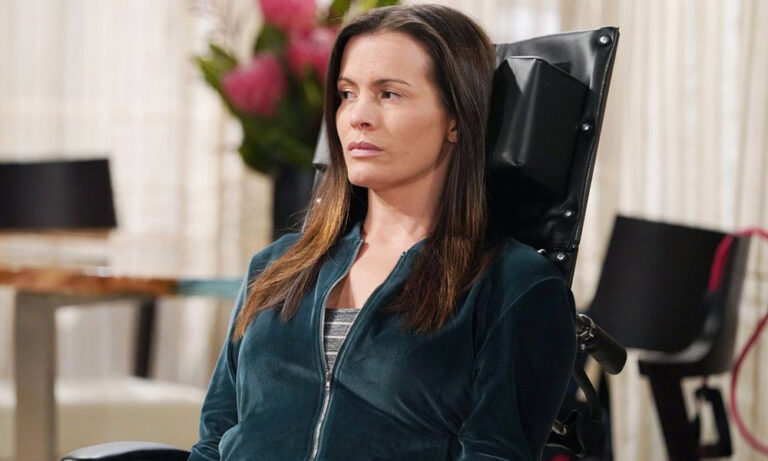 Soaps Spoilers has the Young and the Restless spoilers for the week of March 8-12. But before we dish on those, let’s talk about what happened this week on Y&R. Now that we’re able to write the Y&R Day Ahead Recaps for you, we want to share where you can find them daily at around 5:30 PM EST. This week Summer spent a lot of time trying to talk Phyllis into cracking Kyle’s phone so she could figure out what he was keeping from her. In a shocking twist, Phyllis said no. We were as surprised as you. Instead, she urged her daughter to talk to Kyle. Summer did just that and wound up learning that Kyle’s a father. Meanwhile, Elena and Devon couldn’t stop thinking about their sexy night together and Elena looked close to dumping unsuspecting Nate. Meanwhile, Chelsea fantasized about shooting Adam and worked her butt off to get out of that chair. And. She. Did. Melissa Claire Egan was interviewed with Soap Opera Digest about her current story and the challenges she faced.

On with spoilers for Y&R for Monday, March 8 to Friday, March 12.

Doug Davidson out as Paul Williams, the actor states.

Lily and Billy can’t get their mind off of Ashland Locke’s business deal.
Lily tries to get Billy in the sack.
Kyle is sickened watching Sally kiss his dad. Summer distracts him with sex.
Devon is at a crossroads, not sure what he wants to do about his women.
Devon and Elena agree to meet.

Though he’s been warned not to, Jack’s getting more involved with Sally.
Summer makes a move to distract Kyle from Ashland and Tara.
Devon is finding that he’s at a crossroads and may be forced to choose between his past in Elena and his future with Amanda.

Getting to know Richard Burgi as he appears on Y&R as Ashland Locke!

Victor is prepared for battle, taking revenge on Billy.
Nikki questions Victoria’s ability to make a decision and tries to lead her on the right path.
Lola tries to step things up to comfort Faith.

The feud between the Abbott men and the Newman men is reignited.
Ashland Locke (Richard Burgi) and Tara finally arrive in Genoa City for Ashland’s business dealings.
Kyle meets Ashland.
Sally hounds Tara for information.
Kyle wants Sally to keep away from Tara.

Ranting about this week in Genoa City! Y&R opinion column!

Elena and Devon face a struggle in finding closure.
Elena and Devon have sex.
Rey and Sharon have therapy and some issues come up that make her cry.
Rey becomes very ill and passes out on the sofa.
Abby plans for her future with surrogacy.
Victoria catches Billy off guard. She tells him she still loves him!

Coming up the week of March 15

Rey becomes extremely ill and Sharon must bring him to the hospital.