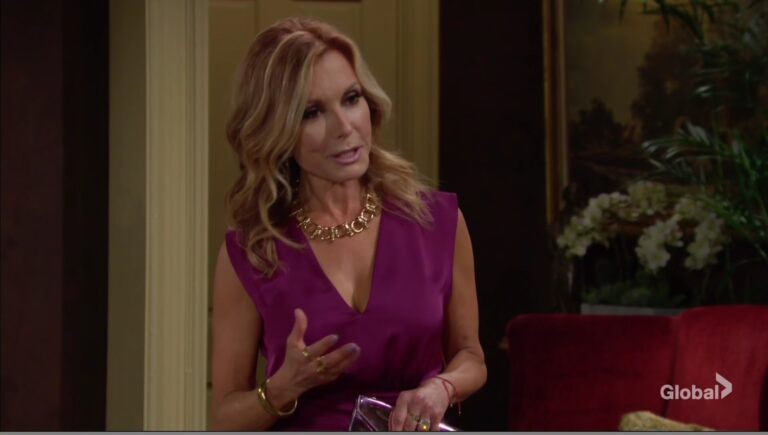 This is the Canadian Y&R day ahead recap from the Thursday, June 10, 2021 episode, which airs in the USA Friday, June 11. In the previous episode, Ashland backed down from his ultimatum, and in today’s episode, Amanda invites Sutton to fire her, Lily and Billy discuss the children’s rooms, and Tara turns Lauren down.

At the Abbott home, Tara worries to Jack when she learns Ash is making a trip back to New York to talk to his lawyer.

At ChanceComm, Billy and Lily talk about getting sheets for the kids’ rooms. She wants them to feel at home and recalls the twins at their age having rooms that were a disaster. She teases that she can’t see him leading by example in making his own bed since he was used to the maid service. They ponder why Victoria went to New York. Later, Devon shows up and shows her some cool musical instruments he bought for the kids. She hopes one of the kids has talent. Devon set it up at her place already, making Liily grateful. They talk about Billy’s kids coming over and she hopes that they like her. Devon thinks she’s not buying them but being the cool older person in their life. Devon gives her earplugs. “You’ll need them!” They discuss how Victoria feels about the move. Lily thinks she’s fine with it.

Amanda asks why Sutton is shutting down her case strategy. It doesn’t work for him. She knows he was worried it’d bring up bad memories for Naya, but they already faced her. Now they could just recount what happened. Sutton insists it isn’t an option and Amanda demands to know why, when the alternative is prison time. He wants this to go away. Naya and Imani look around, glumly and silently. Sutton doesn’t think Amanda’s doing her job. She counters that she’s offering him the best defense. Sutton has made himself clear. “Then maybe you should fire me,” Amanda says. Sutton loves that idea and takes off. The women huff a sigh and Naya apologizes. Imani warns her sister that he wouldn’t go along with this. Naya offers to talk to Sutton. She goes and Imani says she liked seeing her sister in action. Amanda is starting to think they’re all lying to her and asks Imani to come clean. Imani claims she’s just as baffled by Sutton’s behavior. Amanda takes off in anger.

At Society, Summer asks Sally why she’s been probing her team members at GCAC. Sally says she hears she’s been crushing it though occupied the last few weeks. Sally hopes she’s okay and knows she’d be distracted in her place. Summer tells her that she and Kyle will marry in August. Sally brings up the first time Summer went to LA to find dirt on her and that she’s been protecting herself since. They talk about Sally possibly playing the victim and Sally counters that she doesn’t have a trust fund to fall back on. Summer hopes she moves to Milan and takes that job. Lauren walks in as she says, “Cause that’d be a dream come true.” They tell her about the Marketti job. Lauren’s talking to a new designer about a possible collaboration — Tara Locke. Sally calls herself a huge fan. She’d be a great addition. Lauren goes and Sally rubs it in Summer’s face that Kyle is helping Tara put down roots in Genoa City. Later, once alone, Sally leaves a message for Eric Forrester about Summer Newman and asks him to return her call.

“The supply chain is a mess,” Jack says to someone on a call. He disconnects and Kyle apologizes since he hasn’t been pulling his weight. Jack brushes it off. Tara appears. She’s going butterfly hunting with Harrison. They talk about what Ashland might be up to in New York and she takes off. Jack and Kyle talk about not putting the wedding on hold. Jack’s thrilled. He wished Tara was more relaxed the way Kyle is. Kyle thinks she has good reason to since there’s something in her past that Jack doesn’t know about. Ashland accused her of neglect when she went out and left the kid with a nanny when he fell and cut himself. Jack thinks Kyle’s lawyer should look into it. “We don’t want any surprises.”

Jack sees Billy in the park and Jack accepts his apology for the other night. They discuss Harrison as Jack’s grandson and how happy he is. Jack can’t wait to introduce them when the time is right. Billy talks about Johnny and Katie visiting tonight since Victoria’s visiting New York tonight. Jack remembers Ash is heading there too. He wouldn’t jet off with her in the middle of a contentious divorce. Later, Billy calls and leaves Victoria a message that he’s got the kids’ bedrooms ready. He hopes she’s not in New York with Ashland.

Tara meets Lauren at the Abbott’s. Lauren says Kyle suggested she may be interested in a business opportunity. Lauren loves her shoe line. Lauren wants to meet to discuss possibilities, but Tara pooh pooh’s that idea. “Because I’m not sure if you’ve heard but I’m going through a divorce,” she says, and things are up in the air. Lauren’s been there but the offer stands. Later, she’s gone when Jack turns up with an insect chart and a magnifier. Tara’s moved. Jack thinks his early interest in science could pay off for him. His aunt Ashley is a scientist. There could be work for him in the company when he’s older. Tara brings up Lauren’s offer. Jack tells Tara to make the meeting happen. Tara lets Jack know that a woman went to New York with Ashland. Jack knows and assumes it was Victoria Newman. He knows it’s hard when someone they care about moves on. It’s good for everyone, he thinks because it could have tempered his outlook on custody. He goes and Tara looks at Abbott’s family photos. She looks as though she’s ready to cry when Kyle appears. She tells him Lauren came by and she appreciates his support. Kyle tells her she’s not in this alone. He wants her to stay in Genoa City tobe close to his son. Summer shows up as he says he can’t imagine being a part of the boy’s life.

At her place, Amanda talks to Devon about her family hiding something from her. Victor runs into Sutton downstairs. He says he’s changing counsel. His granddaughter let him down. Victor asks who he means. He calls Amanda a mystery. Later, he calls Amanda and wants to see her to discuss her real connection to Sutton Ames.

In her office, Lily texts Billy that she can’t wait to spend time with him and his kids tonight.

Ashland and Victoria are in a hotel room in New York. He looks as though he’s been crying and tells her it’s too late for a lot of things.
Billy’s kids are at the condo.
Amanda calls someone and asks to find out why her father was really killed.
Eric Forrester sees Sally, “Sally? What are you doing here?”