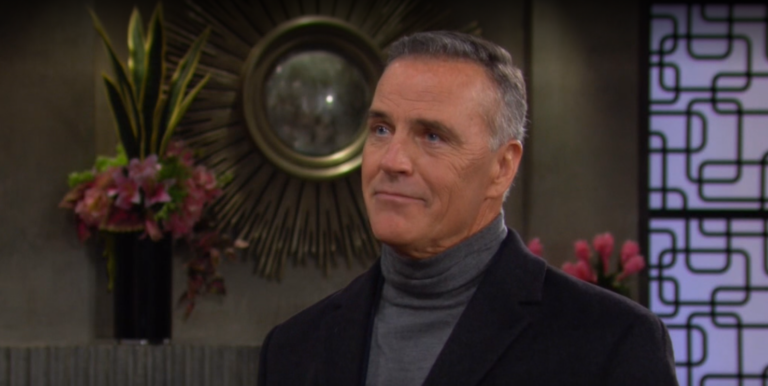 This is the Canadian “day ahead” Y&R episode from the Wednesday, March 10, 2021 episode, which airs in the USA Thursday, March 11. On today’s day ahead, full episode recap of Young and the Restless, Adam and Victor are blindsided, Sally sticks her nose into Kyle’s business, and Jack notices that Kyle is not on his A-game lately.

At the office, Billy practices his speech. Lily overhears and calls him captivating. And not just in the shower they took together earlier. He thinks she’s biased.

At the club, Victoria asks when Victor and Adam are making their pitch to Locke. Victor asks why she cares. He tells her Adam’s about to make the pitch within the hour. Victoria calls Adam their father’s second choice.  Adam seems confident and tells his sister he doubts Ashland Locke will turn them down. Victoria goes to get her meal and returns wish them luck today. Adam sarcastically tells her she’ll be the first one they call when they acquire Cyaxares Media. She smirks as she goes.

Ashland Locke and Tara meet Summer and Ashland looks at Kyle. Have they met? Summer intervenes and Ashland looks for someone to take their things to their room. She tells him she’ll find someone. Her mother owns the hotel. She asks if they’re staying a while and Tara says she hopes not. They want to get home to their son. Ashland recalls that his grandfather was a man of integrity. They part ways and while Kyle can’t stop thinking of Ashland, Tara’s on Summer’s mind

At Jack’s, Sally says she asked Mrs. Martinez for Asprin because she’s still in pain from ice skating. They talk about playing in the snow together and both say that they weren’t expecting ‘this’. Sally leaves and throws a snowball at Jack, which hits the door.

Jack interrupts Kyle and Summer. Their sales projections look good. But he’s included the East Asia section twice. Kyle apologizes. There are also errors in the marketing budget. Jack asks what’s distracting him. Summer covers. Jack tells them about his father’s dealings with Ashland and how he didn’t try to crush him when he could have. Jack goes to take a call and Kyle goes for a walk to be alone.

In the hotel lobby, Sally overhears Tara making an appointment at the spa and introduces herself. Sally’s a fan of her brand. “Your designs really inspire me,” she says, telling Tara she’s a designer. She brings up Kyle, thinking they have a friend in common. Tara lies and says she only met him today. Sally says it’s her mistake. She invites her for a drink. Tara could use a latte.

Ashland meets Lily and Billy in their suite. They pitch him. He tells them he can see they put a lot of work into this. He asks if Billy’s still gambling. “I’ve had my issues,” he says and assumes Ashland’s a gambler. You’d have to be to risk it all to start up a new company. Billy trashes the other competitors, thinking their pitch is the only one that matters. They head downstairs and see Victor and Adam, which Billy calls “the B team.” Billy alludes to another Newman parading through Ashland’s room. They don’t get the tip and they leave. Lily and Billy don’t think they know about Victoria. They go get a drink from the woman in the green dress.

At the coffee house, Tara talks about how she designs shoes for the woman, not the outfit. Sally asks why she’s there and learns she’s getting away with her husband since he’s on business. She asks if Sally’s married. Sally would like to one day. But she doesn’t think she’d want to be on business trips with him. Ashland likes her close. Sally would like to meet him but Tara doesn’t see that happening unless she has a multi-million dollar business. Kyle walks in and sees Tara with Sally. Sally sees Kyle and goes to get a refill. Kyle asks what the hell she’s doing. Sally says they have a lot in common. “Like shoes and, well, mostly just shoes.” Sally tells him to back off from her and Kyle and she’ll stay quiet. She goes and Kyle approaches Tara. She doesn’t like that he’s there. She wants him to forget Harrison. Kyle has concerns about Ashland. Tara says he’s kind until you do something he doesn’t like. He treats her well and is a wonderful father but she wants Kyle to stay away.

Back in Ashland’s room, Adam and Victor pitch and Ashland brings up the expose about him. Adam says it’s all true. Victor says Adam’s past is inconsequential. He’ll be advising his son. Adam says between the three of them, “We can’t lose.” Ashland says he has one more pitch to make. Ashland’s surprised since it’s Victoria. Victor and Adam are shocked.

Sally finds Jack with Summer at work. She wants to go shopping to buy him more clothing.

Back at the club, Billy tells Victoria Ashland’s suite number. She thanks him and thinks he should withdraw. He thinks she should step aside. Billy thinks this is about revenge. She says it is partially, but it’s a good deal. She also wants to protect him. Victor and Adam appear. They taunt each other. Upstairs, Ashland calls Tara. He has one more meeting and they can head home. She’s glad. He goes to let Victoria into his suite and he calls her the prettiest Newman. She calls her brother Nicholas that and Ashland notices she’s alone. She doesn’t need anyone backing her. She tells him she likes to win.