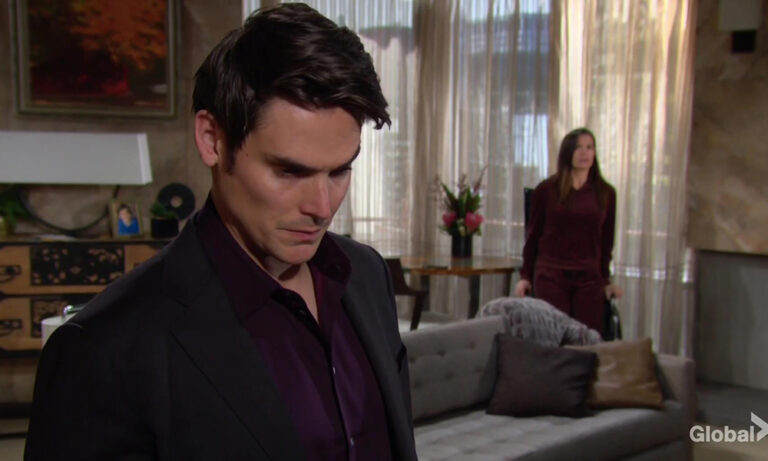 This is the Canadian “day ahead” Y&R episode from the Tuesday, March 9, 2021 episode, which airs in the USA Wednesday, March 10. On today’s day ahead, full episode recap of Young and the Restless, Billy learns that Victoria’s going up against him in the acquisition, Nikki calls Victoria out on her feelings for her ex, and Sharon is concerned about her daughter.

Victoria thinks about calling Billy when Nikki finds her. Vic says Locke will be in Genoa City today and she plans on persuading him to let her buy Cyaxeres. Nikki’s not exactly on board, especially since she said no when her father asked her to in the first place. Victoria wants to run her pitch by her mother but Nikki refuses until she admits why she’s doing this. Vikki’s trying to ensure there’s not an all-out war in the family. Nikki understands but also knows Billy’s not the type of man who wants protection. Nikki thinks her daughter loves Billy and wants him back. Victoria denies she’s pining for Billy. Nikki finally agrees to let Victoria practice her pitch on her. Once it’s done, Nikki knows her kid is ready.

In their suite, Lily tries to find something to wear while Billy lounges on the sofa, shirtless, going over the pitch. He talks her into sex in the shower. Jack arrives. He wants to hear their final pitch. There’s a lot riding on this! Billy gets a text. The stakes went up. He now knows who the third bidder is. He leaves a message for Victoria, asking why she’s trying to acquire Cyaxeres. Lily thinks this means they need to change their strategy. They do a practice pitch to Jack. He has faith in them.

Chelsea practices standing up at home and when Adam comes down the stairs, she has a look of panic that crosses her face.

At home, Sharon notices that another item Adam gave her is still gone. “Again?” she asks, then calls Adam to meet. Meanwhile, while Adam is answering the call, Chelsea is able to sit back down in her chair. Adam doesn’t tell Chelsea that Sharon was on the call. He leaves and once out the door, Chelsea texts Chloe that he’s gone. Chloe arrives later and sends the nurse out for a break. Chelsea shows Chloe she can stand. She’s getting stronger daily. Chelsea and Chloe laugh excitedly as Chels takes a step. Chloe finds a bag under some pillows on the sofa and agrees to keep it for a few days, though she’s confused about what it is. Chelsea’s not ready to say what it is. “It involves some payback for Adam,” and ensures that he can’t follow her when she leaves. Chloe will help but worries her BFF is playing with fire. She knows. The fire is what gets her moving.

Nick and Faith show up at Society. Lola says she fired the busboy who took that photo. Faith thanks her but looks around, worriedly. Nick goes to take a call and Lola promises it won’t happen again. She advises that bullies usually quit after the veil is removed. The girl who put the vodka in her locker confessed and was suspended. Faith is glad but still doesn’t look happy. “It’s not going to be easy,” she says, knowing people will be staring. Nick says it’ll die down. He suggests going back to boarding school, though nobody wants that. “Especially Christian.” She doesn’t want to run away and let the bullies win.

At Crimson Lights, Sharon asks Adam if he broke into her house and “steal some things.” Adam gives her the, “What are you smokin'” look. He hasn’t been accused of that in a while. She tells him a few gifts he gave her have gone missing. He has no idea what she means so she tells him about the figurine and the tray from Lake Tahoe. Adam says he’d never violate her privacy like that. “Maybe it was Rey.” She says he doesn’t know they’re related to him. He asks why she kept them. She shrugs them off, calling them nicknacks. She asks how Chelsea is. He reveals there’s no progress. Sharon’s sorry. Adam tells her about him and his father working on their issues and potentially buying a new company together that he’d run. She’s surprised. Victor appears in the doorway and he calls Victor his only ally. He goes to his father and Victor asks what’s going on with Sharon. Adam brushes it off. His mind is only on Cyaxeres Media. They know that Ashton likes to play power games by using people against each other like pawns. Victor recalls that he did it in Dubai once. Victor asks Adam to do a practice run. Afterward, Victor knows he’s ready.

At home, Sharon and Nick talk to Faith about going back to school now that the girl who put the booze in her locker is gone. Nick tells Faith to go do her homework. She groans and takes off. Sharon asks Nick if he thinks it’s possible that Faith has Bipolar Disorder like her. Nick reminds her that almost all kids experiment with alcohol. Sharon admits there’s been a few things missing from around the house. Faith denied taking anything but Sharon is worried. “That’s exactly what I did when my bipolar started to manifest,” she says, concerned. Meanwhile, as they talk, Faith sits at the top of the stairs, looking shocked. She gets another text, “I think you’re brave. Like a warrior.” She asks who the texter is and they send an emoji of a guy. She asks to meet, then tells the person her parents don’t trust her and she has no friends. They send a heart emoji back. Downstairs, Nick is encouraging about her therapy with Rey and asks why Sharon thinks Faith would steal the nicknacks. “I don’t know,” she says. He hopes she’s more honest with her therapist than she was with him.

Adam, Lily and Victoria all receive calls that Ashland is there. “Let the games begin,” Victor says.

Take a look at yesterday’s day ahead Y&R recap when Kyle and Summer were sickened by Jack kissing Sally, and then join in the conversation with a comment or two and feel free to like and follow Soaps Spoilers on Facebook and Twitter.