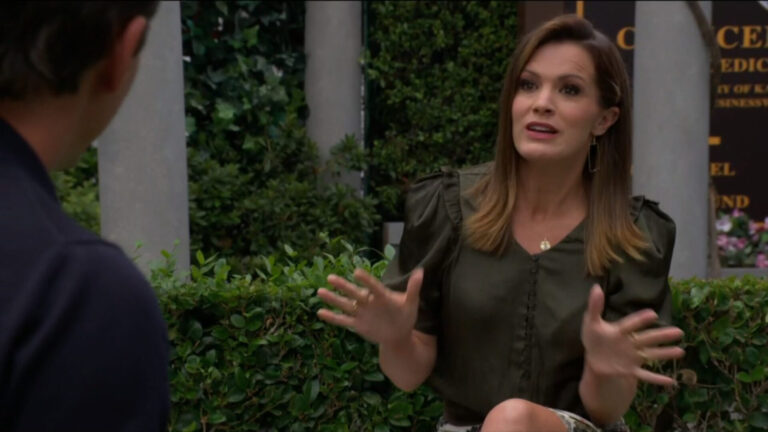 In this episode of CBS’ The Young and the Restless, Faith packs up to leave Genoa City, Tessa and Mariah consider their options for adopting, and Adam and Victor argue about his new job. In the previous episode, Adam asked Sally to reunite, and Phyllis lies to Jack, while Kyle had a secret.

Imani finds Nate at work and tells him that Amanda and she decided one of them would keep the legal wheels turning while the other stayed with their mama, who is still in a coma. Imani’s worn out.

In the park, Chelsea flashes to kissing Billy and him turning her down. He turns up and she acts awkward toward him.

He asks her not to. They’re better friends than that.

She asks if he’s had a talk with Victoria about having the conversation with Johnny about her being his biological mother.

He hasn’t because Vicky’s out of town.

He’ll try to get the kids together to hang out as cousins for now. She’s happy about that. He asks her to reconsider doing the podcast but she’d like to put it behind her.

Billy talks about how much people loved her in the podcast. He asks her to think about it. She’s not sure.

She admits she’s felt adrift. Other than focusing on being a good mom, she’s not sure where she’s headed.

He brings up Adam but she doesn’t want to go there. They go back to him and he talks about enjoying a challenge.

He feels most alive when he fills upstream. She thinks he’s most alive doing their podcast.

At Crimson Lights, Tessa and Mariah complain about being told their arrest records are causing havoc on them getting cleaned to adopt. It’s hard to face the reality but they’ll deal.

They consider they’ll find someone who can help them with this, help figure out what type of adoption they want. They discuss foster care as a possibility and Tessa suggests they change their approach.

They should go to Christine. She helped Sharon get custody of Cassie back in the day. They couldn’t ask for a better advocate.

They decide to talk to her.

Inside, Sharon and Nick talk about how proud they are of Faith going off to university.

Sharon’s going to find it strange being alone. Nick thinks Christian will visit as much as she wants.

Nick tells her that Adam gave him advice about killing Locke which means he has a deeper understanding of his brother now more than ever.

Sharon hopes his perspective was beneficial. She suggests therapy and he pooh-poohs that idea. She pressures him lightly.

Faith shows up. Moses and his mother are already on campus. Sharon learns she has one more thing to do on her list. Everything is in the car. The bad news is, the car is overly packed. Nick’s not worried.

Ann Arbor is not far. Sharon starts to tear up. Faith reminds them she’s not going to be far away. They’re emotional.

Adam paces at the ranch until Victor appears.

Adam tells his dad he took a job as co-CEO with Jack at Jabot. He asks if his son’s trying to get a rise out of him.

Adam just wanted his dad to know first, from him.

Vic asks if he’s retaliating against him. Adam says no, he’s done lashing out. He’s doing this for him so he can move on.

He offers that Jack only had the best intentions when he offered the position.

Victor laughs at that. He is reminded that Jack waged war against him for years and never won. It’s a mistake.

Adam asks why. Vic says he’ll be an outsider.

Adam’s treated that way at his own family’s company. He’ll take his chances with Jabot.

Adam doesn’t want to argue. Neither does Victor, but they do anyway.

Victor doesn’t think he treats any of his kids differently from him and asks why it’s always all or nothing with Adam.

Adam says he’s cut from a different cloth. It’s time his dad gets used to it.

They argue some more. Adam thinks it’s time to follow in his mom’s footsteps of not falling into the Newman footprints. It’s why she raised him as a Wilson.

Adam now gets why she waited to tell him on her deathbed. Victor yells and Adam wants him to be happy about his new adventure but can see that’s not going to happen.

“Then you follow your new venture,” Victor shouts. Adam takes off.

Elena arrives at work and Lily tells her that her job as Ask MD is going swimmingly. She’s doing a great job and the numbers don’t lie.

She asks about Nate and Elena admits Nate doesn’t think Devon respects him or likes what he brings to the table. Lily hasn’t seen that. She calls Nate impatient and wants to go after it.

Devon’s cautious and analytical. It’s a balancing act. Elena imagines how hard this has been on Lily. Lily shakes her head.

She can handle it but wants them to find harmony.

Off the record as friends, Elena says she told him to quit. Lily’s surprised. Elena lets Lily know that he declined to do that. Lily’s glad. She believes in him.

Elena goes and Billy arrives and tells Lily he ran into Chelsea. She makes a face. He ensures she knows that Chelsea knows the kiss was a mistake. Billy’s right where he wants to be. They hug.

Talk turns to Devon and Nate tells her about the music festival idea he had and that Lily was into it.

Imani’s proud of him. Nate thanks her but Devon says he may consider it in a year. Nate’s frustrated that it keeps happening. Imani’s sorry. He admits he’s tired of biting his tongue.

Elena thinks he should quit but Imani doesn’t think he’d do that. What would he do?

Nate says technically he’s still a physician. She asks if it’d satisfy him and it wouldn’t.

Elena’s just worried about his happiness. Imani’s happy to hear and thinks he’s where he needs to be.

Back at Crimson Lights, Tessa and Mariah rush to Faith to say goodbye. They give her a gift that she can’t open until she leaves. Just so they don’t bawl. They hug and say I love yous.

They vow to call, text and video chat. Tessa thinks she’ll have to change her number, she’ll be so sick of them. “Not possible,” she says. They head out.

Adam finds Chelsea in the park and asks how she is doing.

She tells him she’s doing great. He’s good. He was thinking of her. She wants to go see her mom in Minnesota and wants to take Connor with her.

Wednesday’s Y&R recap: Chelsea loses it and gets drunk