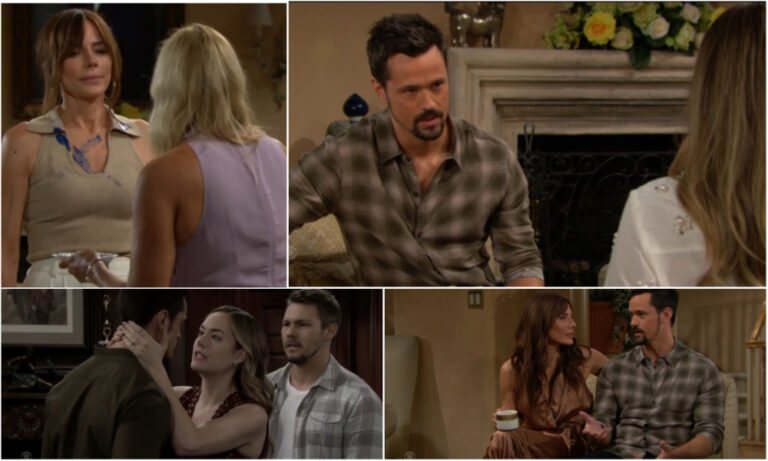 What could have been a storyline filled with drama, has only caused fanbases to argue endlessly.

After two weeks of the stale Douglas custody story, things took a sharp turn at the end of Friday’s episode when Thomas told Hope that she is still the only woman for him.

HUH?! Were you as surprised as I was?

As sickened as I am by Thomas’s past abusive treatment of his son being glossed over (more on that later), his declaration of love for Hope has the potential for being one of those “this changes everything!” moments.

Is Thomas using Douglas to get close to Hope?

I suspected Thomas was up to something when he started using his breathy baby doll voice to talk to Hope. That’s the sound of Thomas manipulating someone.

Whether Thomas is telling the truth this time about still wanting Hope or he’s just exploiting her to get to Douglas, it’s a welcome twist in this otherwise creaky story.

After all, it would not be the first time that Thomas played Hope like a fiddle to get what he wants. The fact that Hope can even stand to be in the same room with the man that kept her daughter from her is baffling to me.

Despite their tangled history, Hope is giving Thomas the benefit of the doubt and trusting he’s sincere in only wanting to spend more time with their son Douglas. Hope isn’t bad-mouthing Thomas and she seems to genuinely want to work things out.

In fact, I think Hope is handling Thomas better than most mothers in this situation would. Will she end up regretting being so understanding? Yes, I think she will.

Is Thomas is telling the truth about his feelings, even when we know he wants to keep Douglas full-time? I’m not entirely sure. What do you think?

Blood is not what makes a family

Taylor’s dialogue this week about the superiority of Thomas’s blood relation to Douglas is making me crawl the walls. It’s insulting to viewers who are adopted or adoptive parents.

This attitude is completely wrong for the show, especially when there are so many B&B characters who’ve gone through paternity mishaps and have blended families. Taylor’s “real family” obsession is odd and out of character.

Honestly, her fixation on Douglas being a Forrester with a birthright – without any acknowledgment as to why – is making her the villain right now and I don’t think the writers actually want us to feel this way.

Steffy has something to say, as usual

To make the forced custody drama even more ridiculous, now Steffy has chimed in with her thought that Thomas shouldn’t have to schedule his time with Douglas and should just be able to take him when he wants.

In what kind of custody agreement would one parent allow the child to be taken unannounced and for an unspecified amount of time? I doubt that Steffy would agree to that with her own kids!

Scheduling is what split millions of parents (and B&B viewers) do and that’s where the drama should be coming from, not from a backwards, old-fashioned and wrong-headed idea that blood relation is what makes a family.

There are people all over this country that “co-parent” children every day. “I get Christmas, you get Thanksgiving.” They do teacher’s conferences and soccer games together. They even come together for birthdays and graduations. How is this hard?

This should have been Thomas’ redemption story

This custody battle story could have been a great redemption arc for Thomas to prove he’s changed and that he’s a good person.

It should have started months ago with Thomas getting therapy and showing (not telling) that he’s changed.

Thomas’s reform could have been a groundbreaking story for soap operas.

Thomas and Hope could come to an uneasy agreement to share time with Douglas and the drama from the story came from them trying to make that work while their parents stick their noses in with their own drama.

Thomas having to work at being a good dad would make me care, not this entitled “Forrester birthright” nonsense.

Okay. Now, let’s talk about the elephant in the room…

Thomas Forrester was – and may still be – a child abuser

I don’t say that casually or to provoke. Thomas threatened, intimidated and intentionally frightened Douglas in some pretty harrowing scenes. We saw it with our own eyes and no amount of re-writing will change that.

Don’t get me wrong, Thomas when he’s bad and unpredictable makes for some good story. Smoothing down his rough edges to make him a sweet single dad would be unrealistic and lead nowhere interesting in terms of story.

But B&B has long established that Thomas is not just unpredictable.

He’s also been violent, emotionally manipulative and intimidating to Douglas and that should be plainly acknowledged in the dialogue.

You can whitewash all you want, #BoldandBeautiful but I’m not forgetting this. You can make NuDouglas say he’s having SO MUCH FUN a billion times, it’s not gonna erase this from my head. pic.twitter.com/uiSLdf6Yt1

I’m not saying that an abusive father like Thomas is a hopeless case. Far from it.

I would love to see Thomas really make the changes he needs to find happiness. That’s classic soap opera!

But real change comes from years of therapy, not a couple of video calls with your mom. Abusers don’t just decide not to abuse.

I guess that Taylor is supposed to be coming off as a well-meaning mom/psychiatrist when she talks about Thomas “making strides” and being a good man. But to me, she seems like an enabler.

Her empty words remind me of the adults in my own abusive childhood who knew what was going on but thought that if we all just pretended like nothing was wrong and smiled a lot, everything would work out.

Ignoring abuse or the signs of abuse never works out. It just allows for more abuse. Taylor of all people should know that.

You might remember that Taylor is a victim of abuse herself. Her ex-husband Blake Hayes mistreated her and later stalked her.

So why is Taylor now so nonchalant about her own son having been an abuser? It makes no sense and makes Taylor seem stupid, at best. What do you think?

Let’s fix this story before Taylor is ruined

If the writing is not going to address the world-renowned psychiatrist’s blindspot when it comes to Thomas, Taylor is just going to come off as an incompetent quack when she should be the smartest person in the room.

Taylor should be thinking about what Thomas did in the past and whether or not he’s truly changed – or if this is just another game he’s playing to get to Hope.

Just as Taylor is starting to think Thomas has mended his ways, she catches him in a tense moment with Douglas and realizes the cycle of abuse is starting again.

Dramatic and entertaining can also be educational. That’s when I think soaps are at their finest.

In real life, for every case of child abuse reported, two are not.

If you or someone you know is the victim of abuse, help is available –  thehotline.org and childhelp.org can connect you to services across the country. Remember, you’re not alone.

What do you think? Is Thomas a child abuser or just very misunderstood? Should Taylor lose her medical license? Leave a comment and feel free to read more of my opinions on B&B on SoapsSpoilers, which includes some fun alternative storytelling ideas!