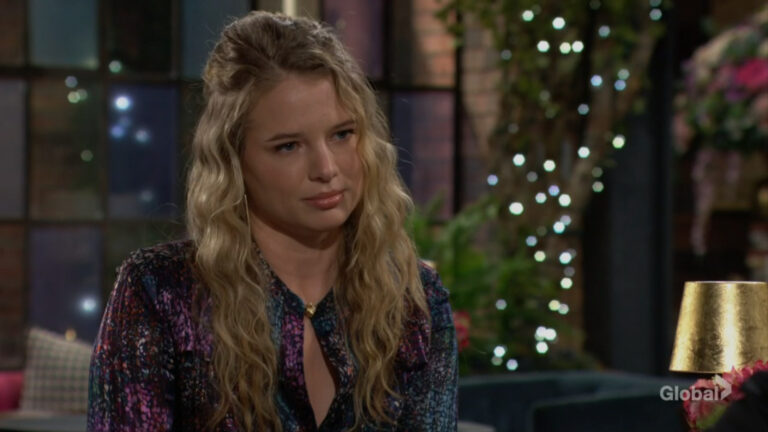 The week on Y&R landed just as May Sweeps ended, which was an odd choice, considering Sweeps wasn’t memorable and this week was more memorable than probably the entire year. The theme of the week? Insecurities. Faced with an old foe, Phyllis tried and found it impossible to rein in her petty side. Elena of Perpetual Slumber, spent the week asleep and jealous, and Victor worried too much about what his arch nemesis was up to as usual.

For those who saw last week’s spoiler promo, were you taken in by how it was edited together to make us think there was real drama? How about the spoilers where they make us think something big is happening but when you watch the episode, the spoiler you’ve tuned in to see doesn’t happen or happens on a much smaller scale?

Imani’s not giving up on Nate! 😱 #YR is new this week on @CBS. Watch the latest episodes on @paramountplus. pic.twitter.com/WhoiUocHYX

Last week I talked about Elena’s insecurities over Imani. This week Elena of Perpetual Slumber spent the week exactly the same as she always does. Working long hours that we’re not privy to because there’s no longer a hospital set.

She was tired and lost patience with Imani who wants to bed Nate in the worst way. This is basically all we’re going to get from this story until either Nate cheats I figure. Oddly, Nate’s handsome, he’s got a good job, his own condo and everything looks good on paper, but he’s still written as dull.

In a strange yet boring twist, we watched Elena have a nightmare about Imani asking Nate to have a shower with her because that’s where she gets all of her work ideas.

What I wanted to see? Elena dreaming that she walked in on Nate and Imani naked in the shower. That’s what we would have been treated to on Y&R when they weren’t afraid of drama. I’d have shown her fury and escalated her insecurity, which could have pushed this storyline into action faster.

A few viewers thought it’d have made an even better scene to see Elena making out naked in the shower with Imani. Now that’d make mouths wag!

I love Victor. I do, but he manipulated Kyle and Summer into doing his bidding, while using their son as a pawn in a move that was calculating and probably unnecessary. And. They. Fell. For. It.

He’s so focused on Victoria’s life that he’ll do just about anything to get Locke out of it. Out of Genoa City but instead of getting the man sent away for fraud, he had a restraining order drawn up. For a town that has about 100 people if that, it’d be impossible for Locke not to run into his kid. It was effective, but since we all know because of the spoilers at the end of Friday’s episode that Locke and Victoria will reunite next week, how will he bypass it?

Who do we think texted him that Harrison was in the park with his nanny? I’m assuming Diane considering she has no life and nobody else gives a shit about Locke to do his scouting for him.

If Locke and Jenkins don’t kidnap the kid then I don’t know what kind of show it is we’re watching anymore but it’s not a soap. With no payoff, it’s just a series of teases. Like Lucy taking the football away from Charlie Brown when he tries to kick it in the Peanuts comics.

The spoiler for Friday was “Noah makes advances on Allie, which she hilariously rebuffs.” I didn’t see that and I didn’t see anything that I’d call ‘hilarious’ in Friday’s episode.

Allie and Noah did have a spark when they both actually smiled for a change but their conversation at Crimson Lights about Billy’s Manpain Monologues was almost as boring as the podcast itself.

I found my thoughts drifting as they talked about following their bliss vs making a pros and cons list. They’re opposites and the show wants to do an opposites attract story but unless she hates on him for a while and she calls him out for being elitist often and argues with him about it, and then they have hate sex, I’m not here for it.

Diane’s ruling over Jack and Phyllis’ lives without barely lifting a finger and I’m here for it. Having her around has kicked this show up a few notches

Last week in my Y&R column I wondered if my Phyllis was using Jack. This week we learned that though she does have feelings for him, she relapsed into her bad habits, her crazy insecurity and went off the rails trying to ensure that Diane knew she and Jack bumped uglies.

It hurt Jack in the process and by next week (spoiler!), he’ll dump her and we can all guess that it’ll mean he sights will move on to Diane. Not only is the show predictable but they do love their musical couples.

Best scenes of the week: Jack heard Phyllis tell Diane she was marking her territory by sleeping with him so she could rub it in Diane’s face. The scenes were bloody hysterical from Phyllis and Jack getting off the elevator to Phyllis doing that little dance.

Michelle Stafford is the best at acting petty. Diane plays off her so well and easily manipulates her. Best thing the show has done in a while was to bring Diane back. Not only was this ridiculous but it showcased a side of Phyllis that we hadn’t seen in a while. We were reminded how far she’s come.

Here we go, rehashing this old relationship for the umpteenth time. I used to love me some Shick back in the day but we’ve moved on from that. All these two have shared since is that they have grown kids and they bonded over shared trauma when Cassie died 17 years ago.

I know some viewers eat up the nostalgia of the Cassie scenes and that’s cool. I don’t judge. But for me, they just don’t take up space in my head. I find the scenes over the top and repetitive which translates as boring at this point.

I don’t mind a mention once in a while but the continuous keeping alive a dead character when there’s so much more they could be doing tells me they’ve nothing new to write and only want viewers to watch out of nostalgia or habit.

The only TV shows that get away with this are soap operas. No self-respecting primetime show would keep badgering us with that. Even Grey’s Anatomy which has been around about 18 seasons doesn’t remind us yearly of George’s death for example. I digress…

It’s obvious that the show is going to put Sharon back with Nick but what else do they have besides nostalgia? What’s changed that will keep him from cheating on her again? Are they older and wiser? I don’t think so. If they’re together, I’d really love if their story was completely different, exciting and fun this time around. Playful. Especially after she barely had love scenes with Rey and poor Nick hasn’t had sex since he and Red split.  Dude must be chomping at the bit.

And honestly, if they’re going to trot out the old nostalgia, why didn’t we get a scene at Cassie’s grave? Why even bother mentioning her if we don’t get to actually see them there. That’s where the real drama is. Where the couple sobs together over their loss. Again.

That’s all I’ve got for the week. Please feel free to leave me a comment whether you agree or disagree with what’s written. Remember, it’s opinion and all in fun.