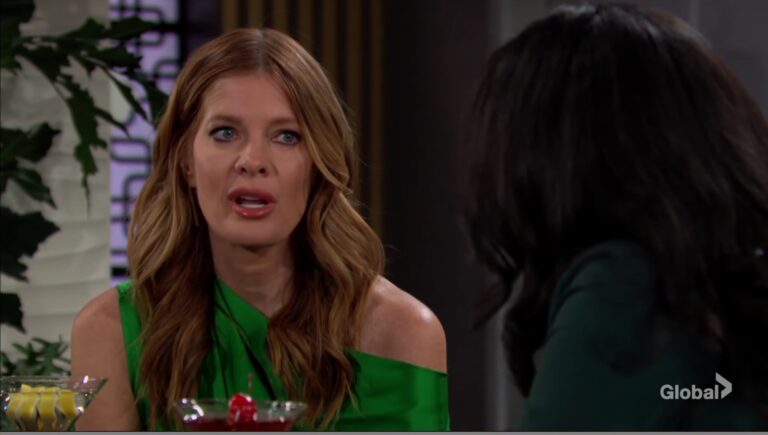 Canadian Y&R day ahead recap for Monday, January 17, 2021 episode, which airs in the USA Tuesday, January 18. (Recaps live by 5:45 PM EST daily.) In the previous episode, Sally asked Adam to New York with her. In this episode of CBS’ The Young and the Restless, Chance makes a big admission to Abby, Nikki doesn’t like that Ashland’s making inroads into the CEO position, while Phyllis gets an offer from Marchetti.

Rey and Sharon return from an art gallery showing. They see Nick and tell him about their date. He tells them to ignore him. He’s waiting for Noah.

Noah appears and Sharon again asks why they’re meeting. Noah calls her nosy and asks to talk to his dad in private. Rey and Sharon leave them alone and Noah agrees to work with Nick.

He refuses to let his work consume him the way it does Victoria and his grandfather. Nick says that’s not a problem. Sharon appears and watches from the door.

She’s happy that they’re bonding and is happy Noah is sticking around. She goes to Noah to congratulate him and Rey watches as she places a hand on Nick’s shoulder.

When Tessa arrives, Nick and Sharon leave them alone. Tessa tells Noah she has a surprise for him. She shows him the album and asks him to come to the launch party.

He grins at her like she’s a McDonald’s Happy Meal and Sharon intervenes to ask if she can get them something. He tells her they’re good and she stares at him, awkward smile in place. Tessa seems oblivious.

At Grand Phoenix, Phyllis talks to Summer about her big meeting. She asks after Jack doing a collaboration with Kyle in Milan. She fishes for information, but Summer can’t talk since she’s busy at work so Phyllis disconnects.

Richard Burgi out due to COVID violation at Y&R

Nikki finds Ashland alone in Victoria’s office. She’d like to meet with him and Victoria. He tells her she’s not around right now and when she inquires as to what he’s doing, he tells her he knows an executive in New York that he wants to hire.

Nikki lets him know that the position he’s looking to hire for is taken by Regina. He thinks it’s time to let Regina go. Nikki asks if Victoria knows about this.

He says she doesn’t need to know about this. He’s handling all of the pesky details. Nikki’s brow furrows in concern.

She wonders if he’s jumping the gun. He asks if she wonders if he’s trying to make his mark by hiring new people. Victoria strolls in and Ashland explains what they were talking about. Nikki looks dour as Victoria thinks it’s a good idea. He goes and Nikki purses her lips.

Victoria claims she and her husband are working out how they communicate at work. When he takes the lead, it doesn’t mean he’s not considering her feelings.

Nikki asks if she’s comfortable with it. Victoria knows where she stands and so does her husband.

She’s the only CEO and it’s not a shared position. Later, Victoria and Ashland discuss his friend from New York. She can’t make it work since he’s asking for a bigger package than she’s willing to offer.

Ashland’s fine with that. He’s glad that her mother didn’t sour her on the discussion. They banter, happy that they’re able to make these decisions together.

At Devon’s, Devon and Amanda discuss the shared custody case. She thinks if he’s going to proceed, he’ll have to find a way to make peace with his decision. Devon has a hand to his head as he tells her that no matter what he said, Abby didn’t understand where he was coming from.

Amanda thinks she’ll recover from the shock. Devon mopes. He’s losing his best friend so he can be a father to “my son.”

At the manse, Abby leaves a message for Christine to call. Chance says the baby’s tucked in. She yells that they’re supposed to be bonding with their son and suddenly it feels as though everything could fall apart. She didn’t think Devon would take things this far and blames Amanda for pushing him to do this.

Chance asks her not to blame her. It’s not Amanda’s fault. Abby notices that he’s not as upset about this as she is. He’s looking at it from all sides. He doesn’t think there’s an easy answer here. “There’s only one answer and it’s no,” Abby gripes.

She tells her husband that Devon sees himself as a father to their son. Chance is surprised but not upset. They’ll fight this if he proceeds but he’s worried a judge will have the final say, not them. Abby has confidence that they’ll win. Devon sighed away his parental rights. Chance defends Devon. It was done before the baby was born. Abby knows that they bonded but it’s a crucial time for their family. “He’ll probably use that in court,” Chance says. “The fact that I haven’t bonded with our son.”

Abby admits that is what he said, but he’s wrong. Chance looks at the baby monitor and Abby shares the rest of the conversation, that Devon thinks Dom deserves a parent who is more present. “He’s wrong-headed,” she tells Chance. Chance thinks Devon is right.

Abby keeps at him and he admits he lied to her. This has been confusing and frustrating for him. He wants it to work but he can’t make it work. He starts to cry. He can’t bond with Dominic. He lets her know he has no photos of him on his phone. “I bet Devon has a hundred.” Chance loves the boy but it’s not enough. He can’t build that kind of connection that Devon has with him. He’s not sure it’s right to stand in Devon’s way.

Nick sees Phyllis drinking wine alone at Society. She asks if he has time to talk. He tells her about his birthday in Milan and his birthday party at Crimson Lights. It’s awkward when she learns Sharon threw it for him. They discuss how tall Christian is getting.

He asks when she’s coming to play video games with him. Phyllis is stunned. She didn’t think he’d notice that she was gone. She looks sad and asks if they’re okay. He assures her they’re good. His food is ready so he takes off. She calls Amanda to get a drink with her. Amanda tries to get out of it but Devon pushes her to go.

On Amanda’s way out, she runs into Mariah. He tells her about taking Abby and Chance to court. Mariah’s shocked and urges him not to. He’s shocked that she doesn’t see his side.

As Tessa and Noah continue to look at her album cover, Nick returns to Crimson Lights and he and Rey notice Sharon has a strange look on her face when she returns from seeing Noah. She covers. Outside, Noah asks if he and Mariah have considered marriage. Are they ready? Tessa thinks so.

She thinks starting their baby adventure could begin with a wedding. Mariah arrives. She admits she had a difficult conversation and asks to talk to Tessa in private. Noah watches Tessa like a hawk while the women talk. Sharon catches him and asks if he’s okay. He tells his mom he’s fine.

Amanda meets Phyllis at Crimson Lights. She’s in a mood for a drink. They discuss a girls’ weekend. She likes skiing but Phyllis cringes. “You can do that with someone else.” They laugh and she admits she feels she’s going to spin out of control. She spent all her time with Nick and Summer and Jack’s out of the country still.

Amanda reminds her she has Lauren and her. Phyllis is happy to hear and she values them but she needs to figure out how to fill her time. She’s not the yoga type. Her types of hobbies include computer hacking and that’s no good.

“Something has to change for me for the better,” she says. “Or else I’ll spin out and I’ll start creating a lot of chaos.” Amanda leaves and Phyllis gets a call from Summer. Marchetti has an offer for her.

Back at home, Amanda finds Devon and he shares that Mariah made some good points with him about the case. They embrace and kiss. She doesn’t think he can go wrong if he follows his heart.

Y&R recap for tomorrow: Chance confesses to Abby and Devon he can’t give attention to Dom, while Adam’s surprised Chelsea wants to move the fashion office.