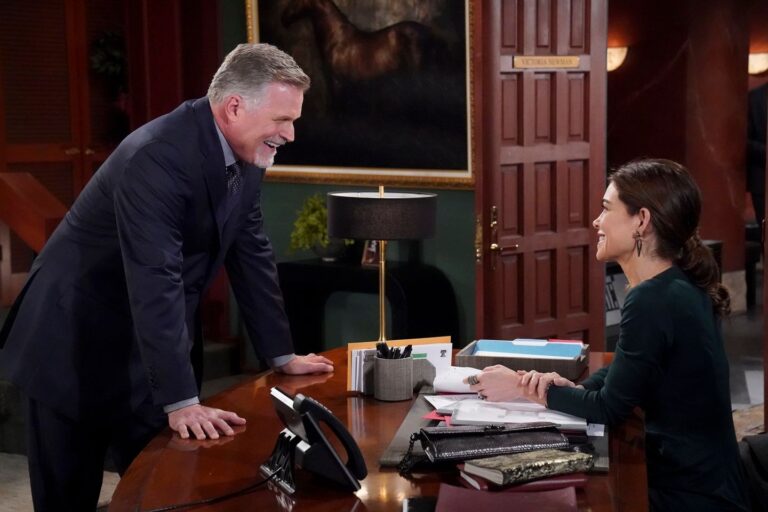 Originally reported January 11 and updated January 12: As SoapsSpoilers reported January 8, Richard Burgi, who has been portraying Ashland Locke for the last year took to Instagram to alert his followers that he is exiting Young and the Restless.

This was not the actor’s choice according to his wife, who posted a reply to a fan on Instagram who asked if it was his decision, said, “Nope! Their choice! It’s the Writers.” Read more about Burgi’s exit, which was due to a COVID-19 policy violation.

According to Soap Opera Digest, though Burgi will exit, the character of Ashland Locke will resume. Young and the Restless has hired Guiding Light vet Robert Newman (Joshua Lewis) to portray Locke. Newman will begin airing in February. He’s no stranger to portraying a wealthy character since Joshua Lewis was the son of an oil barren.

The actor created a post on his personal Facebook page that reads, “Thanks to everyone for the sweet posts and messages about my joining the cast of Y&R. I couldn’t be more pleased. I’ve had great respect for the show and it’s (sic) wonderful cast for many, many years. I’m happy to be a part of it. I had a lovely zoom meeting with Josh Griffith and Anthony Morina last night. We talked quite a bit about the character, and I’m very excited by the scripts I’m getting so far. I’m scared to death, of course, but I think that’s healthy.

It’ll be a new adventure and I’m feeling pretty blessed to have the opportunity. Cheers!”

He returned to Facebook on February 2 and said, “Many of you have asked when I will begin to air as Ashland Locke on Y&R. I promised the PR department that I would not jump their announcement, which they made earlier today. So…Next Wednesday, February 9th, is the day. Below is a set photo with the wonderful Amelia Heinle. Be gentle…”

A little about his past for those who weren’t watching, Ashland Locke was supposed to have been a “powerful and ruthless” businessman, the husband of Tara Locke, who has since left Genoa City after she was arrested for fraud.

Ashland was born Robert (Bobby) DeFranco, the abused son of an alcoholic. Bobby and Ashland Locke were best friends who had gotten matching tattoos. The men were in a horrible car accident which left Ashland trapped in the car. The man had burned alive, while Bobby was thrown from the car and did nothing to save his friend. Since the two had matching tattoos, it was assumed that Bobby had died in the car accident.

Bobby went on to take on Ashland Locke’s identity after his friend’s passing and ended up working with a wealthy and older woman, Camilla Rhodes. Camilla taught him everything about business and when she died, he forged a codicil for her will that stated she left everything to him.

This is how he purchased his first few companies and started his fortune.