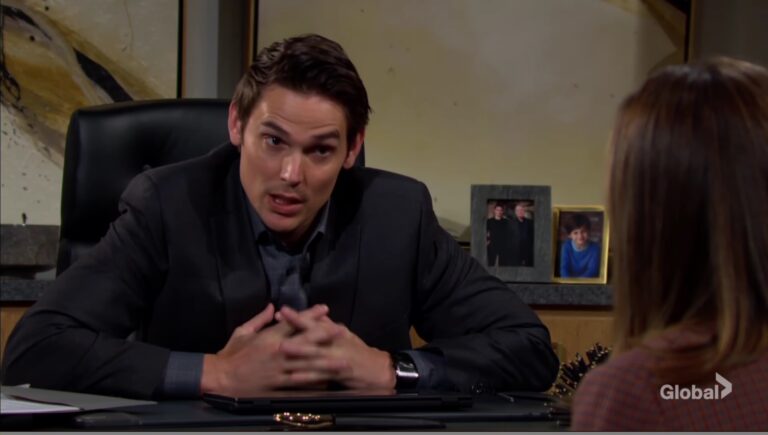 Canadian Y&R day ahead recap for Tuesday, January 18, 2021 episode, which airs in the USA Wednesday, January 19. (Recaps live by 5:45 PM EST daily.) In the previous episode, Noah accepts Nick’s offer of work. In this episode of CBS’ The Young and the Restless, Sharon gets between Adam and Billy, Chelsea tells Chloe she has to let go of Adam for them to work together, and Devon wishes Neil was there to help him.

At Devon’s penthouse, he flashes back to times when Chance felt insecure about being a husband and father and how he questioned whether he can live up to the commitments he made.

Devon wishes he could talk to his dad who would break things down to the heart of the matter and then let him figure out what to do for himself. “I’m just trying to do the right thing for my son,” he says.

At home, Abby fidgets. She’s tired. Chance asks how he can help.

She asks him to explain why he doesn’t want to fight Devon on shared custody. She thinks he has him questioning his ability to be a good father.

Healing from trauma and parenting takes time, she says. He knows but insists they don’t have that time. She brings up the document Devon signed. It breaks her heart to fight for their son and she needs to know Chance is on her side.

Chance says he is and embraces her. She’s angry that she feels Devon is using what they say as a weapon. Chance feels bad for opening up to him. Abby takes off for air.

Lily and Billy get coffee from Sharon at Crimson Lights. It’s their first day at Chancellor Industries. Sharon congratulates them. Billy talks about putting everything at ChancComm behind them.

Adam arrives and Lily wants to leave but Billy wonders what kind of message that would send. He goes to Adam to thank him for reaching out to Lily and giving her best wishes.

Adam heard that Billy’s working at Chancellor too. Billy asks where his text was. Sharon comes between them and asks Adam what she can get him.

He gets a round of coffee for the three of them and Billy and Lily thank him and go. Sharon hopes that some of Adam’s performance was sincere. He grins. He really wishes Lily the best but his relationship with Billy is convoluted.

Adam asks if Connor’s been taking too much of Faith’s time riding. Sharon denies it. Adam’s glad to have family for his son’s sake. She can see Connor is his everything and hopes that no matter what happens with Newman Media that he and Victor stay in good graces. She tells him he and Billy are similar creatures and Adam shakes his head.

Richard Burgi speaks out about being let go at Y&R

At Society, Chloe updates Chelsea on everything Sally’s doing today in New York City, which sounds like back to back interviews. Chloe ordered for them and notices that she’s in a mood. She assumes it’s Adam. “Don’t tell me I’m wrong. I’ve seen this movie.”

Chloe reminds her they’re best friends and she’d do anything for her. She asks her to do this one thing and open up. Chelsea barks that Chloe’s right. If she had have listened to her, she wouldn’t be in this mess. They’re both in a better place, and she thought they were destined.

She admits they went for drinks last night and he let her down hard and that they can’t work together if she can’t let go of the past. Chloe’s sorry. Chelsea says Adam made it clear that their bond is broken for good.

Chloe just wants her friend’s happiness and for her to let go of making excuses for his terrible behavior. She wants her to break her addiction to Adam and focus on the platform. This is the beginning of something new for her.

Lily and Billy arrive at their Chancellor Industries office. It’s the same office as ChancComm but the banner has been changed. She comments that it’s nice to be in the same office.

Billy thinks it’s more like coming back to the scene of the crime. She finds flowers from Jill and then Devon pops in with a gift for his sister and she asks him to congratulate Billy. He does and Billy heads to his own office. Lily tells him not to have reservations but Devon can’t help it.

He agrees to keep it to himself. She asks what’s going on with Dom. He admits he started the legal process to get shared custody with Amanda representing them. He admits Abby reacted poorly but Chance is hard to read. Devon gets a text to meet Chance to talk. He goes and Billy sits in on Lily’s first meeting. Afterward, he supports her and tells her how well it went. She’s beside herself with excitement and kisses him.

Abby arrives at Crimson Lights and Adam leaves. Sharon can see she’s upset and offers to listen. Abby doesn’t want to get into it. They sit and Sharon gets into it anyway.

Abby gets irritated and Sharon thinks she should reach out to those who love her. Abby thanks her, but takes off. Nearby, Nate can’t believe Elena dragged him to two stores for lamps.

They banter and talk about living together. Nate heard Jill has a new buyer for ChancComm. Elena wonders if they will let her go. Since it’s Newman/Locke, Nate jokes that he may be able to pull strings since Ashland’s a big supporter. He asks if she wants it to fold. She asks why she’d want that and he reminds her she works her arse off.

He thinks she has a lot on her plate. Too much, actually. She feels over committed but thinks he should understand. She vows she won’t neglect him. He thinks he’ll have to pamper her more when she comes home. “To our home,” he clarifies.

Chelsea arrives at Adam’s office to tell him she got the point last night. He says he didn’t want to hurt her but she thinks that’s a load of poop. She refuses to let herself subject herself to more of that and wants to know how to move forward professionally.

She learns he wants her to work there and she reveals it’d be nice not to have to run into him every five minutes. She’d like to move the fashion platform out of the building. He’s shocked and doesn’t think it’s necessary. She asks him to consider it and goes.

Noah meets Devon at the penthouse. Chance asks if he didn’t make it back or if he was in a better head space, would he still be making these demands?

They agree that it’s a bad idea to talk about this but he wants to know how to handle this without turning it into a war. They both want what’s best but Devon doesn’t understand why they feel so threatened by him.

Devon respects Chance and his time served as a vet but he asks if he’s in a place to give Dom what he wants without being affected by the trauma he has been through. Before he can respond, Abby arrives. She’s angry he’s there. He tells her, “I had to do what’s best for that little boy.”

“Our son,” she corrects. He was going to see if they could work something out. She gets it. She accuses him of trying to hash out a plan from the overprotective mom, hoping she’ll get on board. Devon defends Chance.

Chance wanted to talk to Devon, “Father to father.” Devon tells her the question that he just asked, which was can Chance  give Dominic the love and attention he deserves right now. Chance admits, “No. I’m not sure I can.”

Y&R day ahead recap for tomorrow! Chance and Abby make a decision on what to do about shared custody while Tessa asks Mariah to marry her.