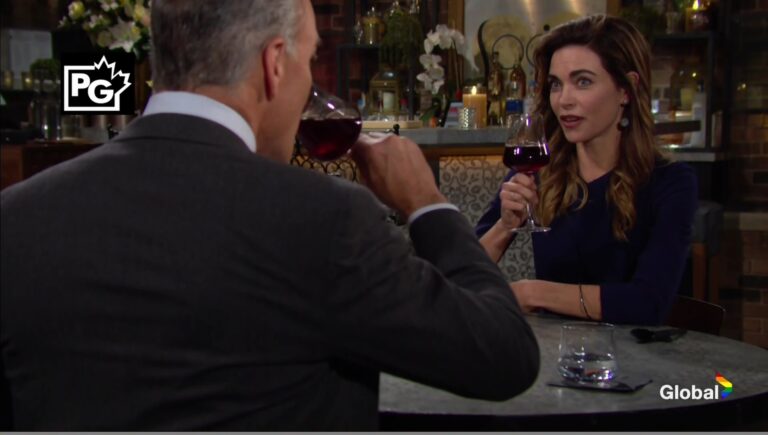 This is the Canadian Y&R day ahead recap from the Friday, June 4, 2021 episode, which airs in the USA Monday, June 7. In the previous episode, Ashland suggested shared custody but with a catch that Kyle wasn’t ready to adhere to. In today’s episode, Summer feels more insecure, Kyle learns that Tara’s broke, and in debt, and Victoria talks to Ash about his divorce.

Ashland drinks to Victoria for having dinner with him at Society. They flirt about spreadsheets and banter about business. She suggests he talk about what’s going on in his personal life. She offers to listen if he wants to talk. He thought he and Tara shared the same values and goals. He didn’t see divorce in the cards. Victoria gets it. She recalls feeling the same with her ex-husband. Ashland can’t let go of anger when he feels wronged. Victoria finds civility the best revenge. Ash doesn’t comment. They met at an auction house where she worked before she designed shoes. He says she used her job to land a wealthy husband but he thought she was different. Victoria says maybe she wasn’t a gold digger. Ashland boasts how he took her everywhere and now he despises seeing the furniture he bought from her at auction. It reminds him of her betrayal. Victoria suggests he was too busy for her, which is why she cheated. Locke says she has a way of pulling out the truth from him. He admits Tara didn’t just have an affair, though he won’t say what else she did. “She’s no saint.” He asks about her, rhyming off twenty questions. He winds up asking what her superpower would be. She’d want to stop time and her kids would want her to be incapable of saying no. She talks about what her kids do like playing hockey and making jokes. Her kids will always come first. Suddenly, she is sorry and thinks she’s boring him. He admits though he adores Harrison that Kyle’s the father of Harrison. Victoria’s rocked. He wonders how she could have tricked him that way. The idea of sharing the kid with the man his wife cheated with is almost unbearable. Victoria reminds him that he’s still Harrison’s dad. She’s not her son’s biological mother and he still needs her. Nearby, Abby finds Summer and says, “You’re the one whose boyfriend found out he has a child.” Summer admits it. Abby realizes Tara crashed the engagement party. Summer reveals all. “It’s been such a nightmare.” She says Ashland is the scorned husband of all people. Summer has spoken with three people about this and admits she’s still so insecure. Abby suggests she keep an eye on Tara and start planning her wedding. Tara coming to GC single should not scare her. It should motivate her.

Kyle arrives home. Tara says Harrison’s not asleep yet, she says. She calls what Ashland is suggesting cruel, not to let Kyle in Harrison’s life. Kyle spoke with his lawyer. They’ll fight him. She spoke with her own lawyer. He advises she should give in. “You asked me to commit and now I’m all in.” Tara mentions signing a prenup. He holds all the cards. She gets nothing if she leaves. She’s drowning in debt, not making a profit. “Who knows when I will?” Kyle suggests getting her a job at Jabot. They discuss issues that could crop up in court. Tara admits while Harrison was with the nanny, he fell and cut his chin. The kid was fine. It was a minor cut but Ashland went ballistic and blamed her for not being with him. Ashland now calls her negligent when he gets angry. Kyle thinks she’s a good mother. When he asks if there is anything else he can use against her, she denies it. Kyle asks to read his kid a story. She’s cool with that.

At the condo, Lily and Billy are ready for Jack’s visit. Billy heard Tara Locke moved into Jack’s but Lily says they’re not grilling him about it. Jack arrives with a gift. They discuss how he’s launching a few products. Billy tries to get on the topic of business but Lily suggests a ‘house tour’. Later, Billy brings up Ashland. Jack’s annoyed and Lily takes Billy aside to tell him to can it, but he can’t help himself. They sit and drink and Billy starts grilling Jack. Lily apologizes on his behalf. Jack refuses to be his brother’s source. They get heated and Jack blurts that he can’t discuss it since it might hurt his grandson. Billy’s eyes widen. Jack tells them the whole story and reminds Billy that he has a moral obligation to care for the child. Publishing it will harm him and infuriate Locke. Billy knows but wonders what ChanceCommcan do for the cause. Lily and Jack remind him to stay out of it. He starts asking if Tara’s asking for full custody. Jack is pissed and stands up. He’s heading home. He stomps off and Lily asks, “Great, are you happy now?” She wants to drop the story but Billy doesn’t look as though he wants to.

At home, Summer calls for strawberries and texts Kyle to ask when he’s coming home. She insinuates that there’ll be sex waiting. Kyle texts back that he’s reading the kid a story and wants to introduce them as soon as he can. He’ll be home soon as he can. She says she’ll be waiting and then rummages for a sexy outfit, while Kyle reads a book called, “Daddy and Me.”

Kyle returns home and Summer’s in a sexy negligee. She wants to fast-track their wedding. He kisses her passionately in response. “Is that answer clear enough?” She goes in for more. Kyle is showering after sex when Summer reads a text from Tara who thanks Kyle for his support and for reading to their child.

Abby sits at the Chancellor mansion and makes a video for Chance. She rehashes what they can’t do like have their own kid or be together but she’s thinking of his proposal which helped give her advice not to shy away from love.

Jack returns home and asks Tara to chat. He wishes he would have stayed home and had Mac and Cheese with Harrison. He recalls Kyle not getting enough of it when he was a kid. “Must be in the genes,” Tara says. She tells him she has an estranged brother in Virginia and thanks Jack for his hospitality.