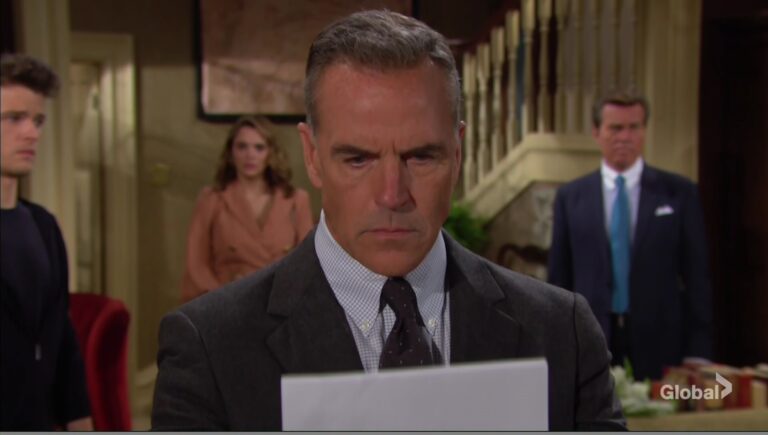 Y&R wasn’t bad this week, but there are still ongoing issues of non-drama that plague viewers.

Is there drama coming or are we wasting our concerns?

I love me some Imani but I don’t trust the woman. Why is she so adamant that Amanda look elsewhere in Newman for Richard’s murderer? And now she’s moved into Grand Phoenix to be closer to her? What’s her angle, or am I just looking for drama in a soap that refuses to give us any?

Kyle as the father is a letdown

I didn’t believe Kyle’s Harrison’s father because it’s too easy. It’s not soapy. I assumed Tara rigged the paternity test. But at the end of the week, I came to my senses and remembered that’s just too soapy for Y&R. Too dramatic. I wanted Ashland to get his own DNA test completed to expose her for fraud, and he was going to, but instead of that happening, he offered shared custody to Tara if she’d ensure Kyle wasn’t a part of Harrison’s life. That was his bold move? This isn’t very cutthroat of him. He didn’t retaliate, he didn’t try to kidnap the child the way Tara did. It doesn’t look like he’s the monster Tara’s painting him as. Instead, he showed us that he’s just a man who feels threatened by another man loving his son and perhaps wants to punish Tara for basically ruining his life. Sure, it’s maybe childish but it’s not dastardly.  Tell me again why we’re supposed to shake in our boots when Ashland’s on? The man overlooked Victor Newman almost letting him die. He’s not scary in the least.

Tara is the one who asked Kyle not to claim paternity of Harrison because her marriage wouldn’t survive and Ashland was the only father Harry knew.  Then suddenly, she told Ashland she cheated on him and then turned up in Genoa City and rushed Kyle into bonding with his son and has the kid calling him daddy. Manufactured drama.

Summer told Kyle it was risky forming a bond with Harrison when they didn’t know what the outcome of the custody agreement would be. I agreed wholeheartedly. Summer and Kyle don’t need to put off their wedding, which has zero to do with the child being a part of his life, but Kyle should have put off getting to know Harrison until Tara and Ashland’s custody issues were solved.

Kyle told Summer that when the time was right, he wanted to introduce her to Harrison. After five seconds of knowing the child, he wants to wait to introduce him to Summer, which of course has only created even more insecurity in his fiance. With all that blathering Sally has done about the job in Milan, I’m left wondering if Summer will take it. I almost wonder if she should, just to get away from the crazies of GC who try to force drama from the most mundane of things.

Tara goes missing and nothing becomes of it

Tara took her kid and went to the park without texting Kyle to let him know where she’d be. It seems like this is her MO. And then Kyle’s so dumb that instead of calling Tara, he called Jack, looking for her. The scene ended with its usual lack of drama which meant I went looking for some and found it in what Tara was wearing.

Only on Y&R does a woman take her kid to the park in heels and a gorgeous white jumpsuit. And now she’s going to get him chocolate ice cream. Will it wind up on her outfit? Enquiring minds want to know. #YR pic.twitter.com/tqvNlcwliu

Such manufactured angst between Billy and Victoria really isn’t necessary. I’d like them to finally be off each other’s radar and for her to find someone else. Billy didn’t bother to tell Victoria he was moving in with Lily, which I couldn’t care less about. It’s non-drama. But he said he didn’t tell her because she was out of town and because they had to make a decision fast on the place.

Here’s the thing. There are 24 hours in a day. They both have cell phones and they share custody of their kids. A quick text would have sufficed to tell her what was going on. Literally, it would take ten seconds. “Moving in with Lily. Talk details when you’re back.” I’m sure she’d have called him back when she was bored off her ass in the hotel room after work or when she was sitting at the bar eating dinner, and they could have discussed it. (I’m projecting since my business trips were similar!) It would have meant she didn’t react to Lily jealously.

Sometimes I think Billy enjoys the ego boost from his stupid machinations.