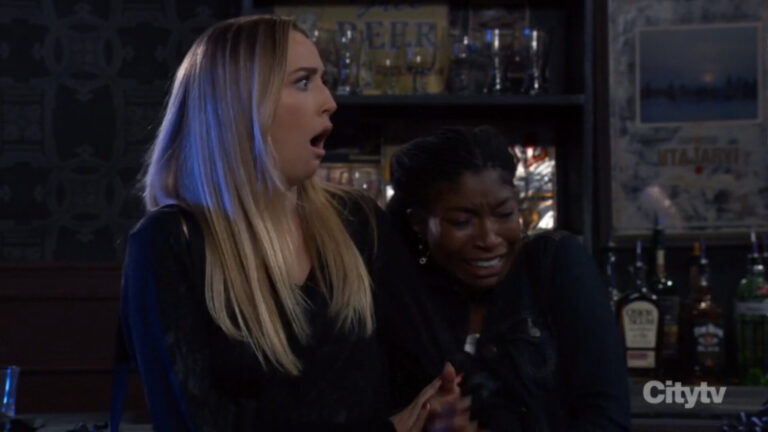 General Hospital recap for Wednesday, June 15, 2022. In today’s GH episode, Sonny says the wrong thing to Nina, Brook Lynn looks for dirt on Linc, and Austin has a mysterious meeting.

We also have Tuesday’s GH recap where Cody caught Spinelli with Zelda and Sonny and Carly talked living apart.

Chase is eating cereal and watching the game at home when Brook Lynn calls and reminds him he’s supposed to be with her at the pool. He hangs up.

When the game ends, he joins Brook Lynn at the pool. She spots Linc wandering in as Chase tells her how relieved he is to have a night without concentrating on her old manager. Linc talks to Selina and she walks off.

Brook Lynn starts prodding Chase to get his detective intuition going. She goes over how important music to her is and how owning her music is the only way she can participate in it now.

Linc strolls over and refers to her as his favorite ATM. He rubs how profitable her songs are to him in her face. When he walks to the bar, Chase follows and tells him to leave Brook Lynn alone.

As Linc is distracted, Brook Lynn goes through his pockets and finds a card for The Savoy with a password on the back. She steps back before Linc returns, picks up his jacket, and walks out.

Brook Lynn tells Chase that was a perfect diversion and now she knows what Linc is up to. She’s eager to run off to The Savoy and find some dirt but he suggests they be cautious. As soon as his back is turned, she takes off.

Sonny bumps into Nina at The Savoy. She’s about to leave but he offers to make it worth her while to stay. They get a table and he tells her it’s time for them to stop denying there is something between them.

She doesn’t know. He asks her to go somewhere that’s more their speed.

Dante joins Sam at their table. She asks him about the trouble he used to get into with Cody. He explains that his mom sent him to camp to keep him out of trouble in the city.

All that nature wasn’t appealing, but getting away from his family was. Then he met Cody, who was a country kid. They had some good times. Cody taught him how to deal with horses. He may be a screw-up but he has a heart of gold.

Curtis gets a text from Selina saying she’s on the way. TJ shows up to check on him. They both have a lot to process since they learned that Marshall is a schizophrenic. At least they know that Marshall just wanted to protect him.

Selina arrives and Curtis sends him away. She wants to confirm the details for tonight’s game. After she asks about his family problems, she offers to be there for him if he needs to vent.

Curtis wanders off to the bar and urges TJ to go home for the night. TJ offers to stop by and see him in the morning.

Cody follows Zelda to a room in the Metro Court. He waits in the hall as Spinelli darts in and out of the room, leaving a Do Not Disturb sign on the door.

Cody eavesdrops as Zelda assures Spinelli that what is really going on won’t be exposed. They play music to drown out the talking.

When Spinelli walks out, Cody corners him and claims he knows what’s going on.

Cody heads to The Savoy and corners Dante and Sam as they are about to leave. They have to head out and go. Cody gets the bartender to direct him to Brad.

Back at the Metro Court, Spinelli tells Zelda that Cody is going to be a problem. He made him go to an ATM.

Sonny and Nina go to Charlie’s. It may not be the Tan-O, but reminds them of their connection. He knows they can’t go back, but they can think about what’s next for them. He kisses her.

He’s made peace with his life moving forward looking more like his life in Nixon Falls than his past in Port Charles. Carly has made it clear that they are done. Nina asks if they just kissed because he had a fight with his ex-wife.

In the Pautauk woods, Gregory and Finn talk about the weight on Cam’s shoulders. Gregory assures him he can help him out.

Cam tries to help Aiden with his guitar but that only makes the kid angry. Finn takes Wyatt aside and asks him if he can include Aiden in some activities. Wyatt walks over to Aiden and asks him for some help picking songs.

Cam wanders over to Finn. He knows how much he cares about his mom and the rest of the family. He’s sorry for jumping on him about Liz. The truth is he’s just been scared. Finn admits he’s scared too, but they can get through this together. They shake on it.

As Maxie and Austin pick up sticks and discuss marshmallows, they hear someone in the bushes. He tries to downplay it. When they step toward the noise, Gregory and Violet pop up and she shouts boo!

Everyone gathers together around the campfire for a song and to roast marshmallows. Maxie eventually notices Austin has slipped away.

Austin meets someone in the woods. He tells them that the next time they want to talk to him, they find him alone and leave Maxie out of it.

Trina and Joss arrive at the bar. It’s pretty rough. Since it’s close to Spring Ridge, they assume it must have been easy for Esme to sneak in and get a stolen phone.

The bartender corners them and demands to see ID. They pull out fake IDs. “These are totally bogus,” he tells them. Trina says they are there to get some fake phones. He points out some dude at the bar.

They immediately walk over and make a phone order. It will cost them a grand. Trina wants to make sure he’s the right guy since they’ve been scammed before. She shows him a photo of Esme and asks if he sold a phone to their friend. He recognizes her.

When the cops arrive, everyone starts to run.