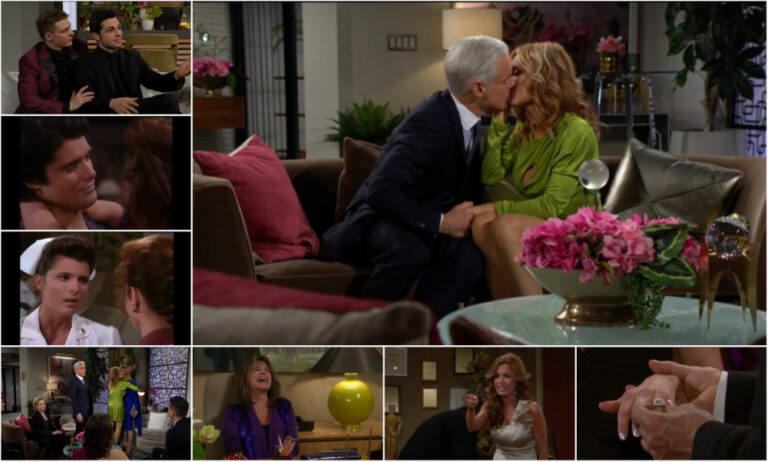 In this episode of CBS’ The Young and the Restless, Lauren’s standalone episode since today marks 40 years since Tracey Bregman’s been on the show. It showcases some good old times and Fenmore comes home with his boyfriend Trey, while Gloria and Kevin appear.

In the previous episode, Phyllis worried about Daniel’s project, Chelsea pitched a new podcast to Billy, and Victoria wondered what Tucker was scheming

Michael compliments his ravishing wife. She won a Lifetime Achievement Award for Leadership in fashion.

Kevin and Gloria appear and there are hugs all around.

He says Chloe’s traveling for business but wanted to be there. Chloe rushes in. “Wait!”

She doesn’t want the party to get started without her. Fenmore and Trey pop in and greet everyone.

Fen introduces Trey as his boyfriend.

Gloria’s surprised but Michael’s glad to meet him in person.

Trey’s a buyer for Fenmore’s in Nashville and an icon for him.

He’s thrilled to meet her.

Everyone starts catching up.

Lauren flashes back to talking to her mother Joanna Manning (Susan Seaforth Hayes) while she tells everyone she was a daddy’s girl.

Neil Fenmore (Jim Storm) gave her everything. She talks about her love of music as a teen and how she thought Danny Romalotti was the cutest guy she’s ever seen.

Michael rolls his eyes. She flashes back to Danny letting her sing with him.

She says he was nicer than her. The mean girl in her came roaring out when she found someone rivaling for his affection.

Traci Abbott. She flashes to talking to Traci about how close she and Danny were getting.

Getting in trouble is how she met her first husband. Paul Williams caught her stealing.

Back then, he was a private detective and flashes to being with Paul.

His parents were the salt of the earth but Mary was uber-protective of her family.

They never got along. Mary didn’t like that she misrepresented herself.

Lauren thought she knew what was best for him. Gloria says she always approved of Lauren and doubts she and Mary would have gotten along.

Lauren agrees. They ask why it ended with her and Paul.

Lauren talks about Shawn Garrett (Grant Cramer) who was a fan who became obsessed with her.

He tried to ruin Danny’s career and threatened to kill Paul if she didn’t divorce him.

She divorced him and pretended to love Shawn. He found out and lost it. He buried Lauren alive and Paul rescued her.

He was her hero.

She said her dad died when she was in her 20s and she was unprepared.

She flashes to Lauren reading her dad’s last request to take over the business.

She talks about marrying Scott Grainger (Peter Barton) and then she met Sheila Carter (Kimberlin Brown).

Threats were made when Sheila messed with Lauren and Scott. Sheila became pregnant with Scott’s baby.

She flashes to learning about it and says she too became pregnant. With a son.

Dylan didn’t survive and Sheila taunted her and they fought in the chemistry lab.

She recalls how far Sheila went to keep them apart and kidnapped her and Molly.

It was then that she learned her son was alive.

A fire started when Molly kicked Sheila and she fell into some lit candles.

Lauren says she went through decades of hell because of Sheila Carter and she’d better not return to start things up again.

She talks about living in L.A. for a while and she’s glad he’s back because she met Michael.

Kevin boasts that he was the reason they got together.

He was hot for Lauren, but she didn’t feel the same.

He was angry and yelled at her when he learned the truth but Kevin says she cared for him, even when he was a trainwreck.

Michael says he was a goner when he met her. Lauren fell madly in love.

They flash to marrying.

They got engaged and Gloria says it was an elegant wedding ceremony.

It turned out that Lauren and Jill were related as sisters. She says they drive each other up a wall but mostly get along now.

Phyllis arrives to celebrate with Lauren and meets Fenmore’s boyfriend and she says Phyllis deserves a chapter in her book if someone were ever to write one.

Phyllis says they have a special bond. They flash to Phyllis learning she was pregnant and how excited she finally was.

Lauren chokes up as she recalls how often Phyllis has shown up.

Phyllis tells Fenmore and Trey to watch them for relationship goals.

They flash to Lauren and Michael almost divorcing.

He told her he didn’t love her and she cried, refusing to accept it.

She cries as he tells her they’re all the better for it. He tears up.

Everyone files out and Michael recalls bad things happening like the time the boat blew up and Michael got cancer, while Michael drove Lauren into another man’s arms.

Lauren says they made it this far because when they pledged to be together, they meant it.

They flashback to their first-year anniversary. Michael got her beautiful emerald earrings. Michael promises to love, honor and cherish her until the day he dies. They kiss.