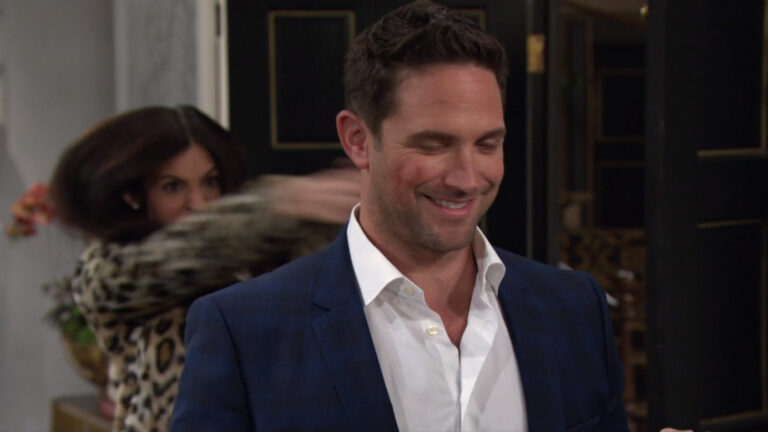 In today’s Days recap, Wendy apologizes to Gabi and gives her a pep talk about Stefan, and EJ drops a bomb on Li.

In the last Days recap, Paulina hired Steph in the fight against Sloan, Eric and Sloan had grief sex, and Marlena was bothered when Kayla was not to be found in heaven, while Susan wasn’t who she seemed to be. In fact, she seemed to be possessed.

Allie asks her to admit that while her grandmother was dying, she was macking on her brother. Chanel denies it.

They argue some more and Chanel finally admits it. Allie’s pissed.

Chanel tells her about how everything went down and that it started out with her comforting Johnny who was a wreck.

Emotions ran high and it happened in the heat of the moment. It was meaningless. “I chose you,” she says. She wants to be there for her, to help deal with this loss.

They argue and talk turns to Chanel’s civil case. The women argue about who has the most issues right now. Allie takes off to figure out Marlena’s arrangements.

At the Johnson condo, Tripp learns he can’t talk to his mother on a call with Bayview.

Johnny turns up, sorry he just dropped in.

He says his dad and siblings went to take care of his mother’s service.

He apologizes for saying unkind things to him about his mother. He knows what Ava did wasn’t his fault.

He was upset about his grandma dying and took it out on him. He was out of line. Tripp accepts his apology.

His mom is sick. Johnny’s sorry for hitting him. He knows he was going through a lot. Tripp brushes it off and Johnny takes off.

Gabi is on a call with Will, giving her his condolences about Marlena and Kate’s deaths.

She offers to take Ari and once they disconnect, Wendy shows up with flowers. “What the hell do you want?”

Gabi demands. Wendy wants to apologize again. She was horrified when she heard what Li did to Stefan.

She came close to telling her the truth many times. Gabi’s prepared to close the door in Wendy’s face while Wendy keeps up her explanation.

She wanted Li to be happy and she made him happy.

He’s her big brother and she loves him. She knows it’s no excuse. She was wrong.

Gabi accepts her apology and admits she would have preferred a designer handbag but she loves lilies.

She lets her in and puts the flowers in a vase while she lets Wendy know that Stefan was going to be deprogrammed but changed his mind.

He has feelings for “that cow” Chloe Lane. Wendy’s shocked she went to see Marlena to deprogram him but Brady wouldn’t let her in and now it’s too late.

It repulsed Stefan who never wants to see her again. Wendy thinks she can compel him to get it reversed.

Gabi thinks of a court order but Wendy says no.

Maybe get his family to force it. Like an intervention. Gabi likes the idea but Marlena is gone and Rolf’s in the wind.

Wendy didn’t expect her to give up. She goes and Gabi agrees she can’t let it go.

At the DiMera mansion, Stefan talks to Stefano’s portrait about going after EJ.

He knows his father would disagree with him when he says that his brother deserves to pay. Nicole turns up.

He gets her coffee while she admits she heard him talking to Stefano’s portrait. She asks who he was talking about. He lies. “Kristen, of course.”

He fills her in on Kristen’s arrest and Marlena’s death. Nicole had no idea.

She takes a seat and tries to wrap her brain around the news.

Stefan read the news and learned she wasn’t a small-town shrink but one of the most respected psychiatrists around the world. Nicole feels for her kids.

Stefan wonders where EJ is. He tells her that EJ was responsible for brainwashing him.

Nicole had no idea. Stefan knows she’s lying. She ignores him and takes off to work.

He reminds him not to forget their deal that he had nothing to do with Stefan’s brainwashing.

EJ shows up and fires him. Li says he can’t.

EJ says he told his brother everything and now, Li has nothing to hold over him.

He says Stefan respected it and they’re going back to being Co-CEOs. Li doesn’t think his father will stand for this.

Unless he’s proven guilty of a crime, Wen won’t let this happen. EJ says Wen’s not a DiMera.

As a CEO, EJ has a right to make this decision. He tells Li that “you don’t cross a DiMera and get away with it.” He leaves and Li kicks his bed in anger.

Eric wakes up in Sloan’s bed as she reads his mother’s obituary.

She says there are some wild things in here. It talks about his mom being a serial killer and that it’s a lawsuit.

He tells her the paper is owned by a family friend and doesn’t need to be fact-checked. He kisses her.

Wendy visits Tripp and learns Johnny came by to apologize earlier for hitting him and being rude.

He tells her he didn’t want to intrude on his siblings doing the arrangements for Kayla and he can’t visit his mom.

He’s lost. Wendy says there’s no roadmap. In time it gets better. She suggests baby steps.

They talk about Gabi forgiving her. She wishes she could help Gabi with Stefan in getting deprogrammed.

Stefan offers to go to the cellar to get some champagne.

EJ thinks it’s a bit early so Stefan jokes that he’ll make him a Mimosa. EJ leaves the room and Stefan toys with a vial of liquid before he spikes EJ’s drink.

Nicole stops Eric outside the pub with her condolences.

He admits he feels numb. She offers a hug and he agrees to it. They embrace and Sloan appears.

It’s awkward. Nicole’s cold. Sloan tells Eric he left his phone in her bed. Eric and Nicole both wince.

Johnny shows up at Allie’s. Chanel says his sister isn’t there.

Back at DiMera manse, Stefan finishes drugging one of the mimosas and smiles a self-satisfied grin.

Once EJ drinks this and the board sees how he’s behaving, he can kiss the CEO job goodbye.

Gabi sneaks into the room and picks up a potted plant and belts him with it across the head. Stefan goes down.