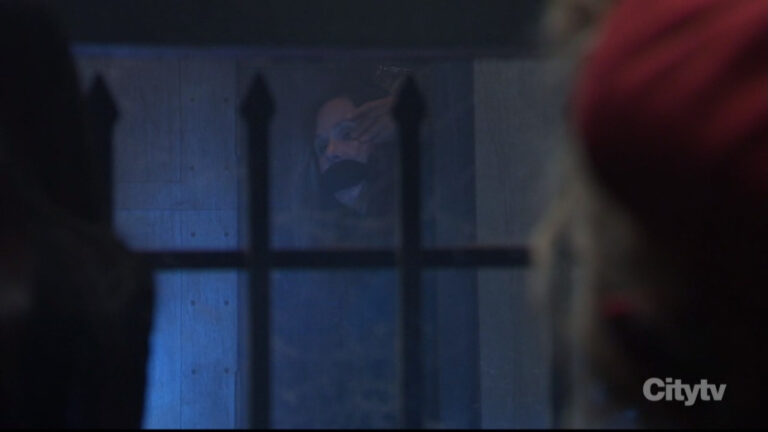 General Hospital recap for Tuesday, January 24, 2023. In today’s GH episode, Laura encourages Liz to make amends with her mom, Maxie and Sam talk about the hook, and Anna and Valentin enter the catacombs.

We also have Monday’s GH recap where Cam confronted Joss for cheating on him, Nikolas brought Carolyn to town, and Esme agrees to let Sam go looking for her father.

Dex walks into Sonny’s penthouse and admits he hasn’t been able to stay away from Joss.

He explains that he interrupted the hook attacking Britt and Joss. Sonny wonders why he’s hearing about this a month after it happened.

Dex reminds him he’s had other things on his mind. He didn’t go to the police because he didn’t want his gun traced. Britt covered for them.

He explains that he took Joss back to his place. After flashing back to having sex with her, he glosses over that and claims she just stayed a few hours and then he took her home.

Sonny isn’t thrilled Carly already knows all this. Dex offers him his gun but Sonny tells him to keep it and get more practice in.

The boss orders him to look in his eyes and vow he’s told him everything.

Dex insists he has. They chat about the Willow situation and Sonny thanks him for looking out for Joss.

“You’re doing good. The sky is the limit for you,” Sonny tells him.

As soon as Dex is gone, Sonny calls someone to check on him.

In Joss’ dorm room, she asks Cam to keep her seeing Dex a secret. She’s afraid of what Sonny would do if he finds out.

Sobbing Joss says she would never hurt someone else for the sake of payback.

“Maybe you don’t know me as well as you think,” he says. He’s outraged that she’s been lying to him. He’s not doing a favor for her and her boyfriend.

He’s looking forward to the day when Dex cheats on her. Their friendship is dead and that’s on her.

She tells him to blame her, not Dex. Cam won’t keep Dex’s secrets for him.

Joss hates seeing him this hurt. She’s sorry since he’s a good guy, but she asks him for this favor.

He’s not sure he will ever be able to find it in his heart to forgive. “Then I’m going to have to tell Dex before this gets back to Sonny,” she threatens.

As he heads out, he says her secret is safe. He’s not about to post on the internet about her dating a mobster.

When she’s alone, she calls Dex and tells him she just lost her oldest friend. But she doesn’t think they are in trouble.

He says they are all good and he’s convinced Sonny nothing happened between them.

Sam joins Maxie at The Savoy. They miss Britt. Maxie has been planning her memorial. She’s released her party was a goodbye party.

Sam admits they are working together and explains that she went to see Esme and is now searching for her nanny because she might have information on the hook attack.

When she mentions she and Dante are planning to go to London, Maxie squeals in excitement.

She admires the way she has moved on with a new man. Sam says it was easy. They fit really well together.

“That’s awesome and dangerous,” Maxie says. All that domesticity can get in the way of romance. In London, they will be alone together and can have some romance.

Sam hopes they get the chance. It will be their first trip together and she’s excited for that.

Laura joins Liz at Kelly’s. The nurse tells her that Carolyn is in town. They talked and she seemed sincere about wanting to make up for things.

Laura can understand that she doesn’t trust her. She’s starting to feel the same way about Nikolas and tells her about his plans to sue for full custody.

Liz tells her that she and the prince are back to being just friends.

The mayor offers to talk to Carolyn for her. “You’re the mom I always wish I had,” Liz admits, wondering if she should give her biological mother another shot.

Laura is encouraging and asks if she can meet her mom halfway in the healing process. Liz admits she’s always dreamed of her kids knowing their grandparents. But she’s not sure she can let go of the past and forgive.

Laura will be there for her no matter what she decides. She encourages her to open up about what’s going on with the prince.

Before she can explain, Cam shows up and offers to treat them to dessert. They realize he’s trying to hard to seem fine.

Carolyn shows up at Wyndemere, and tells Nikolas that she bumped into Liz. She asks what kind of trouble her daughter is in.

He knows all about what she and Jeff did to Liz after Reiko’s death. If she wants to help her daughter, she’ll stop asking questions and just do as he says.

This rubs her the wrong way. She assumes he’s behind Liz’s problems. He admits it but pointing fingers is pointless. If she wants to help, she needs to use her skills to save her daughter before it’s too late.

He tells her that there is a young woman being held at Spring Ridge with memory loss. She needs to stay a blank slate for his sake and Liz’s.

Carolyn gets outraged and he pleads this is for the greater good. This is her chance to atone for what she did to her daughter.

She tells him to go to hell. She didn’t do what’s best for her daughter and has spent her life regretting what she did. She’s not going to compound her mistake.

Nikolas says that Liz will be the one to regret it if she doesn’t use her skills to manipulate the mind this time around.

He lists all the ways she’s failed her daughter and how he was always there for her. She thinks he’s just out to save himself.

He admits it, but he wants to save Liz too.

Anna and Valentin visit a Parisian monastery. She’s eager for his contact to arrive and take them into the catacombs.

He assures her that he and Renée are in the past and he was a different man then.

René arrives and tells them they may have to find their way in the dark.

They hide as a monk puts the candles out and closes up. Renée asks Valentin if he feels the rush.

She shows them into the catacombs. Anna gets lost pretty quick. When Valentin notices, Renée suggests they leave her and enjoy themselves.

As she gropes him, she reminds him of their old feelings and the wild times they had.

He holds back and Anna tracks them down, asking if something happened while she was gone.

They continue through the catacombs and soon discover Lucy tied up.