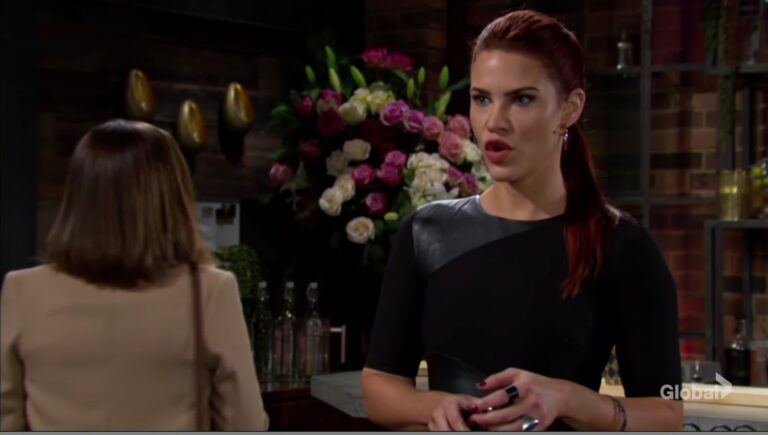 Canadian Y&R day ahead recap for Friday, January 28, 2021 episode, which airs in the USA Monday, January 31. (Recaps live by 5:45 PM EST daily.) In the previous episode, Noah apologized to Tessa and Ashland was upset that Victoria went and bought Newman Media without his input. In this episode of CBS’ The Young and the Restless, Adam confronts his dad, Sally lends an ear and Victoria’s unhappy with her husband.

In his office, Adam’s shocked to hear Newman Media is sold to Victoria. She gloats and says there’s no reason to sue her for the name since she owns it. “I’m the Newman in charge.” Victoria apologizes, though insincerely. Adam admits their dad called earlier and assumes this was why. He didn’t answer it.

He should have known. Victoria says most employees can keep their jobs after. She measures his wall and says she’ll need a decorator.

He raises his voice and asks her to do this another time. She encourages him to call their father and work the details out before she tells him she thinks she has a lot to offer as a mentor.

Ashland meets Nate at Crimson Lights. He’s impressed how Locke is thriving, physically. Locke feels he’s made a mistake in backing off in his business. Talk turns to Nate discussing how hard it is not to be able to perform surgery. He’s glad for the job he has, though. Ashland gets it.

He needs something new and Ashland has a proposal. Come work for him at Newman Locke. Nate thanks him but he’s not interested in business. Ashland wants to help him since he was there for him. Inside, Faith talks about taking a trip with Sharon to her top colleges. Rey appears and Sharon agrees to it.

She still wants her to consider GCU.

Rey whispers that she wants to keep her daughter close to home. Faith laughs and talks about spreading her wings. Sharon goes to take a call and Faith talks about friends going to school overseas. They agree it’s best not to mention that for now. Sharon returns and Faith goes to tell Moses the good news.

Sharon can’t believe how fast her kid is growing up. Back outside, Victoria appears and is obviously surprised to learn Ash proposed that Nate work for them. Nate goes and she questions him. He thinks they could expand Ask MD Now. She wished she’d be consulted on this.

She doesn’t make offers to a friend, especially on a whim. He nods. She fills him in on her gloating to Adam when he learned that the company was sold. She thinks he’ll quit before working for her. Ashland wishes he could have seen that.

At Society, Sally’s angered by something she sees on her tablet. She jumps up and confronts Chelsea that her videos were heavily edited and shorter now that she was cut out of them. “And why is that a problem?” Chelsea asks. Chelsea says the interviews were supposed to be about the designer, not the Sally Show.

Sally says she’s the face of the company. Chelsea calls her a newcomer and Sally denies that. Chelsea thinks it’s time to stop feeding Sally’s ego. She goes to get food before she heads out.

Get to know about Robert Newman (Ashland Locke)

At home, Chance threw together breakfast with Abby. They’re happy they got to spend time together last night and she comments on his fancy breakfast. He didn’t have to go to the trouble. He jokes that he’ll give her granola bars next time.

He admits he got more sleep last night. Abby, on the other hand, was up thinking about getting him therapy. He doesn’t want therapy. He just wants her. She urges him to go into therapy. There are things he probably doesn’t want to tell her, like contacting the wives of soldiers lost.

Chance would have told her about it. He didn’t get a chance.

Abby again says she wants him to heal and there are things he won’t necessarily want to talk with her about it. He instead thinks he just needs to keep busy. He wants to go back to work and is off to talk to Rey. Abby’s shocked since he decided to spend time at home.

“You can come with me,” he says. She refuses. He should go alone and if this is what he needs, she’ll be there for him. They hug. He goes and Sharon turns up. Abby tells him that Chance needs therapy and is refusing. She fills the therapist in on his nightmares and how he’s reaching out to those wives who had husbands die. He also blames himself for Devon pushing for shared custody. Sharon assumes he’s overwhelmed.

Abby asks if he needs therapy. Sharon thinks  Chance should be there for this conversation. She’s not comfortable assessing his issues third hand. Abby maintains he needs help. Sharon can talk to him but he needs to decide if he’s ready.

Chance bumps into Chelsea at Society. He’s looking at a photo and shows her a few. She shows him some of Connor and asks after Abby and the baby. He tells her Dom is with his “other dad, Devon.” Chelsea’s smile freezes.

He tells her about the shared custody agreement. She calls it complicated but she can relate. She is Johnny’s biological mother. He’s sorry. He forgot. She’ll always have affection for him but he deserved to be with a couple who could give him everything.

It’s hard to watch someone else raise their kid. He admits Abby’s struggling. Chelsea says that she was never another mom to Dom and she doesn’t think it’ll be confusing.

Adam arrives at the ranch. Victoria came by to rub his nose in the news. Victor calls that unnecessary. Adam asks how he could do this without consulting with him. Victor doesn’t need his son’s approval. “It’s business.”

Adam doesn’t get the point of the deal. He asks for his agenda. Victor says he’s staying on as CEO. Adam thinks that’s worse that he negotiated on his behalf. Victor says he’ll be running “the remains of Billy Abbott’s dream.” Adam wants to be valued to be included in decisions or affect his life. Victor tells him he either stays on or he quits. Either way, the deal is going through.

Adam takes a big drink of scotch and questions why his feelings changed toward him. “We were partners and I’m what, some sort of lackey?” Victor denies it but says mistakes were made with Billy. Adam reminds him nothing happened. Adam says Nick told him to get off the merry-go-round. Maybe it’s time he did. Victor says the choice is his. He needs an answer soon. Adam goes.

Adam returns to work and finds Chelsea and Sally upset with each other. Chelsea thinks Sally wants to tattle but she has work to discuss. Adam tells them to shut up and lets them know the company was sold. He hasn’t decided if he’s staying with the company.

Sally can’t believe it. Adam calls it “the most Victor thing” he has done. Chelsea urges him to fight. He snipes at her to give him a minute. Chelsea notices that neither seems that surprised. She questions if Sally knew.

Sally thinks fast and says that she’s stunned into silence. Chelsea goes to tell Chloe and Sally closes the door. She knows he’s furious but doesn’t think it’s complete destruction. Adam says he can stay as CEO but working for his sister…he trails off. Sally thinks it’s mean that she was here, gloating. Sally thinks he should stay, but he’s not sure it’s possible.

The redhead makes a good case for staying. He’d be CEO of a power house. He likes that. Sally suggests Victoria can’t control him and that he may be able to find a way to control her. Adam is interested and asks what’s in it for her.

She was talking to him as a friend. She admits he may be blind to having an advantage of turning his role into something bigger. He’s intrigued. “You’re good at pep talks,” he says. Sally seems worried and asks if he’ll stay.

At Society, Chance meets Rey. They talk about Devon taking the baby overnight and how tough of a decision it was. Chance says he thinks he’s ready to return to the force. Rey’s surprised. What’s changed? Chance has no answer.

Maybe it’s got to do with the custody agreement. Being normal to him means working. Rey reminds him their job is dangerous. If he’s struggling, it might do harm. Chance thinks it’ll be fine. If he can save one life, it may make up for those he lost.

Back at the coffeehouse, Sharon and Rey talk about Chance returning to the force. They both have concerns.

Back at home, Chance tells Abby about his talk with Rey. Nanny Louise arrives with Dom. Everything went smoothly. Abby snuggles him, happy to have her family back together.