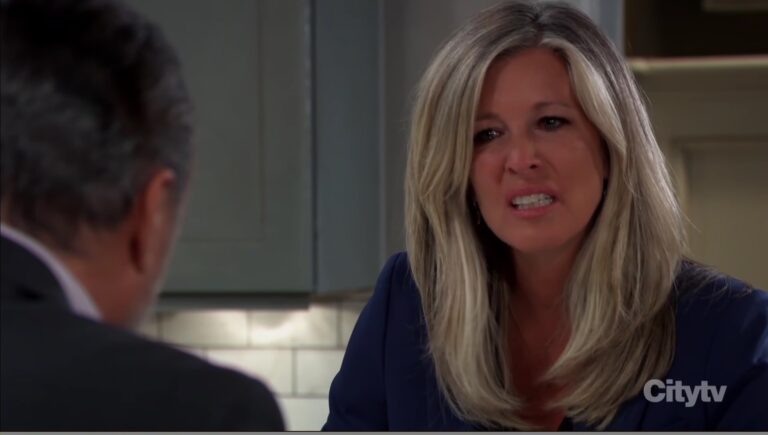 Co-Head Writers, Chris Van Etten and Dan O’Connor break down what’s going down with all of residents of Port Charles on General Hospital this February with Soap Opera Digest.

Coming up on GH!

The secret of Bailey being Louise is ready to be exposed. Everyone who had a vested interest in protecting the baby or seeing Peter’s downfall will have a role in this fraught chapter. Peter is desperate and willing to exploit every opportunity to secure his freedom and reunite with Maxie and Louise.

Meanwhile, Valentin’s realization about the baby may have come too late and will put his whole family in danger. We saw a little of this beginning in Friday’s GH episode where Valentin was knocked out and shoved into the back of Victor’s car.

Victor is slowly accumulating more allies and wealth and doing his best to bring the Cassadines together. Laura thinks it spells  trouble for Nik and Spencer’s future. She’ll fight and is determined to win.

The love triangle story between Carly, Sonny and Nina will change very fast from the first of February until the end of the month. Sonny and Carly’s future depends on his desperate bid to save his marriage.

Sam tries to balance her relationship with Dante and co-parenting with Drew. She’s torn between what’s new with Dante and  what she had with Drew in the past. Coming events are going to force Sam to confront her past and her future.

Liz and Finn’s relationship faces an early test. They face “suspect number one” who they think is responsible for “the intrusion into their lives.”

Curtis and Portia embark on a new page in their own relationship, though their pasts may not be truly over yet. Curtis pushes the envelope with Marshall.

Meanwhile, Stella watches from the sidelines, and struggles, since she can’t keep her opinions to herself. She may unwittingly unravel Marshall’s secret. The truth.

The teenager’s trip to the cabin sets things in motion for Esme to get her revenge on Spencer’s friends. We’ve seen this take place on today’s episode where she recorded Cam and Joss having sex. Not to mention her drugging Trina. This is very old school soap.

Brando and Sasha start to reassess their relationship and come to a crossroads.

Harmony and Alexis’ relationship deepens and raises eyebrows of those closest to her.

Nik and Ava enjoy a romantic respite, though their marriage will face a few tests from many, including Spencer, Esme and Victor’s growing influence.

Britt is confronted by Obrecht with an optimistic view to her future but Britt may not share that opinion, while Carly and Britt have a meeting of the minds that “might provide them with the catharsis they both need.”

Michael and Willow’s upcoming getaway could unearth secrets from their past.

Epiphany’s past hopes and dreams were rekindled by conversations with Marshall and she now will face what to do about it.

Terry’s got some excitement coming up for her it seems. A case of “mistaken identity” could lead her to a surprise new love connection.