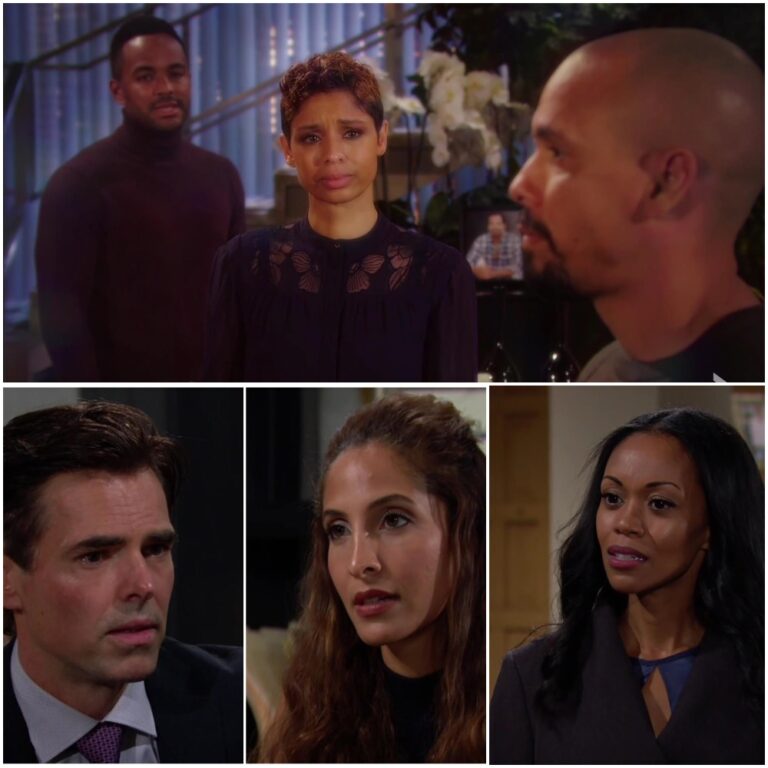 Young and Restless’ theme of the week is break-ups. Relaxed, cool, and calm breakups that nobody takes an entire hour to sit down to watch, knowingly. Sometimes we want to see a knock-down-drag-out fight. We want to hear them ripping each other apart, yelling, carrying on, throwing things. You know, crazy things that don’t happen in our reality. Give us a reason to root, Y&R! Currently, I am not rooting for any couple but I really want to!

Keep in mind that I did have a six-month hiatus from all soaps, so I’m probably missing key information pertinent to our couples. That said, these are my thoughts (such as they are) now…

Nate’s break up with Elena was bizarre. Before Sharon’s call, he told Elena that they’d talk later because “there’s a lot that needs to be said.” Then when he returned to the coffee house later, he told her he knew she was struggling and said he couldn’t stay in limbo so he was moving on.  “Whatever we had is over.” That was it. No discussion. I was a little taken aback that we didn’t get to hear her feelings. Neither even seemed to be showing much emotion. They were very flat. I may be missing something since it’s been a while since I saw these two together.

Most boring breakup of all time

Devon hasn’t had much of an expression on his face during the best of times these days. And Elena spends most of her time crying and fantasizing. Meanwhile, Amanda must be the only woman in the entire universe who found a woman’s bracelet in the shambles of Devon’s sofa and didn’t automatically ask what exactly was going on. Instead, she let it go and once she found out from Nate that he dumped Elena’s ass, she went back to Devon and then finally asked if he “slept” with Elena. Devon didn’t even have the good grace to act regretfully. He said he was sorry but I didn’t feel it. If he regretted it he wouldn’t have gone back for seconds, no? He just stared at her blankly and admitted it. He volunteered nothing. She had to drag it out of him and after she broke things off with him, he went after her to the club to discuss it further. Seriously dude? That she had to drag it out of him was bad enough. I can see he wants to try to get her back but give the woman a chance to breathe. I really hope she doesn’t take him back. He doesn’t seem to know how to be honest, loyal, or trustworthy right now.

And Amanda’s response to all of this was to calmly tell him, “It’s all good. Because now I know who you are and it’s going to be so much easier to get over you.” Not at all what people who watch soaps want to see. I wanted her to raise her voice at the very least.

The reveal that Devon was cheating on Amanda with Elena was like Amanda found out Devon forgot the toilet seat up. It was pathetic.

Right? Everyone is Way calmer in situations in#yr than in real life.
Kyle has a Baby from a Married woman and hides
It from Summer and she is Ok and supportive
From the Beginning.
I understand that skyle wants maturity from
This couple but I expected a little upset expression 😂

Lily semi-broke things off with Billy, which was a little boring and a bit puzzling. Are they on a break? If he has sex with Victoria does that mean Lily will be angry or is that allowed? Did they not learn anything from Rachel and Ross on Friends?

I never did understand the point of a ‘break’ in a relationship. Either you’re all in or not. That’s what therapy is for! But that said, Lily made a good point. Maybe he does need to examine his feelings, though I am left wondering how long that’ll take. Either way, I am glad she took charge and did it with kindness, but I don’t want Billy with Victoria. I’m not even sure I want Billy with Lily yet. I liked Billy with Amanda from what little I recalled of seeing them together. She’s free now…unless she takes Devon’s cheatin’ arse back!

These two haven’t broken up but their relationship is difficult for me to decipher right now, and they seem close to breaking up! I can’t tell if Young and the Restless has meant for this to happen or not but by having Sharon ten feet apart from Rey at all times, it looks as though she’s not as in love with Rey as she claims to be and it takes me out of the story. Course, now I think Rey’s faking, which is another discussion altogether.

Meanwhile, whenever she’s in the vicinity of Adam, they’re barely a foot apart from one another. They even shared that kiss, and Sharon and Rey haven’t shared one since. That combined with her petulance during therapy shows viewers that she’s not interested in Rey and that she wants Adam back. I’m not sure if that’s the story they’re trying to tell, but that’s how it’s coming off. Because of this, I’m not sure who I’m supposed to root for.

I know that Sharon Case and Mark Grossman are dating and therefore are able to be in close contact, same as Bryton James and Brytni Sarpy, but I hope they’re not writing the story around those who can be in close contact. And honestly, that’s how it feels. Are there not enough COVID tests to go around? I truly do wonder because over on Days of our Lives, they’re all within a foot of each other and some of them are even making out. Different protocols, I guess.

Amanda, “I look like a fool.”
Phyllis, “You’re not a fool. You’re incredible. Devon’s a fool if he doesn’t see that.”