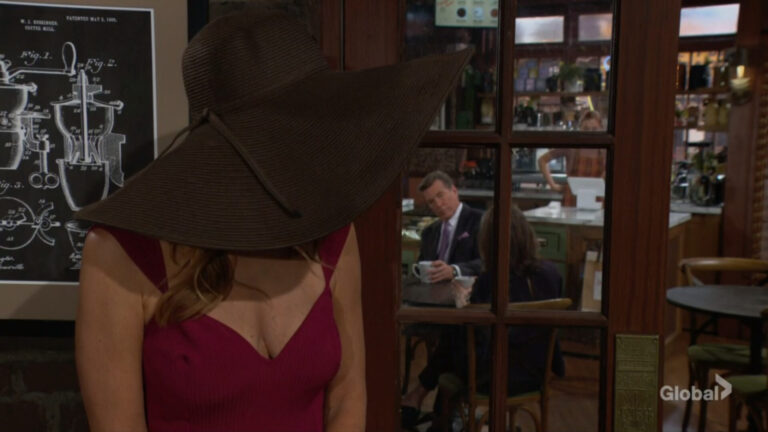 In this episode of CBS’ The Young and the Restless, Jack offers to get Allie an internship, Gloria gives advice to Chelsea and Chloe, and Kyle agrees to take the top job at Marchetti. In the previous episode, Nikki goaded Michael to dig for dirt on Diane while Diane asked Kyle for a favor. 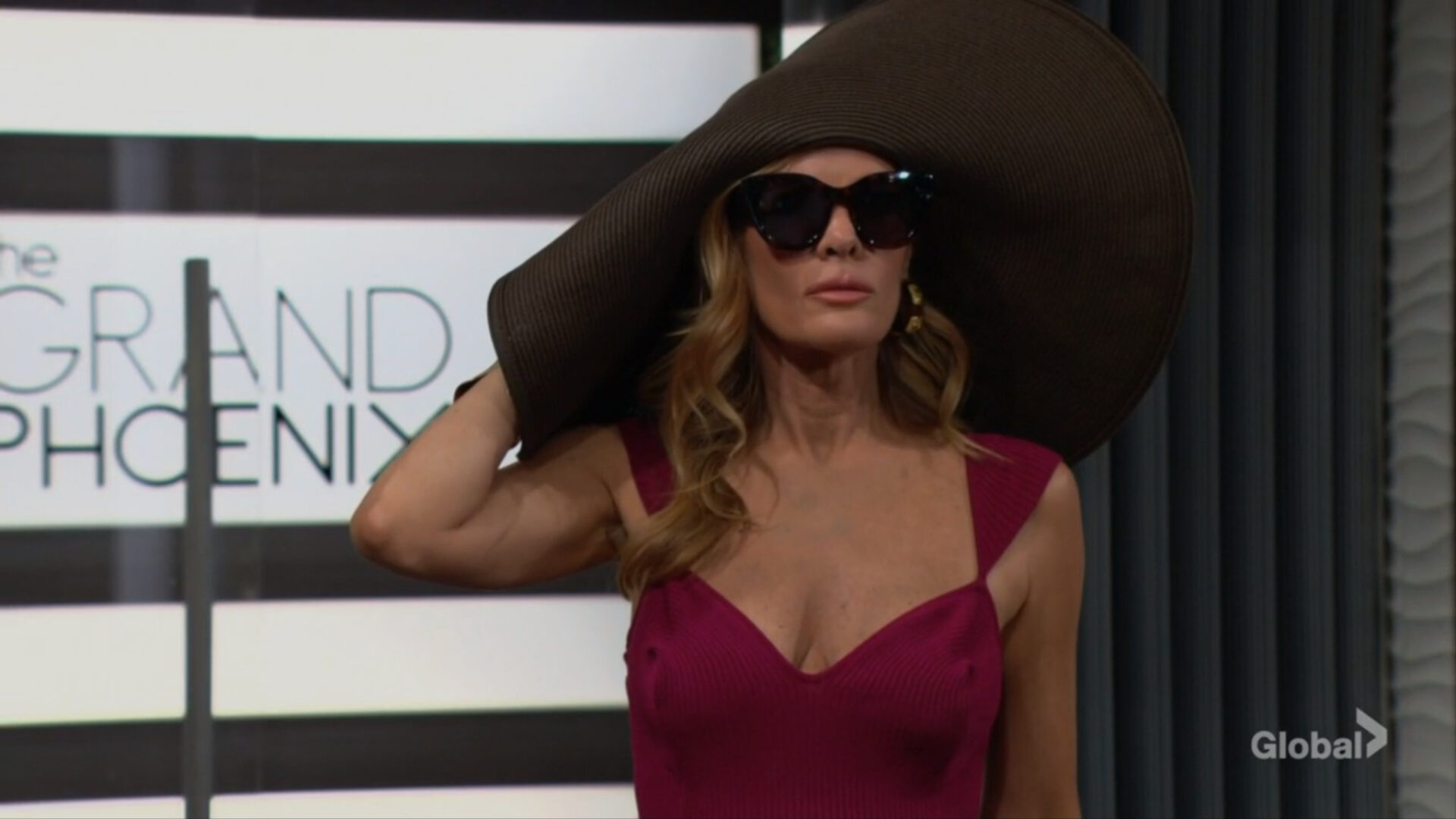 Phyllis walks into the Grand Phoenix disguised by a giant hat and sunglasses. She hops on an elevator.

At the Abbott estate, Kyle and Summer talk about how good the ice tea in Genoa City is but he misses the street food in Milan. He jokingly suggests they move back for the ravioli.

She worries about their mothers. He doesn’t see why they are her responsibility. She thinks they will kill each other and is sure his mother had something to do with thwarting Phyllis and Jack’s relationship.

Summer wonders if he can get his mom to take off for a while. He’s sure she’s committed to settling down and even hinted at a PR job. He tries to make light of this too but she’s not laughing.

They talk about his position at Marchetti. She still thinks he should be CEO but he’s not sure he wants to step away from working with his father. But maybe running a company on his own can let him prove what he’s got.

She points out it will also be part of Jabot. He admits he’s had ideas on how to turn Marchetti around. “I’ll take the job,” he agrees. She thinks that’s amazing and is excited.

Her mom calls, claiming that she is still in Georgia. After some chit-chat, Summer tells her that Diane is still committed to sticking around for Kyle. Phyllis says that’s not going to go well but people need to learn their lessons on their own.

Phyllis claims she won’t let anger eat away at her because it’s poison. Her daughter changes the topic to Marchetti and Phyllis says they can discuss that when she gets home.

Lauren arrives and the three of them discuss the possible collaboration between Marchetti and Fenmore’s. They want the department store to be the primary carrier of their products in the US.

Lauren wonders who the new designer will be. They have some ideas and suggest Chelsea. Lauren sighs. The couple explain how it would work. She’s not convinced Chelsea has the right sensibility for Marchetti’s customers.

Summer is sure that this could be a win-win for Chelsea and she’s a powerhouse. When Lauren asks about the new CEO, they assure her they won’t be a problem. Lauren agrees to go ahead with this.

After Kyle leaves to pick up his son, Lauren asks Summer how things are with Phyllis. She laughs when she hears Phyllis is letting go of her anger.

Lauren doesn’t trust Diane, but suggests she push her to try to make amends with Phyllis. Summer decides she might be onto something.

Jack and Allie have coffee at Crimson Lights and she excitedly tells him all about the stuff Ashley is doing in the lab. He wonders if his sister could arrange a summer internship for her.

Jack starts apologizing if he’s putting her on the spot. That’s not necessary; she just doesn’t think she should jump ahead of anyone else. He assures her that most of the interns are just undergraduates. They are just chances to test the waters.

She thanks him but needs to think it over. He’ll understand if it’s too emotionally difficult to follow in her father’s footsteps like that. Noah encouraged her to see that her father would be proud of her.

Allie thanks him for how great he has been since she lost her father. He assures her she doesn’t need to thank him. He’s just being her family.

Diane shows up and Allie takes off to see Noah. She reminds Jack that Allie is there because of her. That’s one of the few good things she can take credit for. Reluctantly, he lets her sit down.

They chat about Harrison and then Marchetti. She’s glad she didn’t have to move to Milan to be with Kyle. He’s surprised given how no one wants her around there. Diane’s hoping people will see she’s changed.

Jack is trying to put the past behind them and look forward to the future. She’s determined to try to win people over, but is sure that won’t work with Phyllis. He suggests she act like they live in separate universes.

As Phyllis eavesdrops, Diane asks if he’s hoping to work things out with the redhead. Jack says that ship has sailed. That’s a relief to her. Diane tells him he deserves someone better than Phyllis.

Chloe and Chelsea are in a corner at Society. Chloe snaps at her for humming. After apologizing, Chelsea starts going on about Rey and soccer in heaven.

Chloe looks at her sketch and notices it’s for the winter collection. Chelsea needs to get focused. They have a deadline. As they bicker about how well they work together, Chloe complains about the pace she’s working at.

“You can’t rush artistic inspiration!” Chelsea insists. Her friends points out it will all be for nothing if they miss their deadlines and Lauren halts production. Chelsea claims her new line will be so stunning that Lauren won’t care.

They continue bickering and Chloe admits she needs to babysit her or protect her. Gloria swans in and notices how ramped up they are. “You need a spiritual guru. You must be so happy to see me,” she says.

They ask her about London Fashion Week and Gloria goes on about it and how she’s been chatting up the new line. She’s been telling everyone it is brilliant. Buyers and critics are eager to welcome Chelsea back.

They’re all brilliant and have financial backing so she’s sure it will all go well. Gloria tells them the secret to success is hiring the best people and then getting out of their way. Chelsea couldn’t agree more.

The friends start bickering again so Gloria waves her finger at them. After lecturing Chloe for treating her like the crazy mother-in-law comic relief, she insists that she’s a survivor. That’s because she can see what’s of value and make it work.

They need to harness their negative energy and turn it positive to let them rocket to new heights. Deciding her work is done, she bids them ta-ta and takes off.

Once she’s gone, Chelsea returns to humming. Chloe gets a text and then says the deadline is more flexible than she thought. Chelsea shows her the latest drawing and Chloe admits it was worth the wait.

They agree to never put themselves in a position where they need to be counselled by Gloria again.

Wednesday’s Y&R recap: Adam tells Victor he knows why he gave him the CEO position