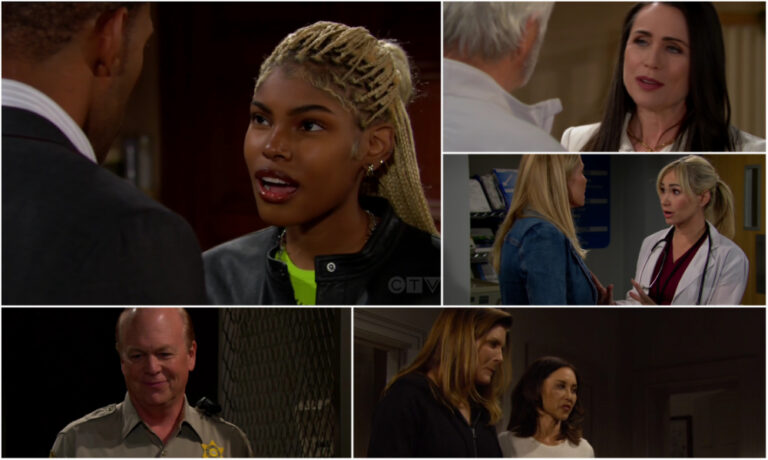 Sheila escaped from jail, Hope saw Eric and Donna engaged in an awkward pillow fight and Finn woke to mommy violence. After weeks of idling stories, The Bold and The Beautiful finally shifted into high gear. But why is so much happening off-screen?

So many questions, so few answers

After a few months of daily viewing, I can see the Bold and Beautiful plot pattern. It’s simple. So simple it only has two points.

1. Something big happens. Steffy wakes from her coma. Eric is boinking Donna. Sheila is arrested.

2. Characters spend every following episode rehashing the latest big moment. Repeat dialogue until the next big moment happens and starts the cycle over again.

Soaps are nothing without the juicy details. The little bits and pieces are what makes me understand what’s happening and makes me care about the characters and the story.

Having 19 minutes a day to tell a story is the writer’s opportunity to get into the nitty gritty of a story. If you’re not getting into the details of a story and exploring all of the drama, are you writing a soap opera?

How did Sheila escape from jail? She just did.

How did Sheila find Li? She just did.

Why did Li forgive Sheila after all this time? She just did.

Lean into the drama!

Life-changing moments are what makes us care about the characters we love and shouldn’t be brushed aside with a throw-away line.

For instance, Deacon was questioned by police about his relationship with his bestie Sheila—off camera. What?

Bold and Beautiful Rants and Raves

Off-camera is where things that are not important and not entertaining should be happening.

Deacon the ex-con being threatened with a possible return to jail by police about his involvement with Sheila would be great television.

Brooke, Bridget and Hope would fret and fight over who thinks he’s innocent and who thinks this is just bad ol’ Deacon. He could lose his job and get kicked out of his place, leading him to have to stay with Bridget, who still thinks her former husband might have changed his ways. Cue the love theme.

Mother and daughter at odds over the man they’ve been arguing about for decades = soap opera gold. Deacon’s interrogation and the aftermath should have been at least an episode, not a throw away mention.

Lock the door on your way out!

I happen to know a prison guard and they’ve assured me that escape is not easy, especially from a big place like Los Angeles county lock-up.

You can’t just run out the back door or jump in a laundry bin. There are many layers of security checks to ensure that prisoners stay behind bars.

Sheila’s jail break could have been an entire week of tense, dramatic episodes as she and Mike navigate the security system. Mike has always been infatuated with Sheila and would probably sacrifice himself for her freedom.

The choice to make the action all happen off-screen is a major storytelling blunder. I feel cheated as a B&B fan.

Sheila being Sheila is the only thing that makes sense.

Sheila still being self-centered and playing the victim is strangely the only thing that’s making sense to me right now. The nutty nurse has been playing the same tune for decades. She’s nothing if not driven.

Her confrontation with Li was chilling and tense but why did Sheila whack Li over the head? I guess it was time for Li to learn the most important B&B lesson of all: never turn your back on Sheila Carter. Or just look through the peephole before answering the door.

Li’s change of heart towards Sheila is really… something. Sheila has been saying the same “he’s my son” thing for weeks and now Li believes her? Maybe Li has a concussion. Oh well, she can probably cure that at home, too.

Despite my many complaints about this story, Li and Sheila are so incredibly good together. That’s almost entirely due to the actors’ performances. I almost don’t care about the plot holes that make it possible. Almost.

What should happen next? Li and Sheila make an unholy alliance to keep Finn alive and away from the Forresters. Which will go terribly wrong for maximum dramatic potential.

Quinn was never the Stepford Wife she’s now portrayed as. She was an outsider and a fighter and resorted to some despicable deeds to get what she wanted. Quinn pushed Deacon off a damn cliff!

Watering down strong female characters and ignoring show history is nothing new on B&B, but it still irks me every time they pull this.

If you have to change a character’s entire personality for a story, is it a story worth telling?

The way Eric keeps lying to his justifiably concerned wife and now his own daughter makes it impossible for me to be on his side at all. Yes, Quinn cheated on Eric — but she ended the affair and chose to stay with her husband when she could have walked away.

Now, Quinn and Bridget are worried about Eric’s health and he’s acting like it’s an invasion of privacy. That should have made Bridget have a light-bulb moment and wonder what her father is up to.

Bridget knows all about men being dogs, so her being the one to find daddy and aunt Donna together would have been soap opera gold.

Meanwhile, Donna is still happy with the way things are because this story is strictly an #oldmanfantasy. “It’s nothing sordid,” says the woman who just screwed a married man in a hotel room.

I agree with Donna. “Affair” is not an accurate description. “Booty calls” would be accurate.

What should happen next? I’m all for Donna coming to her senses and realizing that being an Early Bird Special is not what she wants. But then there would be no reason for Donna to spend an entire episode in lingerie, and that seems to be the story focus.

I’ve got a few notes to share for characters in need of some home truths. I think you’ll probably agree.

Paris: If a man wants to marry you after just a few days of dating, something’s up and it’s not good. My first guess would be that he’s gay, but I don’t think that’s the case with Carter (as much as some of us may be wishing for that).

Hope: I laughed when you told your stepgrandpa/stepfather that marriage should be respected. Look at your parents! You are Brooke Logan’s daughter so put a little more effort into understand the ways of the world. Also, stop wearing Halloween costumes as fashion.

Eric: You’ve been cheating on your wives since at least 1987, so why are you still so bad at it? Have you learned nothing in four decades of adultery? Stop while you still have time.

Ridge: You seem more upset about Carter marrying a woman than you are about your own wife, your own daughter or just about anything. Is there something you want to tell us?

What do you think? Are Sheila and Li frenemies for life? Will the real Quinn come roaring back? Are story details still important to you? Like and comment below, then follow me on Twitter @mattFarris. If you missed out on my previous weeks’ opinions, check out the B&B opinion section!