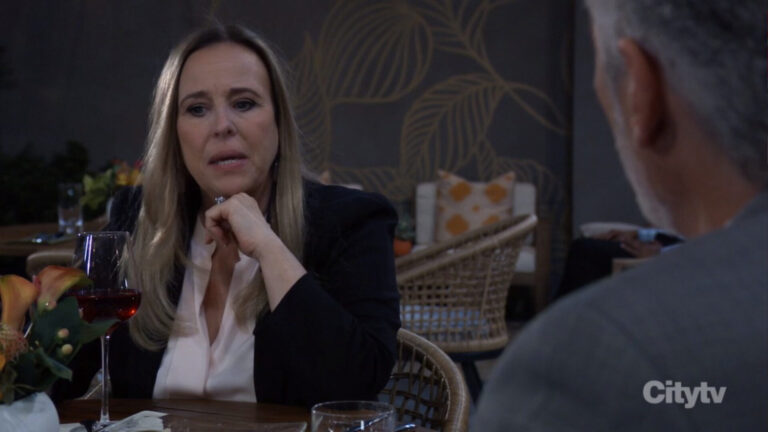 General Hospital recap for Monday, June 20, 2022. In today’s GH episode, Spencer tells Victor his plans for Esme, Felicia tells Mac about trashing Ryan, Esme asks Kevin for his help, and Trina’s parents are proud of her.

We also have Friday’s GH recap where Drew asked Carly skinny-dipping and Chase was arrested for attacking Linc.

Esme stops by Kevin’s office and tells him she needs his insight. She’s been accepted to PCU for the fall. Psychology is her passion. She wants him to help her with her case study to apply to the program. Her study is on Ryan.

The doctor doesn’t want to help. He’s already barred her from seeing his brother. She accuses him of making his personal. Kevin tells her to find a different topic.

Esme claims she only has one question, whether Ryan has ever formed a sincere bond to another person. She wonders if his detachment is hereditary. The doctor asks if that question is personal.

She concedes it. Clearly she has problems with personal relationships. He says she’s not a narcissistic sociopath like his brother. Ryan needs other people to have a sense of self. That’s why he manipulates people.

Mac and Felicia run into Laura and Martin at The Grill. The mayor invites them to sit but they’re having a date night. Once the wander off, Martin and Laura discuss Cyrus not being behind the attempt on their lives.

She assumes that Victor must have been responsible. Martin’s offended she thinks he would have just been collateral damage. She’s sure that the Cassadine also had a hand in Luke’s death.

He wonders how long she’s suspected that. She doesn’t buy the WSB’s take on the case. It wreaks of Victor. Her brother begs her to be careful. She assures him she’s not going anywhere… but Victor is. She thinks she can have him deported.

Felicia wants champagne. They talk about their granddaughter. She thinks they should be happy to accept being grandparents is good enough. She also wants to toast to dressing down Ryan today. “You did what?” he asks.

She assures him that Ryan’s days of abductions and murders are over. Mac still worries. Felicia really needed to gloat about winning to him. Today she finally got to tell him how she sees him. That was liberating.

They head across the room to join Kevin and Laura and fill them in on her run-in with Ryan. They all agree that Chamberlain is a monster but not dangerous. He can only be dangerous one letter at a time.

Kevin is disturbed when she explains that Esme was helping him to communicate. He immediately takes off. Felicia is confused.

Alexis calls Laura warns her that something catastrophic is going to happen tomorrow and there is nothing she can do to stop it.

Victor strolls into Kelly’s and wonders why Spencer is still doing labor when he has his trust fund back. It’s Spencer’s last shift. He’s eager to focus on something close to home.

They chat about where he’s living now and Victor applauds when he hears he’s moved back to Wyndemere. It looks like his birthright and relationship with his father could be restored.

He’s surprised to learn that Ava agreed to let Esme live there too. Victor wonders if her continued presence could hinder his reconciliation with Nikolas. Spencer points out that he and Laura are on the same page about that.

They talk about Esme’s unreliability. Spencer hopes everyone will soon see her as the person she truly is. He’s planning to locate her birth parents. He’s sure she would give everything to know who they are.

Victor offers to reach out to his contact to try and dig up her origins. She arrives. Victor immediately exits, bumping into Kevin outside. Once the Cassadine walks off, she strides out.

Kevin tells her he warned her to stay away from Ryan. He adds that he has ended her internship at Spring Ridge and had her barred.

When Trina gets home, she finds her mom waiting for her with Curtis and Taggert. They run over and hug her, announcing they will march down to the school to fight their decision.

She appreciates all the support but she’s okay. She thinks things could work out in her favor. She explains that she and Joss came up with an angle the cops didn’t and chased after it.

Taggert doesn’t like the sound of that. His daughter explains she and her friend went to a biker bar and got confirmation that Esme bought a phone from her but the place was raided by the cops after a fight broke out.

“I didn’t get detained!” she insists. Her parents are not happy. She insists she got a lead that could exonerate her. Her mom says she should have come to them, but she’s not disappointed she found a lead.

Taggert is proud but disappointed. Portia thinks they should be proud their daughter has helped herself. He may be scared but he is proud. Portia offers to order pizza.

As she and Taggert go to the kitchen to get snacks, Trina admits that tonight could have gone south. It’s not his place to offer an opinion, but what she did is what he would have done. “You’ve got guts,” he says.

Once her parents return, they chat about how they can use her lead.

At the drive-in, Anna wonders if Valentin is probing her for information. He pretends to be nervous. They aren’t facing danger. He’s just worried about disappointing her and tells her Felicia gave him a beat down for avoiding her. Anna says she was right.

Valentin claims he’s had a lot on his plate and it has nothing to do with her. He assures his intentions are serious and they kiss. As they make out, he asks if she wants to skip the second feature.

When he offers to do anything she wants, she asks, “Anything?” She asks for popcorn. After he returns with it, she says he got a text but she didn’t check it. He stares. Anna asks if he has another woman stashed somewhere.

He makes light of that and checks his text, saying it was from Martin. Valentin asks her for a second date. She agrees. Casablanca comes up on the screen. She gives him a worried look.