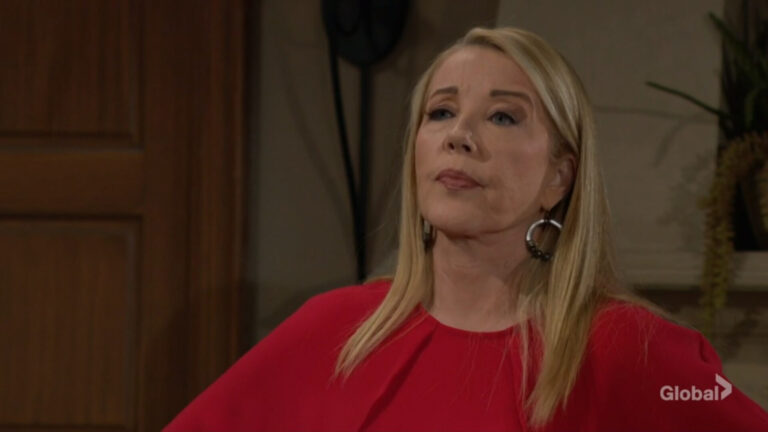 In this episode of CBS’ The Young and the Restless, Nikki’s opinions get her in trouble, Billy has a warning for Phyllis and a tip. In the previous episode, Nick confided in Sharon, and Victoria let Nikki know what Victor did to Locke’s body.

Abby arrives at the ranch to see Victoria but Nikki says he’s at the ranch. She’s been busy at Newman but assures that she’s being strong over this ordeal. Abby calls her the strongest person she knows. Nikki doubts many tears will be shed over Locke.

Abby wishes Chance wasn’t so determined to investigate. Nikki smiles. In so many words, she thinks Chance should back off the case.

At the office, Elena finds Devon on a call with Amanda about her mother. He disconnects and she has a personal question about Nate.

She feels bad that they’re at each other’s throats and wonders what she can do. She feels responsible. He tells her they’re fine but at work, there are issues since he was thrown into a big job. Elena thinks Devon should treat her boyfriend better and asks if he put up defences when it comes to Nate.

Devon says he hasn’t and says Nate’s reluctant to embrace the hierarchy at work. It makes him think he made a mistake in hiring him.

Imani meets Nate at Crimson Lights. She tells him she’s an emotional mess and is waiting to take her flight to see her mama tonight. Nate invites her to sit and relax. She’s glad to since he always makes her feel better.

Nate reminds her she’ll have Amanda with her. Nate tells her that Devon’s worried he’s a liability at work.

He wants to get him a mentor. “A mentor?!” She gawks. She thinks Devon needs to give him more time to prove himself.

She thinks Devon could be threatened by him. Nate’s grateful for her words but he wonders if he overstepped a few times. It was about enthusiasm, though. She thinks Devon needs to be the one always in control.

Imani urges him to turn up the heat but he doesn’t want to create conflict. She still says he needs to do something bold.

Diane spots Summer inside and they discuss her working with Phyllis. Diane thinks her mom’s career move is tied to hating her. Summer explains that she hired her mother with the same agreement as Diane’s. Talk turns to Phyllis and Jack someday forgiving her.

Summer’s not sure that’s in the cards.

She warns Diane not to manipulate Jack. If she does, “You’ll have me to contend  with.”

Kyle meets Tessa and Mariah at Dive Bar and likes the automated text to voice app she uses to say hello from her phone. Mariah finds it sexy and Tessa  laughs.

He updates them about working with Harrison to get through his other father’s death and his concerns about Phyllis and Diane working together.

Tessa goes to get their drink order while Mariah asks for a favor.

She’s worried about Tessa missing her tour, though she’s putting up a front. They agree her being quiet has to be difficult on her.

They worry about her voice long term. Kyle offers an outfit from Marchetti but Mariah would like her to have a job. Doesn’t he need models? He does and likes the idea. He’ll talk to her. They agree not to get her hopes up just yet.

She returns with drinks and notices they’re quiet. She questions them. They lie that they were discussing the “awesome weather.” Summer turns up and the ladies leave. Summer tells him about her conversation with his mother.

He rolls his eyes and she wonders if they’re asking for trouble, letting their mothers work together.

They argue. Jack says his tenure at Newman was devoid of scandal. Billy argues that he has an axe to grind. Jack thinks he trusts that he can treat him fairly. Billy asks how Ashley will feel. Eventually, Jack thinks she’ll feel fine with it.

She’s in Paris often anyway. Billy says, “Give him an inch and he will take the company.”

They discuss how some people deserve another chance and some don’t, when Phyllis pokes her head in.

Jack gets up to go and Phyllis wants to discuss Lily’s offer to sell Grand Phoenix.

Once Jack’s gone, Phyllis tells Billy about her new job at Marchetti. “What? You and Diane working together?” He says, almost choking. He thinks she’ll combust at some point. She asks why he can turn his life around but she can’t.

He says he likes, trusts  and admires his colleagues. Phyllis counters that she’ll handle Diane professionally.

“And I’m going to enjoy the popcorn while you’re doing that.” She tells him it’s not like some… podcast. He defends his podcast.

She tells him Marchetti’s a business, not a side hustle. Billy assumes she has a plan for Diane. Phyllis denies it. He doesn’t see why she’d sell her prized position to work for someone else. She claims her gig is overseeing an entire division. She’s risen above her hatred of Diane, after it cost her from being happy with Jack.

She stares off, thinking and Billy even more thinks she’s got something up her sleeve and urges her to let it go. Even if she wins, she’ll still lose in the end. There’s always collateral damage in war.

He worries it’ll be Summer. She assures that’ll never happen.

He tells her the powers at Jabot are shifting, that Jack offered Adam a job as co-CEO with Kyle. Phyllis is stricken. “It’s unbelievable.” She says Adam gets chances to redeem himself in Jack’s eyes before her.

Her anger dissipates when Nikki calls asking for a meeting.

At the bar, Devon meets Abby. They discuss the baby and then Chance working hard on the case about Locke.

She thinks Chance is keeping something from her about it because her family is involved. Talk turns to her work and how instrumental he’s been to that and Dominic.

Phyllis arrives at the ranch. Ashley’s out of town on business, Nikki says, which worries Phyllis. Nikki knows that Ashley’s still all in.

She asks about the details of her next move. Phyllis asks if that means she doesn’t trust her. “Well, in a word…no,” Nikki says.

She worries Phyllis will back down at the last minute to protect Summer.

They need to get Diane out of town for good.

Phyllis agrees and doesn’t appreciate her back handed compliment. She’s the only one actually doing something here. She asks Nikki to keep her opinions to herself.

Jack finds Diane at Crimson Lights. She tosses her hair when she sees him and plasters a smile on her face. He thanks her again for the books on grief for Harrison.

They’re working. He’s seeing parallels with the one about the bears. He thanks her again for a thoughtful gift and goes.