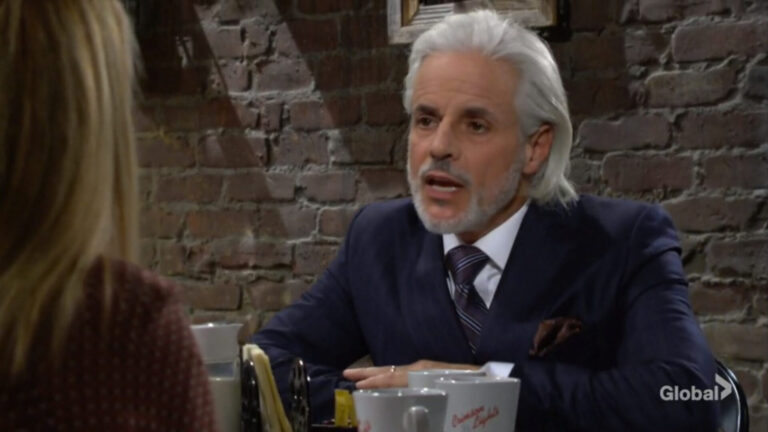 In this episode of CBS’ The Young and the Restless, Billy opens up to Jill, Imani offers Nate her support, and Summer tries to put together a team to keep the peace. In the previous episode, Traci and Ashley recalled their history when they took Allie out for lunch.

Billy meets his mother at Society for breakfast. She wonders why he is so disgruntled. He admits he got some bad news form Victoria. His ex is leaving town to start over with Locke.

No one told Jill anything about what Ashland did so Billy has to recap the story. She’s appalled. He worries about where Victoria is planning to take their kids since she’s not telling him anything.

Jill shrugs it off, “C’est la vie.” Victoria can do as she likes. He thinks he should be concerned given that this involves his kids. She refuses to accept Victoria would do anything to put her kids in danger.

If he uses this to mess things up with Lily, she will never forgive him. He’s surprised she’s being so unsuppportive.

His mom asks him how he feels about all the changes at the company. He reminds her it’s the end of her era at Chancellor. She suspects he finds this disconcerting. Billy admires everything Lily has done and he is focused on being the best COO he can be.

Jill can still see he’s upset. Her son will only open up if she agrees to keep it quiet. It’s beautiful for him to watch Lily vibing with her family, but he feels about restless, like there is something big out there for him.

All of this sounds familiar. His mom worries that he is self-sabotaging. If he fails, he gives himself permission to go back to his old ways. He’s not planning to go back to being the Abbott family screw-up.

She understands that. She’s been listening to his podcast and thinks he’s very brave. It does make her worry that he’s ripping scabs off old wounds. Her son assures her it is cathartic. He’s determined to search until he learns why he feels restless.

Devon and Nate stop by Lily’s office. They congratulate themselves on how well everything went last night. Her brother hates to put a damper on the day but there is a problem…he’s only teasing her.

They talk about how great their offices are. Nate can’t wait to stock his with fancy snacks. Imani strolls in and tells them how much the gossip sites are going on about the “sexy” aspects of their launch. Devon looks uncomfortable.

Nate apologizes if he stepped on anyone’s toes. Devon says he did but it’s just a bump in the road and hopefully there won’t be more of those. Nate thanks him for being so gracious. They all sit down and discuss advertising rates. Lily compliments everyone on their great teamwork.

Imani follows Nate into Crimson Lights. She tells him how good his going big at the launch was. He generated a lot of buzz and that was worth the risk. He’s pretty sure Devon thinks otherwise.

She hopes he won’t let Devon discourage him. Nate claims they just have some healthy competition. Imani wants them to look out for each other and not let other people hold them back.

Billy drops by the office and chats with Lily about his talk with his mom. She’s made it clear he better not screw it up with her favorite star CEO. Before he can explain, she gets a call and has to go. He tells her to make them proud.

Summer bumps into Amanda at the Grand Phoenix. She worries about Phyllis going missing. She’s being vague and evasive with everyone. It’s weird.

Amanda wonders if they should be worried. Summer already is. As they sit down, they wonder what could be going on with Phyllis and how Diane might be involved.

Summer admits she pushed Daniel to invite their mom to his place to avoid a fight with Diane. Amanda thinks that was a good idea. She doesn’t know how to help but will corner her when she gets back.

Summer wants to put together a team to save her mom from herself. The lawyer would be happy to take part.

Diane and Kyle are in the park as Harrison plays. She tells him that she had a bad night of sleep because of her dreams. She dreamed that he moved back to Milan. He assures her that won’t happen.

His mother asks him for a big favor: she needs a job. She appreciates all his help but needs to pay her own way. Plus, she needs a career and a purpose, like when she was an architect. She can’t go back to that because she hasn’t kept up with how the field has changed.

He’s sure it must be hard to give up on a dream you once had. Diane has decided she wants to work in PR. She took courses on it in LA. It’s all about re-branding and turning around a bad image and that’s something she’s sure she can excel at.

Her son agrees to give where she could work some thought. Diane knows she is still a pariah, but she is determined to make Harrison proud of his DiDi.

Michael and Lauren are on the Crimson Lights patio canoodling until Nikki stumbles over in a daze. Lauren is sure she must be devastated by Victoria’s departure.

Nikki tells the lawyer she wants to channel all her rage and frustration at Diane and he’s just the person to help her do it. She asks him to dig into what Diane was doing in LA so they can learn her evil intentions.

Lauren informs Nikki that her husband is one of the few people who isn’t horrified that Diane is back. The Newman cringes to learn he’s been palling around with her. After Lauren takes off for work.

Nikki orders Michael to do something about Diane and quickly. He doesn’t know how he can help, she wants him to investigate. Maybe they can get her on fraud or tax evasion?

The lawyer reminds her that he has no standing to bring charges against her. “Why the hell are you protecting Diane?” she demands. He thinks she’s paid for her crimes. Nikki disagrees. She refuses to sit back and let her wreak havoc.

With some prodding, he agrees to do a deep dive into Diane’s time away, if only to prove she’s changed. She wonders if he’ll try to cover it up if he learns anything incriminating.

Lauren meets with Summer and Amanda at the Phoenix. They are worried about the situation with Phyllis and Diane. Lauren thinks that’s a lost cause. Summer wants them to team up and try to keep the peace.

The Fenmore thinks that’s going to take a lot of work. Diane has been lighting fires everywhere she goes. Amanda thinks they could luck out and Diane could take off thanks to all the heat.

Lauren admires Summer for thinking of her husband’s emotions. She does think the town would be better off without Diane in it and that means Summer may have to take a side.

When Summer returns to the Abbott estate, Kyle notices she seems bummed. She tells him she’s worried about their moms. Nikki is after Diane now. He doesn’t want her getting in the middle of this and wishes everyone would back off.

Cornering Chelsea and Chloe at Society, Gloria observes they and in a crisis and must need a spiritual guru. They’re lucky that they’ve run into her

Nick asks to speak to his father alone.

Imani tells Amanda that she just got off the phone with her father. “It’s his mom,” she sobs.

Tuesday’s Y&R recap: Phyllis returns to Genoa City in disguise and eavesdrops on Jack and Diane