Home » Young and Restless » Y&R Opinion: Saying No to Turtlenecks, Surrogacy Stories — & Lovers With No Chemistry

Y&R Opinion: Saying No to Turtlenecks, Surrogacy Stories — & Lovers With No Chemistry 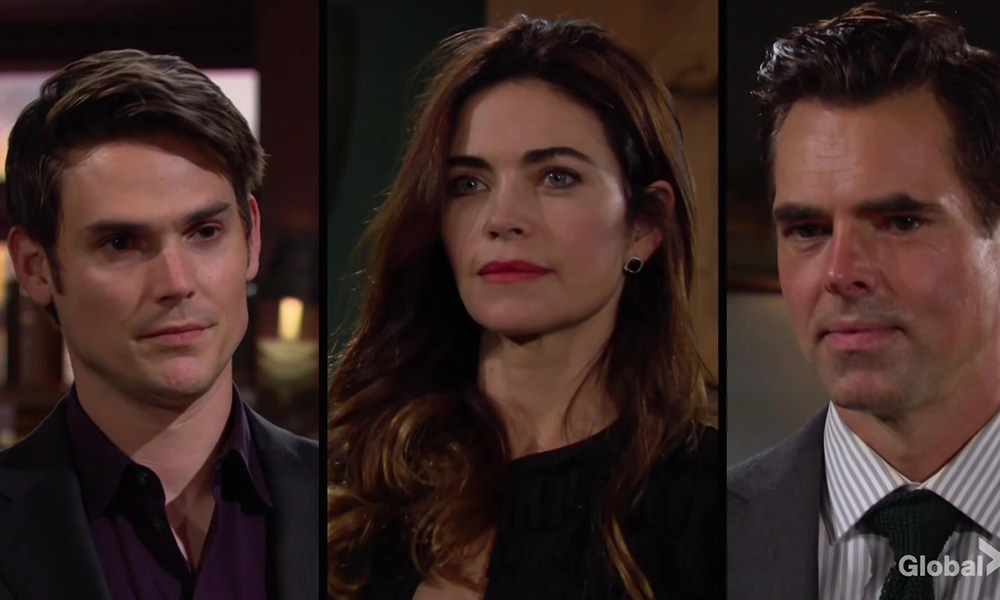 I just started watching Young and Restless after several months on hiatus. (Since last August.) I’m writing Y&R Day Ahead daily recaps, going in blind, and relying on my mum and my Twitter followers to help me out (Follow me and help me!). I’m missing several bits and pieces of the story. So please bear with me as I write my opinion on this week. A few things have always come to mind when I think about Y&R. It’s very elegant. Some of the sets are gorgeous, some are so outdated that I think they’ve been around since before I was born. Most of the outfits are beautiful, most players are super-wealthy. The acting is excellent. Though…some of the characters tend to take themselves very seriously like they’re auditioning to be in a Grey Poupon commercial. There seems to be a shortage of characters with chemistry, and the show is very low energy and uber-conservative. I can generally find something likable in any character but even my faves aren’t safe from mocking…

The big news this week is that Doug Davidson is complaining that the show is treating him like a Day Player. And they are. Davidson’s a sweet guy. I’ve met him and interviewed him on the red carpet at the Daytime Emmys a few years ago. He’s talented, and Paul Williams is an interesting character. But obviously, the show doesn’t write for actors because they’ve got longevity. If he’s not on contract and wants to work more, and it’s not going to happen at Y&R, I think he should consider finding additional work elsewhere. He’s talented and his fans would love to see him on another show or in a movie. I wish him all the best, but I don’t think this is the end for him at Y&R. This isn’t the first time that the show has backburnered his character. My motto: If you don’t like the status quo, change it.

I’m coming in very late to the game with this story so I don’t know fully what the heck is going on. I do know that the actor who played Chance has been fired from the show and Donny Boaz says that he’s not being recast or killed off. I’m not sure why they decided to go ahead with the surrogacy storyline. Abby’s not that interesting of a character to be carrying any story, and frankly, our Devon’s got his hands full of the bevies of babes he’s sleeping with to worry about donating sperm to Abby. You know nothing good will come of this. Devon deserves better. And so does Amanda!

Billy Miller really left his mark on Y&R. He’s been gone since 2014 and people are still commenting that they’re not used to Jason Thompson’s Billy. This is what some of us see when we look at Billy.

I look at his Billy and all I see is a young Jimmy Stewart high on helium. pic.twitter.com/VnBiBz0vJy

That reminds me. I really wish I did but sadly, I do not see any chemistry between Lily and Billy. I like that they keep things light and that all they do is have sex, whether it be in the bathroom or the shower, and that they talk about it a lot, but they could be in bed together naked and I still wouldn’t see the chemistry. I polled people on Twitter for a few days. For 153 votes, 67% said that this couple is “Boring AF.” I need a couple other than Nikki and Victor to root for!

I’m not really up on what’s going on in Adam and Chelsea’s relationship but I can’t stand that he never kisses her hello or goodbye. Right off the bat, I want her to leave him based on that! His mind isn’t on her to the point where he stood beside her and didn’t even notice that she was standing up! And then there’s the constant lying. Every time Sharon calls he’s like “Yep, be right over,” and then lies to Chelsea about who called. Chelsea needs to leave him but I’m with Chloe. Just leave. Revenge on Adam never works out the way anyone wants it to.

I need to know what was in the bag Chelsea gave Chloe. I joked on Twitter that it must have been Sharon’s figurine and the tray, and now I realize that’s probably it! Chelsea is likely using Sharon to screw Adam over. I even wondered if Rey’s illness has something to do with Chelsea.

One good thing to come from this vengeance plot is that Chelsea’s motivated to speak and move after the stroke. Could she be the one texting poor dumb Faith, too? Yes, I said what I said. A kid Faith’s age doesn’t know not to text strangers? Dumb. Someone on Twitter suggested maybe nobody’s texting her and that Sharon’s right. That she has Bipolar Disorder. Maybe she’s hallucinating. If not that then I shudder to think it’s some rando guy texting who will lure her into something horrid. I just can’t see the show going in that direction. That might be wishful thinking on my part.

Sharon’s supposed to be a psychologist which I find laughable since she barely knows her own self and acted so petulant in therapy. Don’t get me wrong. I like Sharon. I just find it stupid that she doesn’t realize she’s in love with Adam. At least, that’s what it looks like to me! She and poor sad sack Rey, who deserves better, are still newlyweds and they’re already in need of therapy. Ouch. I was glad to at least see the therapy, which was quite amusing. Iris was good.

I’ve no issue whatsoever with an older man dating a younger woman. What I do have a problem with is two soap characters with no obvious chemistry sharing screen time. Jack and Sally have nothing in common, and when they’re in scenes, their discussions come across as a handsome kindly grandfatherly type talking with his hottie niece. Make this end. Nobody wants to see this. Those who do have a problem with the age difference are throwing up all over the place like in this Family Guy cutaway on YouTube.

If the show really wanted their audience to be interested, they’d pair an older woman with a younger man, since the audience is comprised of older women. We all know this show is written by older men. My advice is to stop writing your male fantasies and start writing the fantasies that appeal to the majority who are watching. Women.

I was looking forward to Richard Burgi’s arrival to Genoa City, having enjoyed him on other soaps. He didn’t disappoint. First, he thought that Kyle worked at the Grand Phoenix, which was pretty funny. Then, instead of requesting a board room, he did business in his hotel suite, beside his bed. So strange and inappropriate! I want to believe he did it on purpose to throw everyone off because he seems the type.

Ashland commented on Billy’s gambling and Adam’s many crimes, and when he invited Victoria into his suite, we all waited with bated breath to find out what he’d say to her and he…complimented her on her looks. Ew. At least she had a sassy response, as my friend Jennifer said on Twitter. I’m going to enjoy getting to know him better, and Tara, his wife. But a woman shouldn’t have to be hit on during a business meeting. Though sure, I saw the chemistry, I don’t want Victoria getting his company (I’m rooting for her) because he finds her sexy.

Also, did he have to make a remark on Victoria’s looks? 🙄. I liked her sassy response though.

OMG someone DMd me (didn’t want to be named) and told me the correct spelling of Locke’s company is “Cyaxeres.” Why did I ask? Why is it even called that?! 🤣 #WhoMadeThatUp #YR pic.twitter.com/5dsRCBmrBU

They had Kyle and Ashland in turtlenecks this week. My thoughts are pretty basic. No. Just no.  And while I have a photo of these two up, can I just say how stupid it is that when Summer suggested Kyle get a DNA test for Harrison that he refused because “I believe her [Tara] because I saw her face and I don’t know why she’d lie.” Bro. Kyle doesn’t know he’s in a soap opera but even so, that’s stupid.

Nikki tells Victor, “I don’t approve of how you’re pitting your children against each other. ”
Victor, “Well, baby, I don’t care,” he says. “I haven’t gotten to where I have by being nice.”