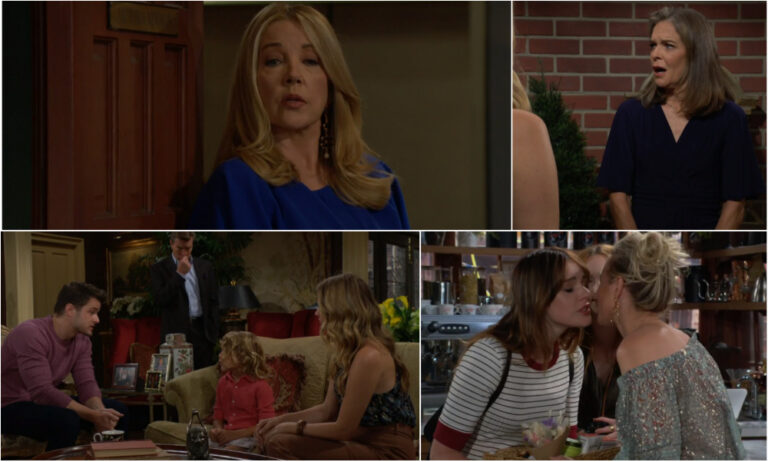 In this episode of CBS’ The Young and the Restless, Tessa and Mariah try to stay calm on the day of Tessa’s throat surgery, while Diane helps tell Harrison that his dad’s not coming home, and Nick still has suspicions about what happened to Ashland.

In the previous episode, Victor and Michael spin a tale about Ashland’s death, and Nick and Chloe talked Sally out of quitting Newman Media.

At the Abbott manse, Kyle tells Jack that he and Summer were up all night wondering how to tell Harrison that his father was dead.

Kyle knows how excruciating it has to be since he went through that himself, with no goodbye. Jack comforts his son.

He knows what it’s like to tell his son the same thing, referring to Diane’s faked death. Summer watches nearby and then appears and tells them they need to tell Harrison the truth now. It’ll be all over soon.

Jack goes to be with the kid while they prepare. Kyle is triggered by this mess.

Jack brings Harrison downstairs. They tell Harrison that accidents happen and remind him of a movie they saw where someone’s dad wasn’t able to be around.

Diane arrives and Jack tries to tell her to go. The timing is bad. Harrison hears her voice and calls out, “Didi!”

She heads inside and hears Kyle talking to Harrison. She tears up and Summer takes her outside to fill her in on Ashland’s death. Diane is rocked.

Summer thinks she should go since it’s bringing up bad memories of when she disappeared.

Diane asks to help. Summer lets her in and she tries to help soothe the child by talking about how Ashland said how much he loved Harrison.

She tears up as she says sometimes things happen and plans change.

That doesn’t mean Father didn’t love him. If he could be here, he would be.

She gets him to show her where his heart is. Kyle says that’s where Father is. They allow Didi to take Harrison outside for a walk and Kyle figures this is the time to tell him that she’s his grandma, just like Jack is his dad and Harrison’s grandfather.

Kyle knows Didi loves him so much and they’re happy she’s there to help them on their day. Harrison hugs Didi at her request while Jack looks worried.

Adam strolls into Crimson Lights for coffee and espresso. He asks what she’s doing. Tessa’s having a minor procedure done so she’s put together a care package. “That sounds nice,” he says and takes a call.

He thanks the caller for booking a seat on a flight for him.

He disconnects and Sharon admits she had a talk with Sally.

He asks why. Sharon says she confided in her again, confused about the two different reasons why he broke up with her. He tries to get into it but Sharon’s disinterested.

She thinks Sally accepts him and loves him, flaws and all. “Yeah well she’d be better off if she didn’t. She’d be better hating me.”

If anyone from Newman saw the spectacle she made, her days would be numbered. Sharon agrees.

He thinks her priorities are out of whack. “That isn’t for you to decide,” she says. He won’t let her lose her real priorities since his are destined to crash and burn.

Maybe she’s the one meant to be with him. Adam takes a slug of the coffee. He doesn’t need to be with anyone right now. Sharon disagrees, which is why she tried to convince Sally not to give up on him.

Adam admits, “I have, I mean I had feelings for Sally.” Sharon says he’s not fooling her. He calls it complicated and she urges him not to take it for granted.

Adam needs a break and is going to Vegas. That concerns his ex.

At Newman Enterprises, Chance talks to Nick once more about Victoria bolting.

Chance needed to see more information about Ashland’s state of mind. Nick says they told him everything.

Chance asks if he was suicidal. Nick doesn’t know. He was homicidal. “I didn’t even know he could breathe, let alone drive a car.” Chance pounces on that.

That’s his point. He doesn’t get it. Nikki appears and eavesdrops on Chance and Nick as Nick shrugs. That’s all he knows.

Nikki approaches and is glad Chance was able to track Ashland down so fast. Chance goes and Nick still blames himself.

Mariah tells her it’s a day off and she’ll be waited on hand and foot.

Tessa is afraid to reveal her true concerns aloud. She finally admits that she knows ac accidents happen. What of the chords are worse than they know?

What if she loses her one true talent and her career is over? Mariah gives her a pep talk. She’s going to be fine. She kisses her wife.

Tessa and Mariah arrive at Crimson Lights. Adam wishes Tessa well on her surgery today and takes off.

Sharon wants to give Tessa something to drink, but knows she can’t have anything before surgery. Tessa would kill for a mocha.

She cuddles Mariah and calls her a soothing presence. Sharon gifts Tessa the care package for when she comes home from the hospital and Tessa is overcome.

She feels lucky to have such a mother-in-law who feels like a mom.

Sharon’s so touched. She doesn’t think anyone’s made her feel so good. She goes to get her things and Mariah admits to her mom she’s truly worried.

She can’t bear the thought of Tessa being in pain. Sharon hugs her daughter and Tessa returns, ready to go.

At the park, Nikki thinks Nick saved his sister’s life. Nick explains what happened and Nikki tells him he doesn’t need to retell it.

She knows. She remembers thinking she killed JT. She talks Nick down, reminding him that he got up after he fell and drove off. It’s not Nick’s fault he died in a car accident.

Nick drops by Crimson Lights. They discuss Tessa’s surgery. He’s planning on sending flowers later. Sharon pours him some coffee and he asks to talk to her about something. He reveals Ashland is dead. Sharon’s surprised. They discuss what happened.

Nick doesn’t get how Locke got up and walked away. Sharon reminds him of JT. Nikki thought she killed JT. It’s the same thing but that’s where the similarities end. Still, Nick doesn’t believe it. He didn’t have a pulse.

There’s a whole part of the sequence that doesn’t sit right. His dad showed up right after. When his dad is involved, things tend to get complicated. Nick can’t trust his dad to tell the truth.

In the park, Adam comes across Chance, who tells him the news about Ashland. Before Chance can explain that something about the case doesn’t fit, he alludes to it and then gets a call and dashes off to work.

Adam calls someone named Paul to cancel his flight to Vegas.

Monday’s Y&R recap: Phyllis and Jack have a bitter fight