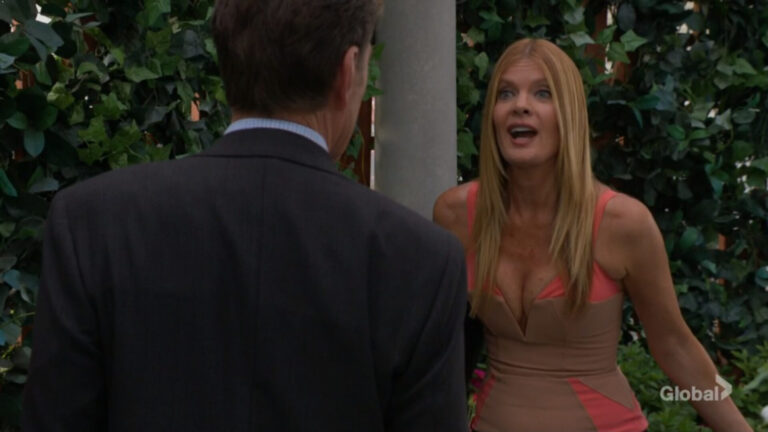 In this episode of CBS’ The Young and the Restless, Elena returns and pulls Nate into bed, Nate gets into another fight with Devon, and Kyle tells Mariah how far things have come with Diane.

In the previous episode, Tessa worried about surgery, and Nikki eavesdropped on Chance asking Nick is Ashland was suicidal.

At the Abbott estate, Diane and Jack chat about Harrison is coping with losing Ashland. He thinks it’s a good thing she arrives when he did.

He’d forgotten how good she is at communicating with children. Diane could see that Harrison had a genuine bond with Locke. Jack agrees.

He’s kind of glad that Ashland defied the restraining order and spent a few moments with the kid. She invites him to join them in the park but he has to go to work.

Summer meets with her mother in the park. They talk about her breaking the news of Locke’s death to Harrison.

The topic quickly turns to Jack. Phyllis is sure they will work things out eventually. They gravitate to each other and she always gets his take on everything.

Summer is sure all her support has meant a lot to him. Her mom isn’t so sure. Since Diane got back, he’s always angry.

They blurted out their feelings, admitting that they love each other. Summer wonders if that could lead to more. Her mom explains it was more like Jack was angry to admit he loves her. It hurts him.

“No one gets it! I hurt too!” she says. They both want to see him happy and Phyllis is sure he could be happy with her.

Diane interrupts. Phyllis tries to get rid of her. Jenkins brings up what happened to Ashland and adds that Kyle told Harrison that Diane is his grandmother.

Phyllis is not impressed and asks Diane how low can she go, using a child’s heartbreak to worm her way into the family. She can’t believe her heart is breaking for this little boy when she doesn’t have one.

They start screaming at each other about what happened to Kyle. “I helped him deal with your lies!” Phyllis shouts.

Jack runs out between them and points out that Harrison is just feet away playing on the swings. He could have heard what they have been saying.

Diane confirms that Phyllis didn’t know Harrison was there.

She walks off to look after the kid while Summer insists that the child didn’t notice anything. Phyllis goes back to complaining about how disgusting Diane is.

When Summer leaves them alone, Jack says, “It just doesn’t end with you, does it?”

Phyllis can’t handle it anymore. Jack knows it’s hard for all of them having Diane back.

Red wishes he would put his foot down and make it clear to Diane where they stand.

He claims to love her but won’t go to the limit for her. “You just keep on putting up a wall and shutting me out!” she complains.

Jack points out that today should be about Harrison.

She still can’t wrap her head around him forgiving Diane for everything while not giving her the benefit of the doubt.

Jack says he’s not giving Diane a pass and will never trust her… but, even though Phyllis fascinates him and makes his heart beat faster, and no matter how much he loves her, the stakes are too high and he can’t let his family get caught in the crossfire of her feud.

On the roof of the GCAC, Amanda notices that Devon is ordering the whole menu. Most of it is for her, he says.

They chat about her spending so much time with her mom. He’s determined to get her all the curly fries she can eat.

He can see that something is weighing on her. She’s not sure she should have left but her sister showed up and insists she had everything under control.

Amanda admits she’s a bit torn but doesn’t sense that her mother and sister wanted her there. They’ve been tight since Imani was born and she’s still practically a stranger.

Plus, she put Setton behind bars and there’s likely some resentment.

He suggests that if they came back because he was feeling that, it was likely a mistake.

Devon tells her that this reminds him of how he didn’t trust Katherine and that kept them apart until it was almost too later.

Hasn’t Naya made it clear that she loves spending time with her? Maybe this is her chance to make up for all the time they’ve lost?

She doesn’t think that’s practical given how much work there is to do on the merger.

He reminds her there is a whole legal team and she can work remotely. Devon also assures her that their relationship can survive the distance.

Elena surprises Nate at the office. He says this is a beautiful surprise and wasn’t expecting to see her until later.

They had back to their place and have sex. Cuddling, they say they missed each other and then discuss her conference.

He hopes someone recorded her presentation because he would like to see it. She says it was well-received and she feels like she’s found her voice. He’s proud of her.

Elena thinks everything is finally coming together and she has a lot to bring to the table. He needs to get back to the office.

They chat about her contract. She hopes that Amanda will be taking over handling it. Nate tells her again how glad he is she came back early.

Devon shows up at the office.

He calls Lily and points out no one is in the office. He looks for a file in her desk and ends up finding something else.

Nate strolls in and Devon asks him to explain what he just found. It has a conflict regarding an act. Devon is annoyed that they now have two festivals promoting the same guy.

Nate says this was just a miscommunication.

This worries Devon. These misunderstandings can’t keep happening while the competition are watching them.

Frustrated, he doesn’t have time to supervise him and thinks they may need to find him a mentor. Nate reminds him he’s an adult.

Amanda walks in and the men split up.

Nate sends Imani a text to ask about the contract negotiations. She writes back and asks him if he has time to talk.

At Crimson Lights Sharon admires all the balloons that Faith has bought for Tessa. She put together a care package for her too.

They talk about how her whole career rests on the success of this surgery.

Mariah and Tessa arrive. They sit down and Mariah explains that Tessa has to be on complete vocal rest for days. This means she gets to say sappy things to her and she won’t groan.

Sharon will give her plenty of smoothies and decaf tea. At least no one has to worry about Tessa laughing at Mariah’s jokes.

Faith hands Tessa a white board to communicate with. She draws a heart on it.

Mariah explains the long road to recovery her wife will be facing. Faith tries to put a positive spin on it. Mariah jokingly adds that she and Tessa will likely never fight again since she can’t yell.

After they go upstairs with their balloons, Mariah soon returns to work on her laptop. Kyle strolls in and asks her how the surgery went.

She senses something is wrong.

Kyle fills her in on Locke and how hard this situation is for Harrison.

She says it sounds like Diane is being helpful. He admits she is, so much so that he told Harrison that she’s his grandmother. They assess how his mom is doing the right thing now.

He knows his mom can’t erase what she did, but being there for Harrison is as close as it gets.

Tuesday’s Y&R recap: Adam eavesdrops and his father gives him a warning as Chance digs into Locke’s death.