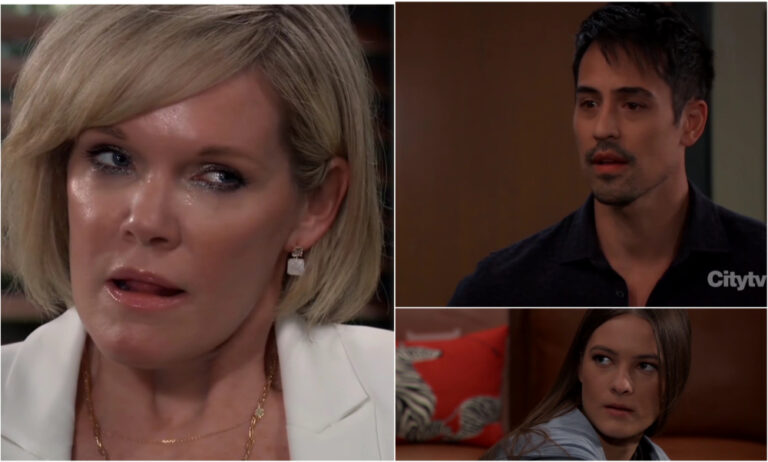 We also have Wednesday’s GH recap where Nikolas stopped Victor from having Esme killed while Ryan made a deal with her to find her mother.

At the axe throwing club, Dante and Mac chit chat. Mac knows he turned down an undercover job in New York that could have raised his profile. He wonders what he’s thinking about for his future and suggests he go for chief of detectives.

Dante reminds Mac that’s his job and he’s irreplaceable. Mac is thinking about the future. Dante is only concerned about Sam right now.

Sam joins them and announces Felicia can’t make it. Mac decides to go and suggests that Dante think over his suggestion.

Left alone, Dante tells Sam he wants to discuss their future. He drops to one knee and she gasps. He’s just picking up her phone. After she admits she thought he was about to propose, they laugh about it.

Dante just wanted to suggest they start living together. She hasn’t really thought of that. That surprises him. Sam has only considered it fleetingly. Things are great, so why change them? He thinks they could make them even better.

She’s not opposed to it and has to think about it more. They kiss and he takes off.

At General Hospital, TJ checks Felty over and observes he doesn’t have a concussion. He took quite a beating and the cops will wants to talk to him.

Sasha and Brando walk the halls and discuss therapy. Willow and Michael arrive and check in. They discuss Sasha’s meltdown and Willow’s dizziness. This is a little uncomfortable.

Sasha says it’s okay: she already knows Willow is pregnant. She gives her a hug and congratulates her. Sasha suggests they celebrate soon. Willow wanders off and Sasha sends her husband off so she can go to her session.

Sasha says he’s hardly left her side since her incident. It’s overwhelming and she’d like to get back to normal.

At the nurses’ station, Willow tells TJ not to mention to Michael that there could be any issues. She will deal with it when they know more.

Later, Willow joins Sasha and guesses she’s known about the pregnancy since before her meltdown. Smoltz pops up and comments on how pally they are looking. He wonders if Willow has forgiven her for mowing down her mother.

Willow claims that was just a terrible accident and threatens to sue him. After Willow walks off to complain to security, Sasha calls him a vulture. He exits.

When Willow returns, she says they can send Diane after the reporter. Sasha points out that nothing he said was a lie. Willow insists it was just an accident and she has noting to feel guilty for.

Dante drops by the hospital to interview Felty. The paparazzo insists that he doesn’t know who attacked him. “Like I would tell you of all people if I did,” he laughs.

Felty plays that off. Once the cop leaves, Smoltz sneaks in and Felty tells him he has a big story in mind: Sasha being on drugs when she ran Harmony over.

At the gym, Dex and Sonny talk about beating on Felty. The boss tells him there is a time and place for everything and he can’t go around picking fights. Dex says that if he needs something like this done again, just to ask.

Dex steps away as Brando stops by. Sonny senses he’s worried. They sit down an Brando worries about how his wife keeps pushing him away. Sonny tells him just to prove he’s not going anywhere.

Michael meets with Dex in a stairwell and tells him that he has Sonny right where they want him. Dex fills him in about the beating and Joss recording it. He convinced her to erase the video.

Sonny was grateful and he thinks he can build on that. Michael encourages him to act like someone he lost: Jason. He needs someone to look up to him and be in the right place at the right time.

Brando catches them together.

In the court room, Diane tells Taggert that the ADA made exactly the case she was expecting. Spencer’s testimony may have given them an opening they can exploit.

Spencer sends texts to Esme worrying about where she is.

Across the room, Trina wishes to Rory that she had a time machine so she could go back in time and avoid Spencer.

Esme arrives and the ADA wants to go over her testimony. Esme doesn’t want to sound rehearsed. Ava swans over and says her lies always sound natural.

When the lawyer steps away, the women bicker. Esme warns that she could destroy her world. “Try it. I dare you,” Ava taunts.

Esme is sick of her acting superior and suggests she doesn’t know her husband as well as she thinks she does. Before she can explain, Nikolas jogs in and stops her. “Too late,” she says.

Nikolas warns her not to make him an enemy. “Have a nice chat with your wife,” she says, leaving them alone. Ava doesn’t like what she’s sensing.

She and Nikolas go into a room and she guesses there is a secret. The prince apologizes and tells her he loves her so much. Her jaw drops. “I made a huge mistake,” he says.

He thought they were over and slept with Esme. Ava shuts her eyes, twists her head, and her lips curl up. Nikolas insists it was only once and she pieces together when it happened.

He thought he lost her and was devastated. Esme saw her chance and took it. “Poor you, seduced by a high school graduate,” she says, calling him stupid.

When he reaches out to her, she says he’s touched her for the last time. He swears Esme took advantage of him. The prince was going to confess but she talked him out of it.

Ava says he’s a coward and he’s been caught in a trap like a rat. “You are no man, you are a spineless weakling and I am going to burn you to the ground,” she promises.

After she walks out, he refuses to lose her without a fight.

Esme runs into Spencer in the court room. He demands to know what she will say on the stand. She tells him that saving Trina is a wasted effort. She’s already found a knight in shining armor and it’s not him.

He claims not to care. Either she can do as he’s requested and benefit or leave with nothing. She refuses his offer and says she can find her birth mother a different way.

When Esme takes the stand, she describes the night in question. Diane keeps Trina calm.

When Diane takes her turn, she starts prodding Esme about having no friends. Esme claims she was met with hostility and never given a chance. The lawyer uses this to suggest she has motive.

When the ADA crosses, she gets Esme to confirm where Trina would have been.

There’s another recess. Diane tells Trina and her family that her testimony is all about proving her character. That’s what will sway the jury to believing she’s innocent. She’s eager to defend herself.

Joss reminds her to tell the jury everything.

Spencer corners Diane and announces that he can fix this. After he tells her what he wants to say, she says it might help.

The session resumes and she calls Spencer up, to everyone’s surprise.

Esme goes to Wyndemere to pack her bag. As she does, Ava bursts in and calls her a “conniving little whore.”