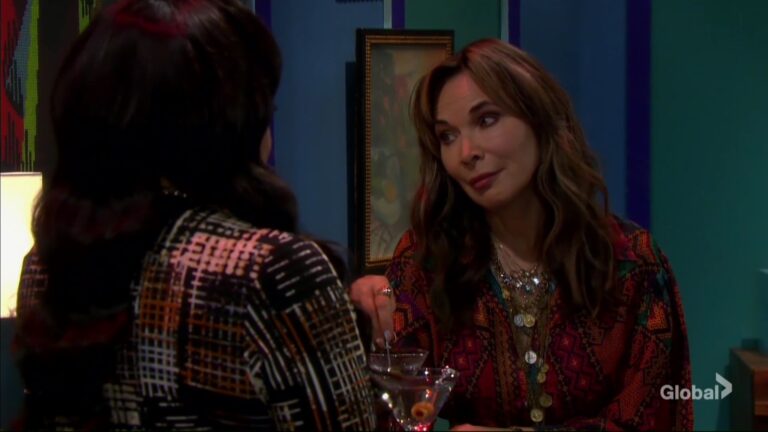 SoapsSpoilers has the Days of our Lives spoilers the next two weeks. First, take a look at the Days July 18-22 spoilers. Then check below for what’s coming up the week after!

This includes Eric getting close to someone new, and Orpheus inspiring more dread.

Eric and Jada get to know each other.

Brady and Chloe learn that Kristen’s been released and pardoned.

Brady talks with Eric about how to control how and when Kristen sees his daughter.

Jake and Ava offer Kristen their bed while they sleep on an air mattress. Jake complains.

Kristen’s ready to stir the pot now that she’s out of the hoosegow.

Brady tells Kristen that he and Nicole have veto power over her and Chloe’s not fired.

Ava and Jake talk about their relationship and he admits he loves her.

Zach is surprised to see Alex Kiriakis (played by Robert Scott Wilson) in his living room.

Nicole is attacked by the creep from the pub that Eric stopped from stealing.

The creep shoots Jake, dead and Brandon Barash exits Days of our Lives.

Steve and Justin have a creepy encounter with Orpheus.

Jake is shot and dies from his wounds.

Kayla tells Ava she couldn’t save him.

Ava reminded Kayla that she has pronounced people dead in Salem before and they came back.

Kate and Gabi argue in her office until someone calls and  tells her that Jake died.

Gabi is saddened by her ex’s passing as is Kate.

Chanel gets some help making up her mind from Pauline.

Allie and Johnny argue about who should be with Chanel.

EJ does his best to exploit a tragedy.

Roman lets Abe know that Lucas kidnapped Sami and Kate knew and kept it to herself.

Kate unloads her baggage about Roman to Paulina.

Paulina thinks Kate and Roman seemed so happy. She asks what’s wrong with that man but Kate blames herself.

Kristen arrives at the mansion to give her condolences to Chad but EJ lets her know he and the kids moved out.

Kristen decides she wants to move into the DiMera mansion, which is better than crashing with Jake and Ava.

EJ thinks he and Kristen could become close again — join forces to vote Gabi out and take back their father’s company.

Chad moves into Alice’s place with Julie and Doug.

Chanel chooses Allie over Johnny, though she loves them both.