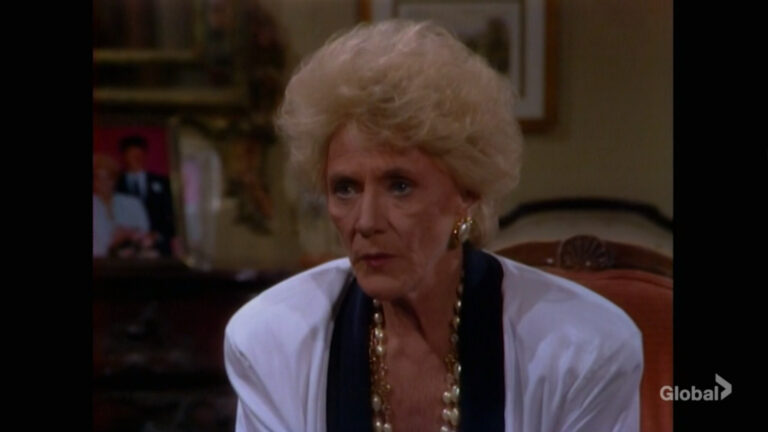 In this episode of CBS’ The Young and the Restless, Kyle and Summer react to learning Ashland lied about being cancerous, as Ashley and Phyllis work together to get rid of Diane, and Allie decides to stay in Genoa City a few more days. In the previous episode, Jack and Phyllis had sex & Summer wanted to move home, and asked Kyle if Jabot could buy Marchetti to make it happen.

At the Grand Phoenix, Amanda and Phyllis have drinks and chat about missing their time together at the wedding. Ashley interrupts, clearly upset. “How could you let this happen?” Phyllis soon learns this is about Diane and thinks Ash is over exaggerating.

Amanda’s out of the loop and learns Diane’s Kyle’s mom. Phyllis explains she was keeping an eye on Diane but tells the blonde that they’re on the same side.

Phyllis jokes about being BFFs with Ashley about this since they’ve a common goal to protect Jack and Kyle as well as Summer. Ashley’s good with Phyllis becoming close to the family if it means  they can get rid of Diane.

They make a deal that Ash will help. She goes off and Amanda needs an explanation. Phyllis shares she was accused of murdering Diane once and may just do it this time.

Amanda doesn’t think she should joke about that. Phyllis tells her that “every single person in town wanted that bitch gone.” She wants Jack and Kyle back in her life.

Phyllis admits she and Jack were together last night. Amanda’s happy.

Amanda thinks that she could thank Diane for this. Phyllis denies that she has anything to do with it. She won’t let her get between them.

At the mansion, Summer tells Jack and Kyle that Harrison licked the icing off the muffins and is jumping off the walls. They should get to the park soon.

Kyle and Summer share their news with Jack that they’ve a way to stick around Genoa City. Jack’s tickled. They refuse to tell him their plan just yet and asks him to keep it from Phyllis for the time being, but they share that they miss family and friends.

Jack sits them down and tells them that Ashland faked having cancer. Kyle and Summer are stunned and disgusted. He fills them in on everything. “That’s beyond twisted!” Kyle yells.

He can’t believe that Ashland faked cancer to Harrison. “I mean, who does that to their own son?” Jack and Summer look around, uncomfortable. Kyle realizes his mother did it to him. Later, Jack’s alone when Allie turns up after a celebration run. She got her final grades and did better than she thought. Jack’s thrilled.

He can brag. Since she doesn’t have school to go back to, Allie asks if she can stay for a few more days. Jack wants her to stay for as long as she likes.

He wants to have a party for her but she doesn’t want that. She’s used to burying herself in the lab all day. Ashley walks up. “Now that sounds like me.”

They talk about her education and Jack boasts about her grades. Allie talks about everyone she’s met including Noah. Jack calls him a ‘rolling stone’.

He’s not sure how long he’s in town. Jack goes and the women find they’ve a lot in common. When Ashley brings up the death of Keemo, and how much Allie’s dealing with, Allie goes off to shower.

At Society, Ashland frowns as he dines on fruit alone. Victoria appears and makes a beeline for him. He offers to leave and she asks after his injuries from the fire.

He admits it’s fine and talks about being hopeful to kick the ball around with Harrison soon. He admits he isn’t leaving town while his son is there. She gets it. He takes off.

At Crimson Lights, Chloe barks at Esther for doing too much for the kids like baking cookies and making being a grandma a full time job. She’s grateful for this but Esther needs her own life.

Esther likes being a grandma. “You deserve to kick back. It’s Esther time,” Chloe says. Esther grins but admits she’s not good at self care. Chloe knows.

That’s the point. She encourages her to get out there and find a job.

Esther wants a man. Chloe’s scandalized, but Esther’s dating past is checkered.

Jill used to say her bad taste in men is legendary. Esther flashes back to talking with Mrs. Chancellor about Tiny. She encouraged her to let Brock get through to Tiny.

Esther cried and hoped that her baby was a girl. She didn’t want anything to remind her of Tiny. Mrs. C said that Tiny’s still the father, no matter what. Esther reminded her of Leanna Love and how right she is about men being “no good.”

She flashes to Jill telling her to stay away from Roger, but Esther already married him. Jill told her that Roger was a bigamist. She flashes to Esther losing her serving job.

She said she met a man and Mrs. C put a hand to her head as if a migraine was coming on. She told her that she thought they were to marry in Vegas, but the guy only wanted to gamble.

He lost copious amounts of cash. “He lost all of your money?”

Mrs C asks. Esther comes back to the present and Chloe explains how different dating is these days. Chloe’s stricken to hear that her mama is on dating apps. Esther’s on one geared to seniors and needs help with her bio.

She talked about her job, which Chloe say sis a mistake. They need to go bigger! Esther recalls living with Jill and Mrs. C and how their difficulties were legendary. Chloe wants to fluff up her bio. Esther flashes back some more to her telling Chloe she loves working for Katherine and Chloe thinking she was a loser.

In the present, Chloe reveals she’s embarrassed that she spoke to her mother that way. They fix the bio and put her profile live. Suddenly, Esther hears a beep from her app.

At the park, Harrison plays while Summer and Kyle watch and talk about Diane crashing the wedding. Summer’s worried about what she wants from Kyle.

Ashland wanders up and Harrison sees him and goes running to his arms. “Father!”

Ashland holds the kid and Kyle as Summer look discomfited. Ashland asks for time alone with his son and Summer says no.

Kyle gets the kid to go play with friends and tells Ashland that they know he lied about having cancer.

Victoria hides behind the potted plants and eavesdrops. When Ashland calls the kid his son, Summer clarifies that is not who he is. Victoria comes out as Ashland leaves.

She hugs Summer and they tell her how sorry they are that Ashland lied. Victoria’s quiet as they wish he’d just leave GC. Once Vicky’s gone, Kyle says they need to keep their guard up with him around.

At Grand Phoenix, Jack finds Phyllis who asks if he’d like to have coffee and watch Diane check out. Jack’s sorry she’s a disruption. Phyllis admits it lead to a bonding experience with his sister.

Ashland sits alone at Crimson Lights and stares at Harrison and Victoria’s photos. He flashes back to their wedding night in Tuscany. He recalls promising he’d make it up to her that he lied.

Victoria thinks in her office and then calls her mama and tells her she changed her mind and wants to go away with her.

Nate stops by Amanda and Imani’s table. “Am I interrupting something?
Amanda tells him they got bad news.

Michael tells Victor that he may have found a solution to getting Locke out of town.

Ashland and Diane sit together at the park. “You’re Kyle’s mom. Maybe we have more in common than just having a bad day,” he says.