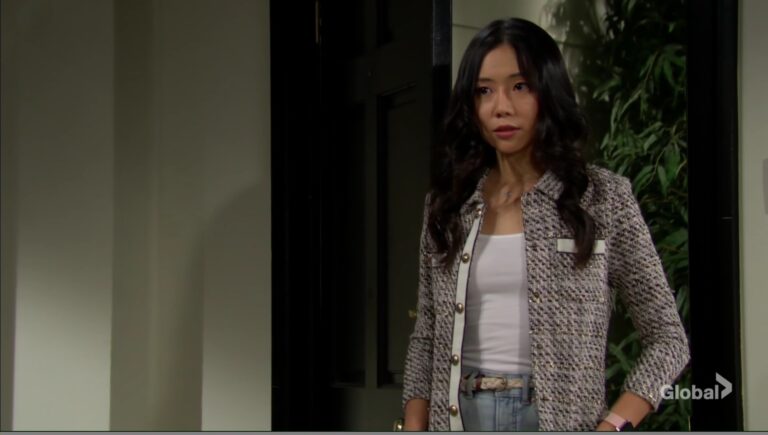 In this episode of CBS’ The Young and the Restless, Jack meets Allie, Amanda has a burning question for Devon and Chance’s therapy is hard on him, while Rey and Chelsea get together. In the previous episode, Victoria ranted to Nikki for believing Ashland before he signed as co-CEO.

Jack and Phyllis knock on Keemo’s door before letting themselves in, during the day. Jack barely slept last night, thinking about all he lost with Keemo. Phyllis thinks  his processing is natural. Jack admits it’s more difficult than he thought it would be.

He wept over the time he lost with his son and Phyllis is the only one who got him through this. He thanks her for her support. She’s happy to do it. She smells perfume. Someone has been there. Nothing is amiss.

Jack wonders why the person lured him there. What was the point? He thinks the photo is the next clue in his mystery. Jack admits the girl with Keemo looks familiar.

There’s a phone number on the back of one of the photos but it’s not the same as the one texting him. Jack calls. He leaves a voice mail for Allie, asking her to call him, regarding Keemo — Hao Nguyen.

Allie calls and Jack asks to meet. She tells him she’ll get there as soon as she can. Phyllis urges him to have a plan for her. He considers what he’ll ask the girl. Phyllis wonders if she should be gone when Allie shows but Jack wants Phyllis there. He kisses her hand when she holds his for support.

Abby and Chance visit Devon and Dominic. It’s uncomfortable when Chance tells him that they’d like to take him home now. Devon was planning on bringing him back today. Chance wants to spend time with him before therapy. Devon says it’s fine. He wishes he had more of a heads up but they’ll be flexible. He says the boy is teething. Amanda appears and Chance thanks him for understanding.

Devon says this is completely fine. He’ll be seeing him soon. They take off and Devon and Amanda call him frigid and anxious. Devon worries about what that will do to Dom.

Sharon grins wildly when Rey wanders up in Crimson Lights. He finds her attractive. They flirt over her doing inventory, which he finds hot. Once she’s done, her afternoon is free. Everyone’s working and Faith is babysitting Christian at Nick’s. Rey finds it fascinating. He smiles widely because he too doesn’t have to be at work until tonight. He wants to spend time with her.

They agree to do something fun that they haven’t done in a while. “Bowling,” he says. Or a dive bar to play pool. Maybe to the lake to see if the ducks are back. Maybe the bookstore on campus. Sharon has something else in mind.

She goes to finish up her inventory first. Devon and Amanda appear and catch up and talk about how they hope things will go well with Devon and Dr. Huffman. Devon fishes for information but Sharon has none. She wouldn’t tell him if she knew.

He expresses his concern but Rey says that everyone has Chance and Dominic’s back. He has nothing to worry about, which makes Devon relax. Later, Faith calls. Christian has a request for Sharon to come over.

She lets Rey know she has to help him with a school thing. She’s sorry. Rey gets it. She promises they’ll make a date for another day. She kisses him and goes.

Outside, Amanda and Devon drink coffee and she comments that he interrogated Sharon. He denies it but she sees otherwise.

She’s worried about his state of mind. Though the four of them came to an amazing agreement, Devon is still trying to find things to worry about. She doesn’t think it’s subconscious.

Devon just wants what’s best for him but Amanda isn’t sure he’s comfortable with the current arrangement.

She encourages honesty and says she has an indelicate question. She asks outright if he wants sole custody of Dominic. He tells her no. He’s just concerned about his mental state and doesn’t think Chance realizes the depth of his trauma.

He’s speaking from being in therapy and taking that baggage home. He knows the process is long and hard before you have a breakthrough.

Chelsea arrives and Rey asks to sit together. She’s just back from New York and says she just visited him. They talk about the Black Hawks playing. He thought of her and Connor when he saw tickets on sale.

They love his enthusiasm. Chelsea comments that he’s only like that with people he trusts. She’s glad he’s one of those people.

We recommend this fantasy romance game for the PC

B&B is renewed and boasts a special episode coming

At home, Chance plays patty cake with Dominic and chats with him, happily. He wonders to Abby about how therapy will be when he and Dr. Huffman dive deeper into his issues.

Abby promises she’ll be there to support him. Chance hopes he’s not picking up on his nerves.

Abby doubts it. He feels his love. She puts the baby down and finds Chance laying on the sofa, deep in his man pain. He has mixed feelings about therapy. He’s worried a breakthrough will mean everything will come out and it’ll be messy.

Chance tells Dr. Huffman in his office that their last session wiped him out. His wife is supportive. They talk about Chance failing his team. Huffman asks him to elaborate.

Chance talks about hearing everyone inside yelling during the bombing.

It hurt more than the shrapnel in his leg. They were some of the toughest people he knew and they screamed for their lives as Chance was unable to move. He felt worthless.

He looked for survivors and called out names but it didn’t help. He hid and played dead until the men who bombed the place left. He wonders why he survived and not them. He talks about making reparation with the families and questions how did he hide when they all died?

Chance returns home to Dominic crying. He’s teething. She thinks if he held Dom it’d help. He refuses. He doesn’t think he has the touch right now. She insists and he yells, “I said no!” He apologizes and agrees he needs a moment to decompress.

He worries being around the negativity isn’t right for the baby. “We’ll make it right together,” she says as she strokes his hair.

Allie turns up at Keemo’s house. They introduce themselves and she asks why they’re there. Are they lawyers or with the bank? He tells her he’s Jack Abbott. She doesn’t know him. He tells her he was Keemo’s father. Her lips part in surprise.