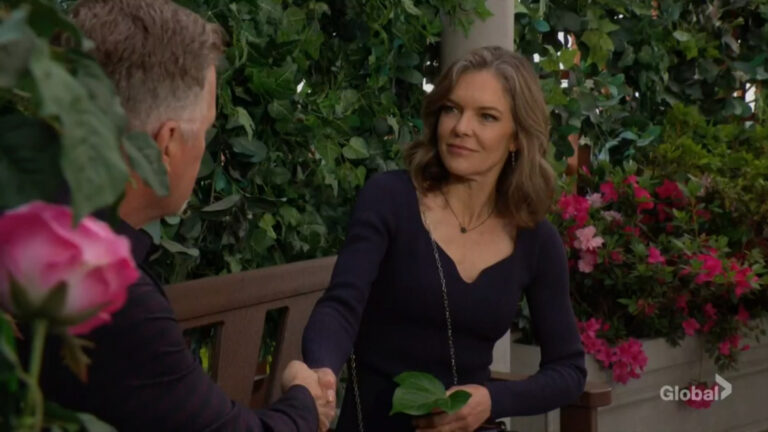 In this episode of CBS’ The Young and the Restless, Diane meets Harrison, Summer and Kyle ponder their options, and Chloe worries about Esther’s date. In the previous episode, Kyle and Summer were disgusted by Ashland, Esther remembered Katherine, and Ashley and Phyllis joined forces against Diane.

Summer and Kyle are in Chancellor Park. They hope Harrison didn’t notice them sending Ashland away. She thinks living in Milan would protect their son from Ashland’s interest.

Diane pops up. They suspect this isn’t a coincidence. She swears she didn’t know they were there. Harrison runs back and Summer is about to lead him away when Kyle stops them.

He introduces his son to Diane as someone he knew when he was little. She chats with the kid about leaves. Summer ushers him away as Diane hopes to see him again some time.

They take their son to Crimson Lights. He admits to Summer that seeing his mom threw him. She thinks they need to establish more guidelines to deal with his mom. She’s afraid Diane will take advantage of his big heart.

Chelsea and Connor come in. When he goes off to play with Harrison, Chelsea digs for details about their lives in Milan. Summer tells her that it’s awesome. They chat about the wedding dresses Chelsea designed.

The topic turns to things at Fenmore and what a dream it is to work with Lauren. Things have been great since they left Sally behind. They are expecting big things.

After Chelsea leaves with the kids for ice cream, Summer admits she was probing Chelsea for some information. She’s taking stock of things in town in case they move back.

Kyle still has no idea what to do about Locke or his mother. Seeing Diane with Harrison reminded him of what a warm mother she could be. She reminds him all the horrible stories about her are true.

Kyle thinks she will follow his lead and take things slow with Harrison. She reminds him he doesn’t need to make a decision about this right now and can always change his mind.

She tells him that if he lets Diane back into his life, he needs to do it for himself, not for anyone else. She’s not sure it’s the healthiest choice. He thanks her for saying that and can tell she doesn’t want him to reconnect with his mom.

Summer will respect whatever he decides, but if his mom hurts him, he will make her regret it.

Esther shows Chloe the dating profile of Dwight, a guy who has contacted her. He wants to meet in person. She anxiously does her lipstick. Her daughter warns her this guy is a walking red flag.

Esther doesn’t see how but Chloe thinks this guy must be a scammer. Her mom points out he just wants to meet in the park. They aren’t going to have sex there.

Chloe reminds her she’s made some poor choices in the past. Her mom doesn’t want to tap on her phone all day to get to know someone. She wants to live. Her daughter relents and insists her mom needs a bit of a makeover.

A little later, Esther waits in the park. Dwight (played by Sam McMurray) arrives with flowers. She starts rambling about how the park is named after her old friend. They talk about her work and he notices that someone is watching them from behind a column.

Dwight calls out to them. It’s Chloe. She steps up and apologizes. She just wanted to make sure her mom was safe. Esther orders her away and then apologizes to Dwight.

He tells her that he works for her favorite cleaning product company. They chat and chuckle.

After the date, Esther meets her daughter on the patio to tell her how lovely Dwight was. She assures her she will keep things slow. Chloe hopes there won’t be any wedding bells any time soon.

Esther assures her she is happy being on her own. But she’s also happy looking after her kids and reminds her she has cookies to bake. Dwight texts Esther asking for another date.

At Newman, Victoria gets off the phone in her office and tells her mother and Victor that she has their plans for the trip to the spa solidified. He thinks the trip will be wonderful for both of them. Things will look different when they come back.

She wonders if that means he’s planning some kind of move against Ashland. He claims he just thinks she’ll come back with a different perspective. Victoria is sure there is more.

Locke is staying in town and she is destined to bump into him. She’ll just have to get used to it. Her father can’t tolerate that. If she still has feelings for that man, he can do a lot of harm.

She admits that Locke still has a place in her heart but she will let it go. She doesn’t want to waste her energy being angry at him. The trip to Switzerland is to exorcise him.

Michael finds Ashland at Society and they start trading barbs. The lawyer taunts him about all his bribes and the time he spent in a Peruvian jail.

He asks him to leave Victoria alone and leave town. If he doesn’t, he will have to take legal action against him on Victors’ behalf.

Locke suggests he convince his boss to live and let live. He’s not going anywhere anytime soon and is not looking for a fight. Victoria has made up her mind about him and he’s done trying to change it.

Michael wishes he could believe that. Lauren pops up and declares her husband is too smart to believe a son-of-a-bitch like him. Michael introduces them to each other.

Lauren isn’t falling for that. Ashland apologizes anyway, but they aren’t getting any confessions. She vows to do her best to send him to prison like she did his ex-wife. He walks away, sighing.

Michael admires how fired up his wife is. She guesses he’s not going to stop working for Victor. Sitting down, Lauren reminds him he wasn’t going to get sucked into Victor’s nefarious plots.

He thinks the Newmans need his legal skills now more than ever. She doesn’t buy that; this is about revenge against Ashland. Assuring her this is not dangerous, he admits he will be burying him in legal procedures.

When he suggests brunch, she declares she’s lost her appetite and storms out.

Michael stops by the Newman office to see Victor. Victoria doesn’t want to hear anything about Ashland. She just wants to focus on her trip.

The lawyer tells her how rejuvenating his trip to France was. She leads her mom out.

Michael tells Victor that he thinks he’s found a solution to get Ashland out of town. Sitting down, he says they can hit him with a barrage of legal actions to expose his fraud.

Victor groans that would make Victoria and the company look weak. Michael doesn’t think it would ever go to court. It would drive him away before that could happen. If they make this expensive and time consuming, they can force him out.

Crossing his arms, Victor can’t believe he’s playing it so safe. He can guess why: Lauren. The Newman reminds him that legal avenues will never get rid of him.

Michael adds that Harrison may not go back to Italy any time soon. Victor suggests the boy could be Locke’s Achilles heel.

Ashland sits in the park looking at pictures of Harrison on his phone. Diane finds him and asks if he’s okay. He looks the way she feels. They both have a lot on their minds.

He invites her to sit down and introduces himself. She realizes he’s Harrison’s other father and introduces herself. He thought she was dead. They chat about how adorable Harrison is.

Locke suggests they may have more in common than just having a bad day.