Devon Worries Billy’s a Professional Liability to Lily — & After Chloe Sends Sally on a Work Trip, Sally Invites Adam Along 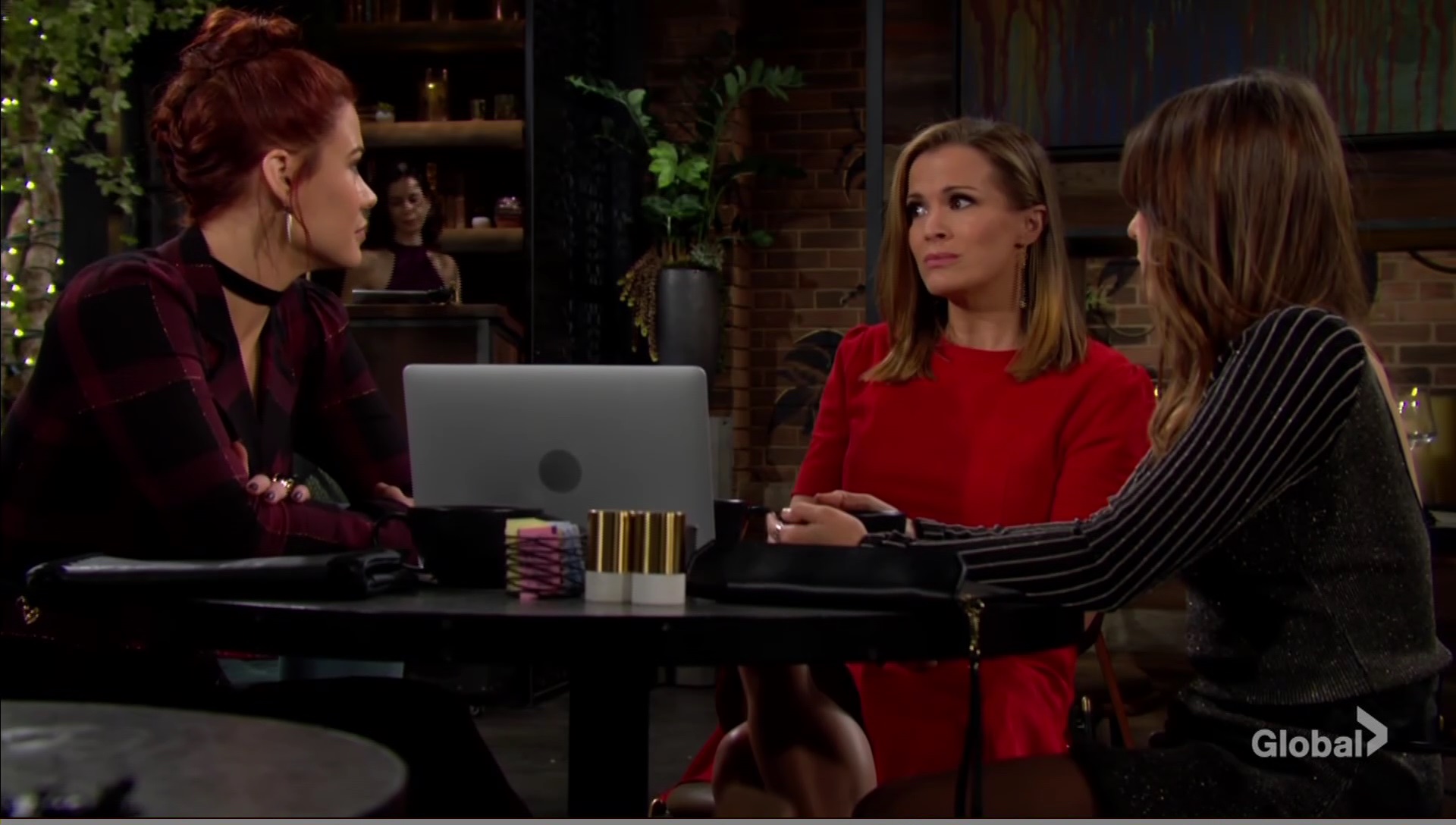 Canadian Y&R day ahead recap for Tuesday, January 11, 2021 episode, which airs in the USA Wednesday, January 12. (Recaps live by 5:45 PM EST daily.) In the previous episode, Devon’s nightmare made him wonder if he’s being selfish. In this episode of CBS’ The Young and the Restless, Sally sets up a meeting with Chelsea and Chloe to set things straight, Adam’s angry to learn Victoria’s news, and Devon tells Nate that he’s taking action to be with Dominic.

Lily stops by Adam’s office to ask what he meant by his “cryptic text.” He forgets what he wrote. She spells it out. You wrote, “Best of luck with Chancellor,” and asks what it meant. He tells her there was no hidden meaning. He respects her and wants her to do well in her new position.

Lily knows he likes having the last word. Since Billy got the best of him, he was taking a shot at her. “Far from it,” Adam says. Billy had a tantrum. Lily reminds him a truce was declared.

Adam asks what she wants. He’s tired of the Billy superior act. Lily grins. “There it is.” He hasn’t let it go, has he? Adam sits back in his seat and purses his lips, then reiterates what he just told her. She lets Adam know that Billy is coming to work with her and asks him to let it go so they can move on with their lives.

Victor wanders in and overhears. Adam explains why Lily’s there. She tells Victor that Billy waved the white flag. Vic tells her it’s good to see her and she lets herself out.

Adam fills his dad in on Billy pretending to be drunk as a means of revenge so that they’d post a story about his downfall. Then he’d sue. Victor calls Billy pathetic and asks Adam to ignore him. He lets Adam know that Jill is selling ChancComm to Newman Locke. “No!” Adam says. He wants to call her but Victor say to leave it alone.

“We lost.” He says they need to congratulate Victoria. Adam shakes his head.

At Newman, Ashland kisses Victoria, who tells him today’s the greatest day. Jill wants to hammer out details to sell ChancComm to them. “We won.” She says. Ash grins. Victor and Adam must be seething. Victoria says she thinks her father is okay with it. She thinks Adam will be seething.

If she has it her way, ChancComm isn’t the only company Adam will lose. Ashland thinks she’s making a smart move but wants to be sure this is the battle she wants.

He comments that Victor defended him when everyone turned his back. He hopes she doesn’t poke the bear unnecessarily. Victoria tells him that a good business battle earns his respect. Ashland gathers her to him. They kiss and he’s hot for how she knows how to play the situation. He calls Adam the wild card but she shrugs. She knows how to handle him.

At Crimson Lights, Devon talks to Nate about sharing custody with Dom. “They said no to me,” Devon admits. Nate’s sorry. Devon appreciates his advice. Even though Abby and Chance didn’t give him the answer he wanted, it pushed him into taking action. Devon’s still concerned about Chance’s ability to be a parent and he thinks this is his only option. Nate is worried about it getting messy. Devon hopes that doesn’t happen. Nate wishes him luck.

They talk about the changes to Nate’s living arrangements with Elena. Now that he’s in a more administrative role, he barely sees Elena at the hospital, so it’s working out. Devon comments that they act like newlyweds. Lily turns up with coffee and they ask her to join them. Nate needs to get coffee for Elena. They have to go shopping later. “For new lamps because she threw away your ugly ones?” Devon asks. Nate refuses to respond which makes them all laugh.

He goes and Devon tells his sister that he’s going forward with shared custody. She’s shocked. He wants to talk about her. She’s happy with her new job and admits Billy’s to be her new COO. Devon worries he may be a liability to her, professionally. Nate sees Ashland inside and learns his cancer stopped spreading.

Later, Lily calls Billy and tells him she’ll see him when he gets back. She finds Nate and Ashland chatting. Ash says he caught Nate on his way out for a free medical consultation. Nate finally heads out and Ash catches up with Lily’s new job. Lily brings up Billy. She asks Ash if he can walk away from Billy the way he has.

At Society, Sally can’t work. She flashes to Chloe telling her that she wants the three of them to work like a team and then to Adam telling her that the spying is done. She frowns and sighs and calls someone to figure out this working relationship of theirs. She asks them to meet. Chelsea turns up a few minutes later and Sally reveals she was spouting platitudes when she apologized earlier. She prepared new work for her and asks if she can look at objectively.

Chloe turns up and asks why she was summonsed. Sally wants to make things work and asks her to join them. Sally shows twenty ideas and Chelsea approves two and doesn’t hate one. Chloe thinks they should run with them.

Sally thinks Chelsea’s biased about anything that comes from her. They argue about her pitch about school uniforms. Sally thanks her for her thoughts. Adam appears. “Oh. Mister Sunshine is here,” Chloe says. Chelsea goes to him but he’s not in the mood for anything. He’s had a bad morning.

She thanks him for his talk with Connor. He dropped staying at the condo but wants to get her to move to the ranch. She’s working on him. He laughs, as they agree she doesn’t want to live that close to Nikki and Victor. He gets it. At their table, Chloe watches and wants to leave. Sally wants to stay. She’s learning how to swallow her pride and maintain a pleasant demeanour. She grins. She’s kidding. Back at the bar, Adam says he’ll be moving eventually from the ranch too.

She asks for a coffee somewhere but he has to go back to work. He agrees they’ll grab a drink after work. She grins wildly. “Perfect.” At the table, Chloe notices that Sally’s watching Chelsea and Adam and is upset that things aren’t going right. She wants her to go to New York to handle interviews with designers as soon as possible.

Sally questions whose idea it was. Chloe says it’s not up to her to question this. Chloe thinks the two women taking space away from each other is good. It’ll let Chelsea see how much value she brings to the company. Sally nods. “Fine, I’ll go.” Chelsea returns and boasts about how in sync she and Adam are about Connor. Sally’s glad. He’s a great kid. Adam appears and drags Sally off. Chelsea’s glad when Chloe tells her Sally’s going to New York. “Good.” She’s glad but thinks they should have fired her.

Chloe’s angry that her friend is still after Adam. Chelsea just wants to give it a try. She can see Adam’s different. Outside, Adam apologizes for being brisk and dismissive yesterday. Sally says it’s cool. She didn’t take it personally. Since they’re outside, Adam gives her his jacket. She asks if he has business in New York. “I might,” he tells her. She says she has to go and it’d be great to have company. He grins.

Victoria meets Victor at the ranch. He assumes she’s there to gloat. She isn’t. He thinks it’s a hell of an accomplishment and doesn’t think there’s anything wrong with doing a happy dance. She’d never do that to him but maybe to Adam. Victoria says she’d like to buy Newman Media. “Huh…” Victor says.

She calls it a business strategy, not a personal vendetta. For Ashland, too. Newman Media used to be his company. When she asks if he’ll sell he leans in and looks at her, pride in his eyes. “You are my daughter. You’re Victor Newman’s daughter.” He doesn’t see a reason to sell. He thinks Adam has done good things for the business.

They’ve become a company to be reckoned with. She hasn’t seen any innovation. He reminds her of the fashion platform. She shrugs. That’s due to Sally and Chloe. She thins he should sell to her before Adam does irrefutable damage.