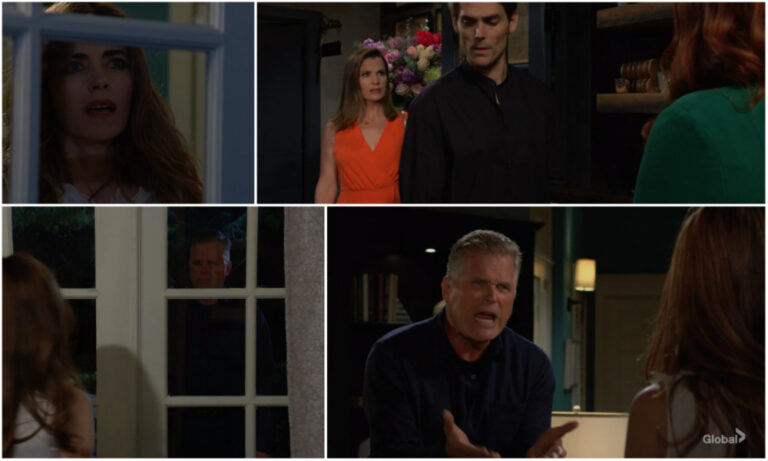 In this episode of CBS’ The Young and the Restless, Noah tells Nick his plans, Billy warns Nick about Locke, and Sally wonders what’s going on with Chelsea and Billy. In the previous episode, Adam warned Victoria Locke is after her, Lily made Phyllis an offer and Ashland stalked Victoria.

As soon as Victoria arrives at home, Billy knocks on the door. He’s going out of town for a while and wanted to make sure she can look after the kids. He senses she’s tense.

The wind beats the windows as they talk about Ashland. She explains that he was arrested today for violating the restraining order and he’s already out again. She only hopes he leaves.

As the wind gets more intense, she gets jumpy. He reminds her of how scared the kids used to get from all the house’s noises.

They wish their kids could stay that innocent. Billy admits he’s a little concerned about Locke still being in town.

He’s worried about her being home alone with him on the loose. She’s sure that Locke will be angrier with the Abbotts and she can handle this. There’s already a security detail looking out for her.

If he needs to go out of town, she’s fine picking up the kids.

She repeats that he has nothing to worry about and ushers him out. The wind keeps blowing and dogs bark.

Noah meets with his father in the patio at Crimson Lights. Nick starts to worry after all the build-up. His son assures him his decision has everything to do with what he wants.

He’s been taking stabs at different career paths to give his life meaning.

Nick guesses he wants out of New Hope. Noah is proud of the work they did there, but his heart isn’t into running it the whole time. He explains that art directing Mariah and Tessa’s wedding felt right.

He’s not thinking of being a wedding planner, he wants to turn the Top of the Tower into an inspiring night club. Nick asks if he’s run this by his grandfather.

Noah has to put together a pitch before he does that. He promises his father he will be at New Hope until he finds a replacement he’s happy with.

Noah hates that he’s letting him down. Nick assures him he’s not disappointed at all.

He’s thrilled to see how excited he is and offers him his support. They hug.

Nick was excited about him continuing his work, but if this is what makes him happy, he has his support.

Noah has to leave to change for his date. His father is always happy to give him advice.

Nick bumps into Billy, who immediately asks about how edgy Victoria is. The Newman tells him to stay out of it.

Billy thinks there is reason to worry and Nick tells him to stop white knighting for a woman who doesn’t want or need it.

The Abbott is sure that Locke will be out for vengeance. Nick dismisses this. Billy offers to stick around to keep an eye on his ex but Nick insists he leave.

Chloe meets with Sally at Society. She informs him she’s been given the go-ahead to give her the COO job.

They will both be in their positions on a trial basis and under pressure.

If she’s not okay with that, she’ll understand.

She makes it clear she trusts her ability and wants her for the position. Chloe is more than okay with this and accepts the challenge. She’s not taking it only because her relationship with Chelsea ended. She plans to work her tail off to get this right.

When she brings up Adam, he wanders in. He’s about to walk out by Sally chases him down.

He doesn’t want to do this again. She demands to know if he has destroyed their relationship to protect her career.

Adam claims that’s not what he’s doing but she refuses to believe it. He repeats what he told her earlier and encourages her to focus on her career rather than a man who doesn’t love her. She doesn’t believe that. He keeps insisting it’s over.

Chelsea hops in and Adam walks out.

Sally returns to Chloe and informs her that she and Adam are no longer together. She doesn’t want to hear that Chloe is happy about this. She wants to stay single-minded and proposes a toast to their careers.

Chloe asks if he wanted her to walk away with him. Sally won’t answer. Chloe warns her that Adam had a bad habit of keeping women in his orbit. She knew this would end badly. It always does. Chloe tells her not to give Adam that power and let it end.

Chelsea comes over to tell Sally she feels terrible for her, though it doesn’t seem like she does.

Sally appreciates the concern, but they are in a meeting. She informs her that Chloe works with her now. Chelsea practically starts hyperventilating.

Sally explains that she is the head of Newman Media now and Adam is moving on. Chelsea is smug about that.

She and Sally bicker with Chloe stuck between them. Sally tells her to go spew her poison somewhere else.

Chelsea wishes Sally good luck with the job she got through sex and walks off when she spots Billy. Sally thinks Chelsea is an “utter witch.” They talk about her leap into podcasting.

Sally admires her for being so generous to a woman who screwed her over. They get back to talking business. Sally glares across the room at Chelsea.

Across the room, Chelsea and Billy drink and talk about the podcast. She promises to have plenty of feedback for him.

Back at Victoria’s, there’s a knock at the window. She ignores it. It happens again. When she opens the drapes, Locke is standing there. She opens up. He wanted to see her one last time.

Ashland didn’t know how to say goodbye after all they’ve shared.

She agrees to hear him out if he will leave her alone after this. Once she lets him in, he tells her how hard it is to see her wary.

After they shared their happiest days together, does she really feel it’s all over?

She was his heart and soul and now those have been ripped away from him. He is the lost man that she and her father made him out to be. She made him believe that he could be loved.

Victoria refuses to forgive and forget. He thinks she’s unwilling to see how he’s changed. She tells him there is nothing left for him to fight for. “And nothing left to lose,” he says.

Her phone starts ringing. She says it’s over. Locke says her family turned her against him. She insists that’s not the case; he just doesn’t like to lose. He refuses to let her dismiss him.

She declares this conversation over and orders him out of her home and town. He accuses her of wanting him gone because she can’t face what she gave up when she destroyed their relationship.

There’s only one way for them to end this.

Nick starts knocking on the door.

Noah and Allie go to the Top of the Tower and she asks him how the conversation went with his dad. He says it was great and she was right about how he would react.

She tells him it’s time to celebrate.

After they get drinks, they dance. He admits he can’t stop thinking about their kiss. She kisses him.

“An accident? Is anyone hurt?” Chance asks when he gets a call.

“How much of this wanting to work at Marchetti has to do with Diane being there?” Summer asks Phyllis.

“That’s my security detail. If I don’t answer it, they are going to be here in a hurry,” Victoria warns Ashland as the phone rings. “Well then! We are going to have to make this quick!” he decides. 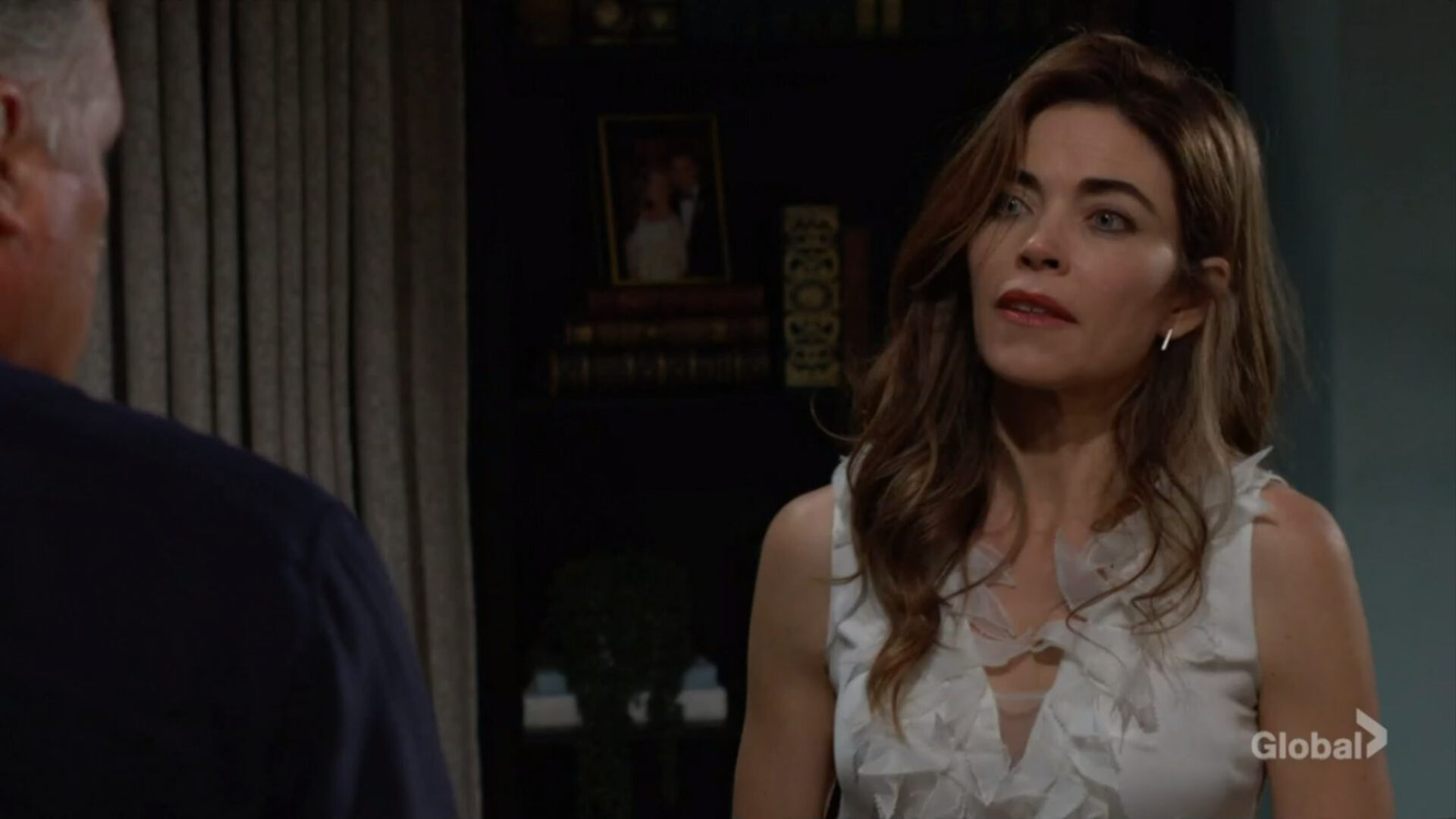