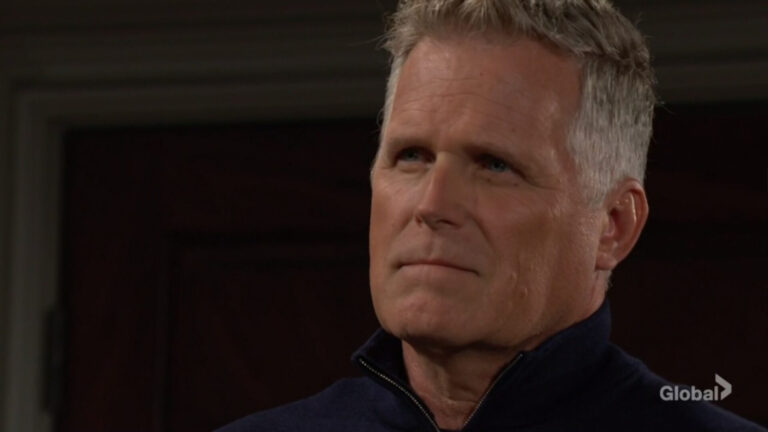 In this episode of CBS’ The Young and the Restless, Chelsea tells Lauren she has to back out, Victor asks Sally to convince Adam to return, Imani meets with Nate, and Amanda has to leave town to see her mom. In the previous episode, Phyllis warned Kyle, and then dropped her truce with Diane to join forces with Nikki.

Lauren joins Chelsea at Society, eager to see her latest designs. Chelsea takes a deep breath and informs her there aren’t any designs. “There are deadlines to be met,” Lauren points out. People have been waiting on her.

Chelsea explains she needs to take a sabbatical and put her mental health before her job. She wasn’t ready to start designing again and she’s dissolved her relationship with Chloe.

Lauren doesn’t want to be harsh, but she put her faith in her and they have been waiting on her. Chelsea says a friend can take over for her. Grudgingly, Lauren agrees to go along with that and asks if she needs any help.

Chelsea needs to deal with her problems herself.

In her suite, Imani calls to confirm her dinner reservation. Her sister shows up to go over some contracts and guesses she’s going out. Imani claims she’s having a work dinner with Nate and Sally.

It’s news to Amanda that she is working on getting Elena out of her contract. She offers to join in but Imani insists it’s not necessary. Amanda guesses this is just an excuse to spend time with Nate while Elena is out of town.

Imani says that’s crazy and accuses her of trying to control her. She gets a text about their mom. She had a seizure and wants to see Amanda.

Lily, Devon, and Nate listen to Billy’s latest podcast in the office. He asks what he thinks. Lily thinks it’s great and so does Devon. He’s glad there’s some humor in it finally.

When he plays a recording of the argument he had with Chelsea after the podcast, they wonder why. Billy thinks that it’s exciting and could attract audiences. Lily guesses he wants Chelsea to be his co-host.

He thinks it would be good to have someone to call him out and keep things light. They all joke about his depressing his podcast was and decide to give this a run. Billy still has to convince Chelsea.

Once Billy takes off, Devon asks Lily if she thinks it’s good for the Abbott to be throwing all his energy at podcasts so soon after the merger. He doesn’t want it to get in the way of his COO work.

She explains to them that Billy is the Grinning Soul. It’s been doing great so he’s pulling his weight. Amanda arrives and tells them her mom had a seizure so she needs to leave town. Devon takes her home and insists on going to see Naya with her.

Billy bumps into Lauren on her way out as he enters Society. He joins Chelsea and suggests that she become his co-host. There was some magic when they were recording and they could find a great tone that won’t be boring for the audience.

“I think it would be genuinely healing,” she agrees.

Nate joins Imani at Society. She tells him Sally can’t make it. He’s about to head home when she asks him to stay. She needs someone to talk to and tells him about her mom’s seizure. Nate tries to be optimistic about it.

Imani admits it was hard that when her mom finally spoke again, she said her sister’s name. Nate is glad that she can lean on him in times like this.

In Victoria’s office, Nick tells his sister that his kids were surprised to hear he was coming back to Newman, they chat about Faith’s interest in the family business. Victoria likes the idea of the next generation coming up through the ranks.

They are both looking forward to what’s possible without Locke. Nick is a bit concerned about how Ashland will react to the podcast exposing him. He’ll likely blame her and could come after her.

She dismisses this and insists he has no power to do anything. Nick suggests she not be so cavalier. Victoria says there’s nothing her ex can do to hurt her. He’s not convinced. His sister points out her father’s guards are still around.

She changes the topic to work and suggests they concentrate more on their streaming platforms. Now that Adam has moved on, it’s time they get rid of Sally. She thinks its perfectly reasons and lays out the reasons why. Her brother thinks it might be too harsh.

Victoria wants to surround herself with people who are loyal and Spectra does not fit that description. Victor may want Adam back in the company but she doesn’t. Nick offers to speak to Sally himself.

Ashland listens to the Grinning Soul podcast in his suite at the Athletic Club and frowns. Adam shows up. Locke is surprised he found him in one of the city’s two hotels. Adam explains that other people are likely to find some soon too.

He asks what he wants, assuming he’s back in Genoa City for payback. They talk around how they want revenge.

Adam heard him listening to the podcast and guesses it upped his wrath. The Newman admits he hated what Locke did to his family, but he is also sick of them using him.

He knows what it’s like to be hurt by the family. They both want to take their enemies down, but where do they start? Adam wants them to regret the way they have treated him and the easiest way to do that is for them to work together.

Locke doesn’t see how he can be helpful but Adam is clear that he knows exactly how his family works and Ashland can use that information to take them down. If that’s his plan, he’s in.

Victor stops by Sally’s office so they can clear up a few things. He quizzes her about what Adam is up to.

After he recaps his argument with his son, he reminds her that his son made Newman Media what it is.

Meanwhile, there is nothing in her past that suggests she knows how to run the company. She insists that her skills are transferable. Adam believed in her and she wants to prove herself.

“If you want to prove yourself to me, you’ll convince Adam to return to his position as CEO of this company,” he says. She thinks he should accept his son’s choice. He repeats his request and she guesses this something she shouldn’t refuse.

Once he exits, she tries calling Adam and leaves a message that they need to talk.

When Adam gets to Newman, he runs into his brother as he’s about to go into Sally’s office. If there’s a problem with her, he’d like to know what it is. Nick says that if he doesn’t come back, Victoria is going to fire Sally.

Adam stands up for Sally and offers to come back as her COO.

Nick says that won’t fly with their sister. His brother asks him to let him speak with Victoria before anyone else talks to Sally. Nick agrees and walks off.

Adam enters Sally’s office and she tells him his father asked her to convince him to return. He thinks this is all a game on his father’s behalf and he’s not playing it anymore.

Adam assures her she’s not leaving her position and he will take care of everything.

She wonders how. “You don’t want to know,” he says.

Victor heads to his daughter’s office and they talk about how good it is to see her back at work. She tells him she’s already starting to set everything right again. She’s determined to be rid of Sally but he thinks she should stay for awhile.

She’s not thrilled. He thinks Sally could lure Adam back.

Victoria thinks they should make a clean sweep. Ashland strolls in and declares that he has some things to say. Victoria starts breathing heavy.