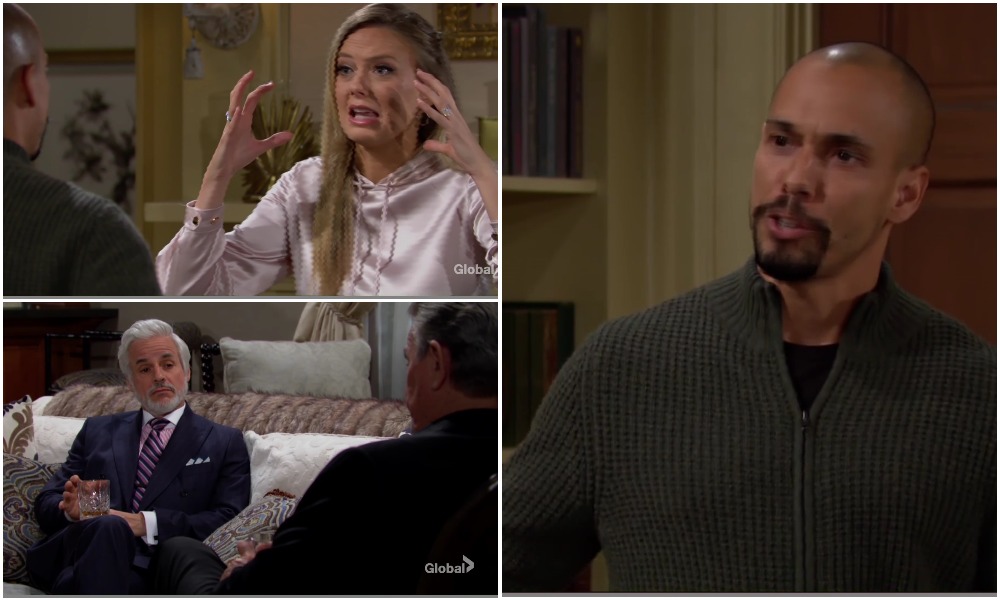 Canadian Y&R day ahead recap for Friday, January 14, 2021 episode, which airs in the USA Monday, January 17. (Recaps live by 5:45 PM EST daily.) In the previous episode, Sally asked Adam to New York with her. In this episode of CBS’ The Young and the Restless,Victoria gloats, Billy and Lily make love, and Abby melts down while Devon feels hurt over the custody case.

At work, Adam flashes to his talk with Victor about his taking a more active role at Newman Media. He leaves.

At the Chancellor home, Abby tells Devon she thought he was her friend. After all they’ve been through, how could he do something so hurtful? He’s not trying to hurt her. He knows Chance has been struggling.

Chance understands how he feels but doesn’t think there’s a need to take this to an extreme. Devon agrees but he wasn’t sure what else he was supposed to do.

He felt he had no choice but to pursue legal action to get shared custody. Abby wants time alone with Devon but Chance and Amanda prefer to stay. Abby worries about Amanda being his lawyer. She can either call her lawyer or her friend can explain his motivation — alone.

Chance and Amanda head outside after he asks her to talk privately so he can gauge where Devon’s head is at. Abby asks what changed Devon’s mind. He says the timing was off but he didn’t let it go. Abby thinks there’s more to this. He’s welcomed in the house at any time.

She asks if it’s about her parenting or her trip to Spain. He denies that. Her trip strengthened their bond but this is about him wanting a bigger role in his life and being concerned about Chance. “You agreed to be the donor,” she reminds him. “And now you’re turning on me?” He’s not.

Devon is still her best friend, but is worried about Chance’s mental state and how it’ll affect Dominic. This is what Chance told him and he thinks Dom needs a father figure in his life.

“You see yourself as Dominic’s father?” She can’t process that. He finds that hurtful, especially since she chose him to care for Dom when she went to Spain. Abby thinks Chance can be a good father while caring for himself.

They’re working on healing and have lost so much time. Devon’s not trying to take the boy away from her. She argues that suing them for shared custody will only make things worse for Chance’s mental health.

Richard Burgi let go due to COVID violation at Y&R

Adam finds Victoria and Ashland at Crimson Lights and congratulates them but says you don’t know it’s over until it’s over.” She gloats and they talk about Billy’s transparent plan.

Victoria thinks Adam should have been able to see through it. Adam asks why she thinks he didn’t and then wants to know why she didn’t give him a heads up. She claims she has no time to answer that.

Adam thinks there are two Newman sides. Newman Media and Newman Enterprises. She calls his company fledgling and that it was once Cyaxares, Ashland’s company. Ashland is quiet as they talk.

Adam wonders if she has something going on about Newman Media. She refuses to discuss it, so he assumes he’s on the right track. Ashland is pulled into the conversation and he praises Victoria’s brilliance and tells Adam he doesn’t call the shots.

Lily arrives home to find Billy as returned. The condo is filled with flowers and candles and champagne. She asks if she and his mother found peace and if he’s coming to work for Chancellor.

He’ll answer all of her questions but first wants a kiss. They make out and then have sex. This is what she needed. They drink champagne and banter. He reveals he told his mom about his plan and apologized.

Jill called Lily his guardian angel. Lily’s thrilled that he’s coming to Chancellor with his mother’s blessing. She shows him her phone where Adam texted her ‘best of luck’ on her new job. Billy sees that as a threat. She thinks it has to do with him seeing Adam before he left. Billy’s glad he upset him but thinks they should keep an eye on him. They go for another round of love making.

At the ranch, Michael explains he’s retiring to spend time with family, but he’s intrigued by doing private work with Victor as long as it’s not overwhelming.

Victor promises it won’t be. He talks about Victoria and Adam’s work and that recent events have had him considering taking a more active role at the company. He’s thinking of solidify the various factions calling themselves Newman. Michael likes a challenge but he wants less stress.

Victor knows and doesn’t intend to blow things up. He wants to protect his legacy. Michael could help him through the legalities. Victor admits he doesn’t trust Ashland Locke. This surprises Michael.

Victor has learned some unsavoury things about Locke. Not that it bothers him considering his own past. Michael can’t argue that. Victor would never trust that man running his company that he built from the ground up.

What kind of man would let his company merge with another unless he was standing at death’s door? What if the man recovers from his cancer? He could regret what he’s done. Michael thinks things could get tricky. The men drink to working together on this.

Back at Crimson Lights, Chance tells Amanda he understands where Devon’s coming from. She’s surprised. He knows he’s playing catch up with his son. He wonders if that’s what this is about. He mentions how he opened up to Devon and that it could have caused this and claims he’s trying to be the best father.

He confesses he thinks Devon should be involved. They agree that the more love for the child the better. Neither wants this to go to court, but both want him in the child’s life.

Nearby, Adam tells Victoria that he hoped that he had Ashland’s loyalty after helping him with his reputation. Ashland claims he would have handled it himself. Victoria thinks she’s making Adam nervous. She thinks her father may not always have his back.

Adam thinks she shouldn’t get too confident that he’ll always have her back. Or Ashland’s. He goes, leaving Victoria’s mouth open. Ashland talks about how ruthless her father can be. He wonders if something is going on. Victoria doubts it. Her father loves the game as much as her.

She thinks she’s planted doubt in her father’s mind about Adam’s work. This turns on Ashland. He thinks they can accomplish anything.

Amanda and Chance return after Abby calls herself heartbroken. Devon apologizes to them and thanks them for listening to him. Nobody replies and Devon takes off with Amanda while Abby lets her husband know they need to call Christine. Chance wants to wait on that, causing Abby to wonder whose side he’s on.

At home, Devon finishes telling Amanda about his chat with Abby. He doesn’t get why Abby sees him as a rival. Amanda says she didn’t get that vibe from Chance. Amanda says he needs to put Chance on trial. He doesn’t want things to get chaotic but he can’t back down.

Chance Confesses He Lied to Abby, Nikki Confronts Ashland For Making Decisions Behind Victoria’s Back & Phyllis Gets an Offer at Marchetti