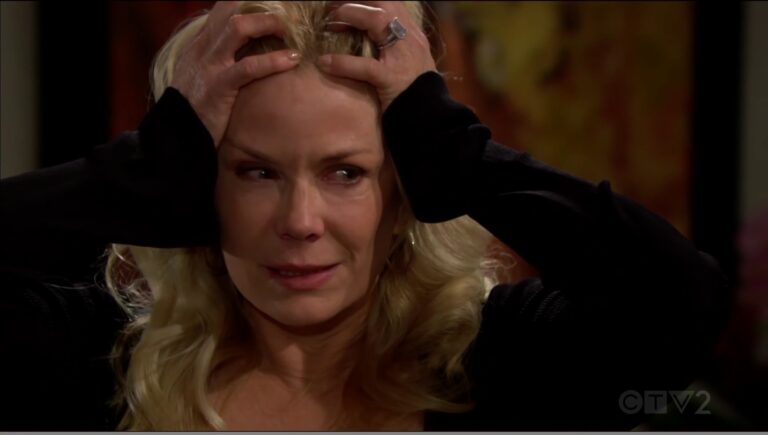 In the Monday, January 17, 2022, full episode recap of CBS’ Bold and the Beautiful, Ridge fends off questions from his kids, Hope and Liam wonder what’s happening with Deacon, and Brooke rejects Deacon’s pleas for a reunion. We also have Friday’s B&B recap where Deacon told Brooke he loved her and Steffy accused her of being petty.

At the cabin, Hope tells Liam how nice it is to get some work done while the kids are out. She prompts him to rub her feet. He notes that Deacon hasn’t been around since New Year’s.

She hopes he’s just busy with his new job. Liam concedes that her father has been on his best behavior since he got back, but worries that his absence may mean he’s gone back to his old ways.

Hope assumes that her mom telling Deacon she doesn’t want him around anymore is why he isn’t. Liam is surprised by her mom’s about-face.

Hope is just trying to support her mom while she works on her sobriety. She’s sure Deacon doesn’t know about her slip and just hopes that Steffy and Taylor don’t find out.

In the Forrester Creations office, Steffy and Thomas tell Ridge that they don’t want to watch him repeating history again. They can’t see why Brooke is letting Deacon back into her life.

What hold can he have on her? His kids don’t want to undermine things but they are worried. Ridge insists that everything is great. Nothing will change Brooke being his wife.

Ridge’s children remain unconvinced and want him to tell them what’s going wrong with Brooke. He’s adamant that Brooke is fine and they can handle everything in their relationship.

He has more respect for her strength and honesty than he ever has.

Ridge flips through photos of his son’s latest work and compliments him on them. Steffy goes on about all their wonderful family memories.

Their father decides everything is under control so he’s going home to check on Brooke.

When Hope drops by Forrester Creations, she and Steffy instantly start bickering about the situation with Brooke. Steffy accuses her of protecting her mother.

Hope says her mom doesn’t need protection. “People are starting to talk around her,” Steffy warns, pointing out that Brooke hasn’t been around for work and Hope has been defensive.

She hopes that whatever Brooke is dealing with doesn’t consume her life.

At Brooke’s house, Deacon repeats to her that he loves her. She doesn’t want to know how he feels; she just wants him to leave.

He thinks she’s afraid of what will happen if he stays. Brooke says she never would have kissed him if she’d been in her right mind. Deacon doesn’t know why she is trying so hard to deny the magic between them.

Brooke wishes she could understand how all this happened so it never would again. He reminds her that Hope is a product of their romance.

He’s loved her enough to stay away but doesn’t know how she can live through the merry-go-round with Taylor again. Maybe there was more than alcohol involved in their kiss? They could be amazing for their daughter.

Brooke orders him to stop this. If Ridge finds out what they did, he will leave her. “I will not allow that to happen!” she declares.

He tries comparing all the things he has in common with Ridge. She gets a text from Ridge that he is on his way home and orders Deacon out. He declares again that he loves her and nothing will change that. Before rushing out, he kisses her.

When Ridge arrives at home, he notices that Brooke is upset. Holding her, he assures her that she can tell him anything and it won’t change the way he loves her.

She worries about what people at work are saying about her absence. He points out that being Brooke means she doesn’t have to answer to anyone.

Brooke only wants to focus on him and what a great support he’s been. She’s let both of them down and never wants to do that again. They hug and she thinks about drinking and kissing Deacon.

Deacon goes to Il Giardino and flashes back over his life with Brooke, squints, and nods his head.