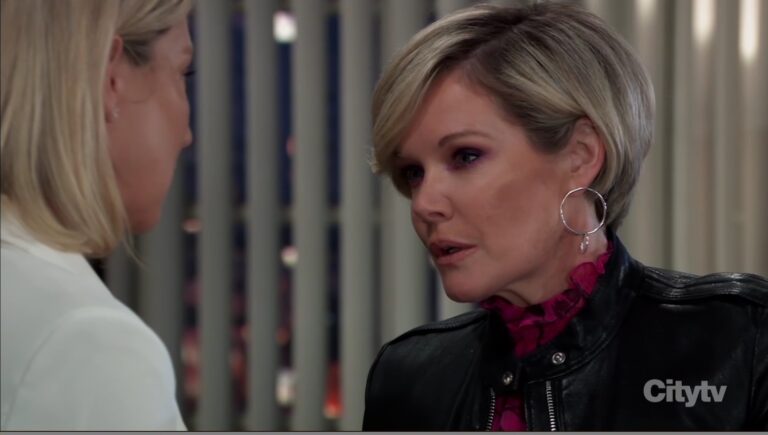 SoapsSpoilers’ General Hospital recap for the Friday, January 14, 2022 episode. Today, Laura attempts a family reconciliation, Nina gets legal advice, Michael can’t forgive his father, and Drew gives Carly his shoulder. We also have Thursday’s GH recap where Brad confessed that he poisoned Peter and Victor realized Maxie is the key to revenge on Brook Lynn.

Drew sits at the Metro Court looking at the portrait Scout made of him. Carly joins him and he reminds her she can talk to him. She gets a call from Michael and informs him that she’s moved into the hotel. After she gets off the line and sits down, Drew tries to give her some space.

She starts apologizing for how she treated him on New Year’s. He doesn’t want to take Jason’s place but is happy to offer her a shoulder. 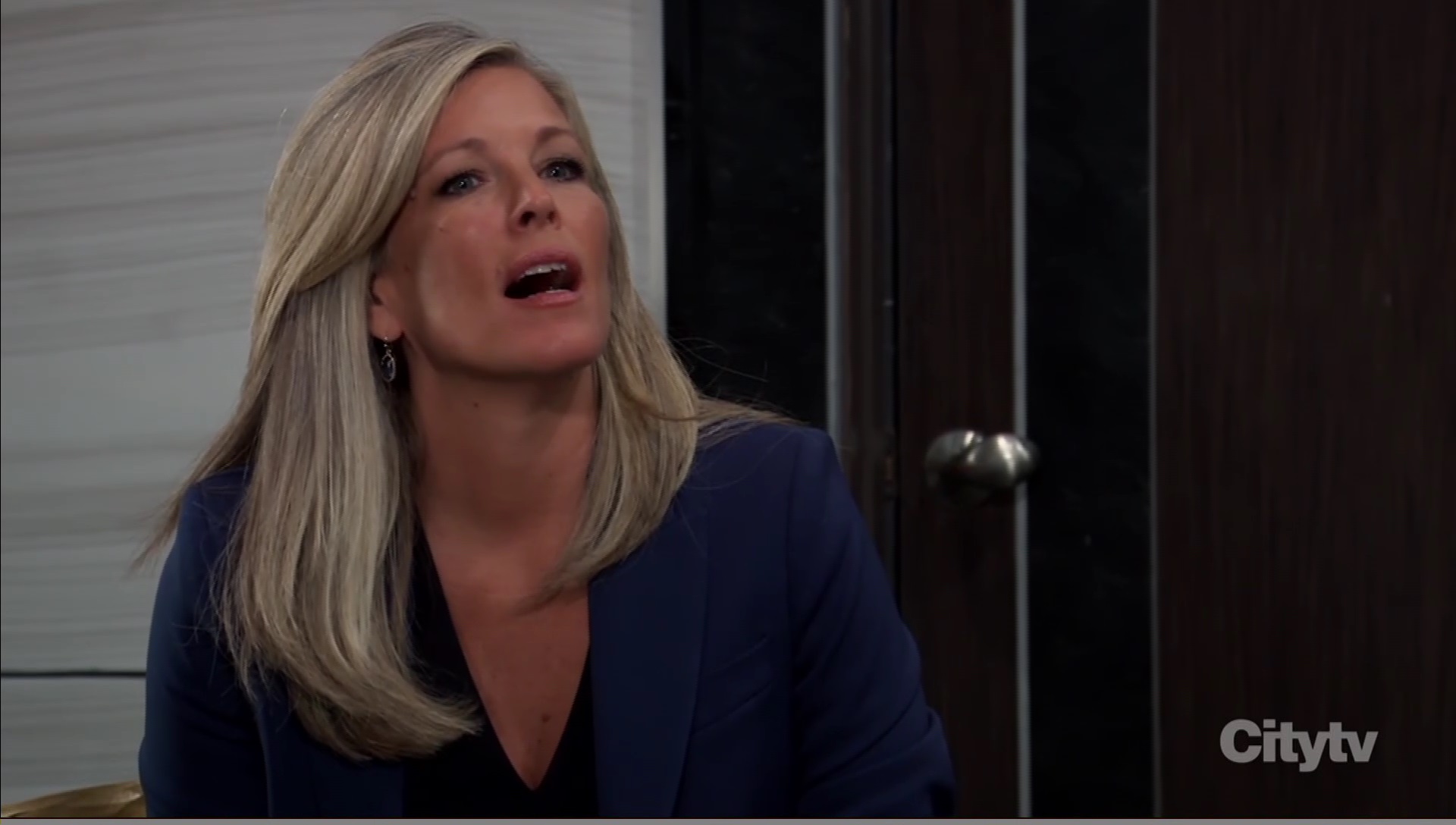 They chat about Scout and how much catching up he has to do. They’ve lost a lot of time and will never get it back. She tells him reunions are tough and teach you how much people have changed. As he swallows peanuts, she admits that she and Sonny are having problems. She’s moved out.

Drew urges her to trust her instincts. “Jason used to say that all the time,” she says. It’s great that she wants to look out for her kids, but that also means she needs to look after herself.

Carly apologizes to him for not being a better friend when he came back. He assures her she’s been a great friend. She’s glad she has another chance to get to know him. They laugh and smile. 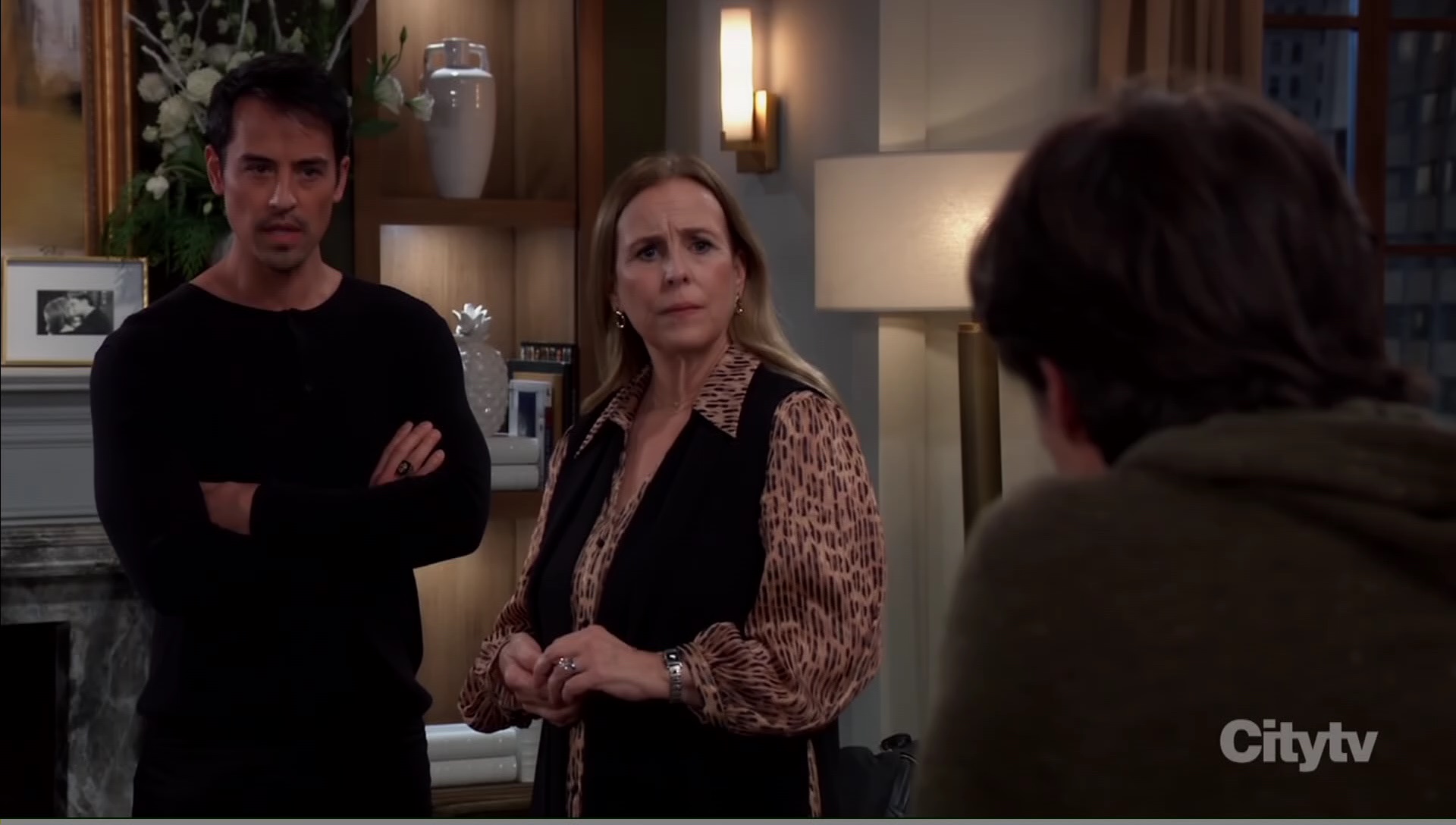 At their penthouse, Kevin and Laura call down Spencer for a family meeting. Nikolas arrives. The bickering begins about Ava as Spencer brings up how she is using his trust fund. Nikolas says all of this happened because his son refuses to accept Ava is part of the family.

Spencer says that he’s adjusted to making his own money and will save it to move out after he gets out of Spring Ridge. Laura is sure that he will survive the medium security facility, but it would be easier if he went knowing he had his whole family standing by him. She urges Nikolas to reconcile with his son. The prince wants that too. Father and son admit they miss one another.

Esme walks in and her boyfriend recaps the situation for her. She won’t let his family gang up on him and crosses her arms. Kevin decides to take her out for coffee. Reluctantly, she leaves Spencer’s side when he insists he should deal with this alone. Laura tries to referee between the father and son. Spencer didn’t feel the love all those years his father was faking his death. 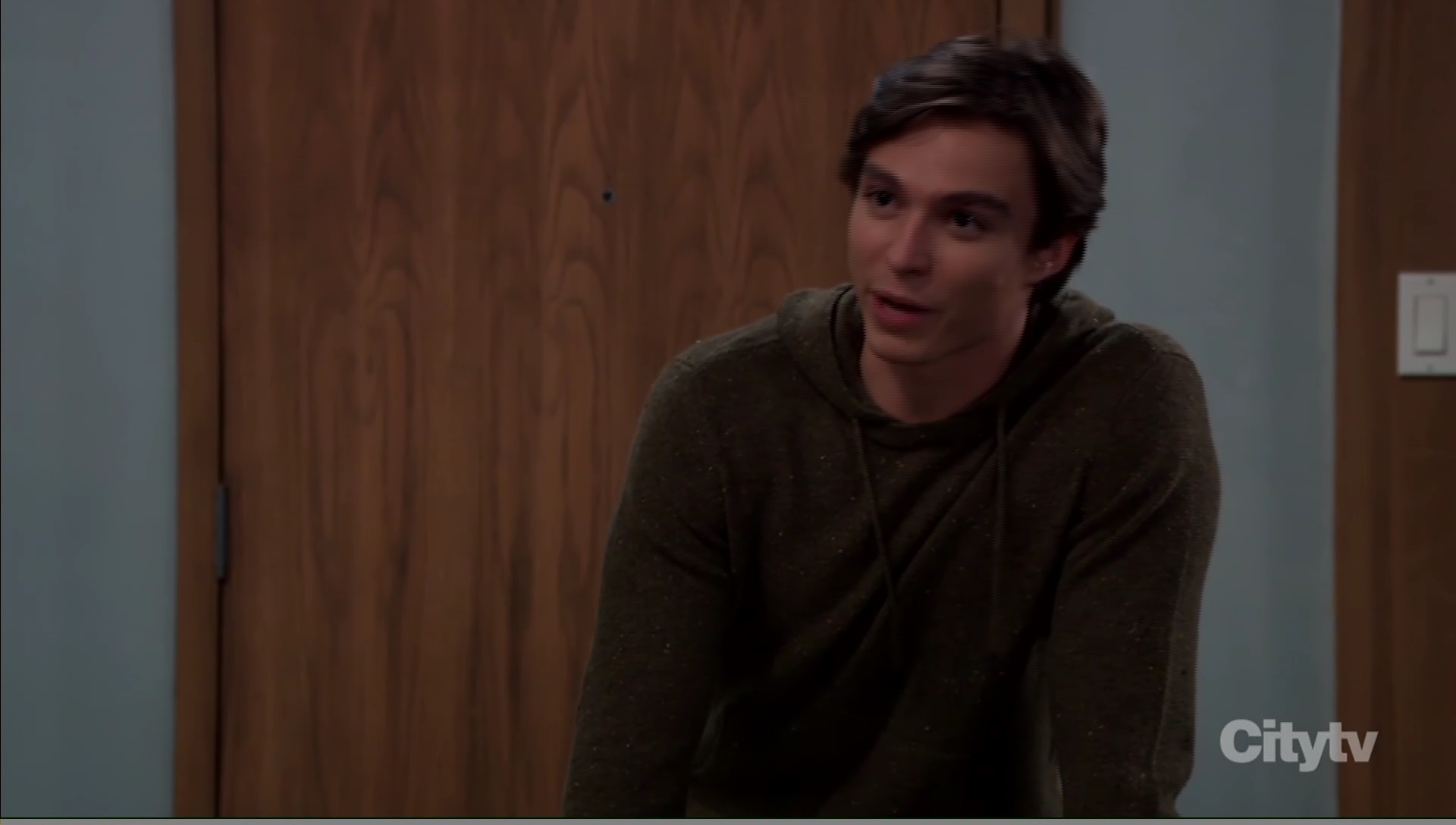 Nikolas insists he was better off not being part of his lies and he will always regret hurting him. Laura says that growing up means forgiving and it’s time to move forward. “You sound a lot like uncle Victor,” Spencer tells her after laughing.

She urges him not to fall prey to his great-uncle’s manipulations. He reminds her about forgiveness. She says Victor is not sorry for hurting anyone. Nikolas makes another pitch for forgiveness. That’s meaningless to Spencer if the family still includes Ava. Laura insists they are going to have this conversation again next week.

At Perks, Kevin asks Esme about her internship at Spring Ridge. She finds the criminal mind fascinating. After reading his books, she wonders how he can think being with family makes someone safer, especially considering who his brother is.

He doesn’t think that’s a fair comparison. The shrink asks about her siblings. She’s evasive and turns the subject back to Ryan. He warns her of how dangerous his brother is.

Kevin tells her that she doesn’t need to protect Spencer from his family. He insists that they are all on Spencer’s side. She has to use the ladies’ room and walks away. Once alone, he immediately calls Spring Ridge to restrict who has access to his brother. 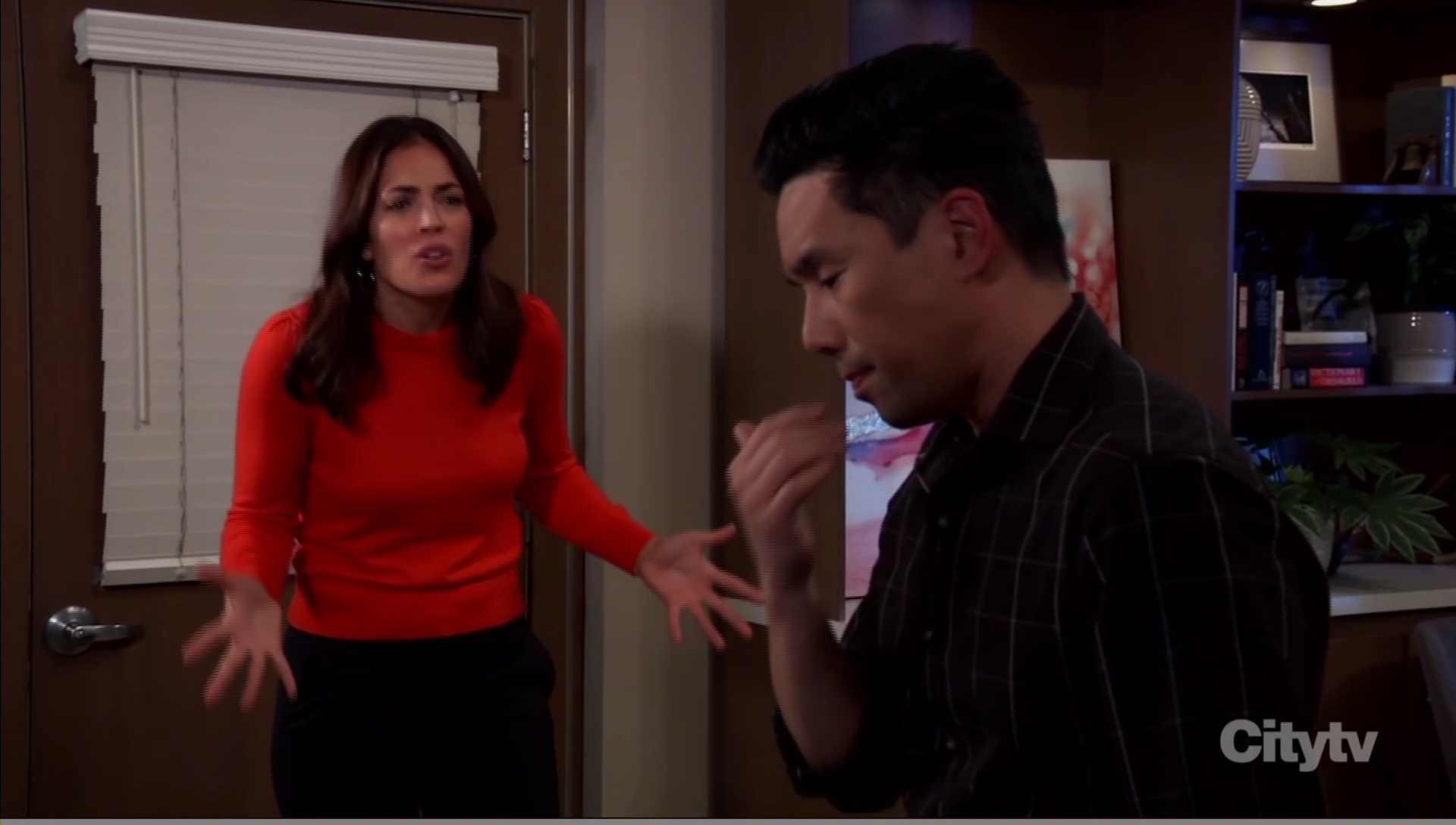 In her office at General Hospital, Brad confirms for Britt that he poisoned Peter. They’ve both done bad things but murder is a leap. He explains his aunt Selina got him the poison. Helping her was the only way to get out. If he defies his aunt, she will kill him. Dante shows up. He has information about Peter.

The cop wants to talk plans to transport Peter to Pentonville. They arrange to talk tomorrow. Dante pointedly asks Brad if he’s staying with Selina and urges him to watch his step. Britt brings up Michael threatening Brad and she declares he won’t be intimidated. S

arcastic Dante seems unimpressed and exits as Brad starts popping antacids. He tells Britt his aunt has been kind while she controls his existence. He’s afraid of offending her. People who do that disappear. Brad doesn’t see a way out of this. Britt promises to be there for him no matter what. She won’t let his aunt take her best friend away. The doctor has an idea of who can help him.

Ava arrives at the Crimson office where Martin is giving Nina legal advice. The Jerome is surprised that Scott isn’t her friend’s lawyer anymore. Nina reminds her of what he did at the hearing. Besides, this is about Wiley. Ava asks Nina if she’s sure she wants to start poking that hornet’s nest. Nina can’t see anything positive coming from Michael while Carly has his ear.

Nina tells them about how Carly, Willow, and Michael have treated her. Ava urges her not to give up her rights to see Wiley, but can she win? Martin says she can certainly win but it could mean burning her bridges. He offers to dig into case law while she considers her options.

Once the lawyer is gone, Nina tells Ava about the visits she had from Willow and Carly. She admits she told Carly that Sonny would have slept with her if she hadn’t turned him down. That makes Ava smile. She’s sure that Carly is worried. Nina thinks Sonny just wants his family back. Ava points out that doesn’t necessarily include Carly. She’s sure Carly is running scared because she’s realized Sonny still loves Nina. 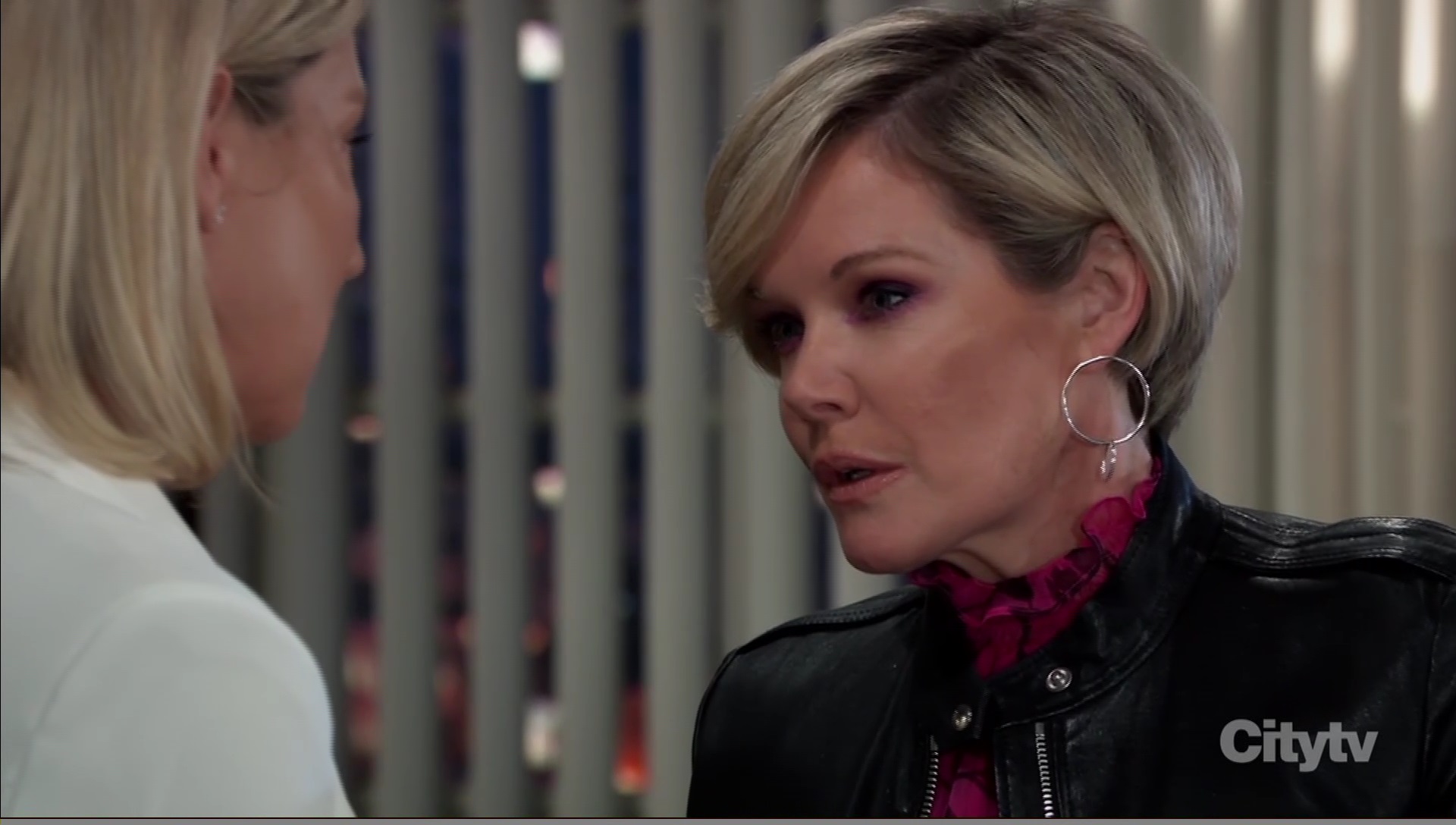 Nina wonders if there is a chance for her and Sonny if he splits with Carly. Ava tells her there’s no chance of that if she goes to war with Michael. She urges Nina just to play it cool because Sonny and Nina are sure to collapse. Then she can have Sonny and Wiley in her life.

Sonny pops up in the Quartermaine kitchen to see Michael. He still can’t believe what he heard from his father on the stand. Sonny never wanted Carly to find out that way. His son can’t forgive him for what he did to her. Sonny claims he understands. Getting heated, Michael declares that if he understood how he’s feeling, he would have never stood up for Nina at the hearing.

Sonny just wants to protect his family. Michael lectures him about failing in that department. As they shout at each other, Dante walks in and calms them. Michael tells his brother about Carly moving out and Sonny insists he will get her back. Michael asks Sonny to give Carly what she wants.

Sonny starts yelling that he can’t help when she won’t talk to him. “I don’t like waiting, but for your mother, I’ll wait,” Sonny says.