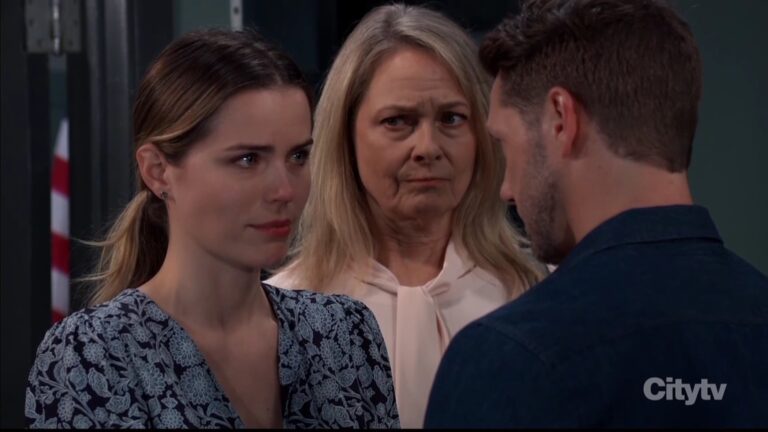 General Hospital recap for Friday, August 5, 2022. In today’s GH episode, Linc and Brook Lynn compete for Chase, Cody asks Britt for another date, and Gregory and Alexis settle their bet.

We also have Thursday’s GH recap where Sasha was arrested for trashing Smoltz’s car and Portia decided to risk everything for Trina.

Maxie and Brook Lynn join Lucy at the Deception office. They have to find out how to protect their friend Sasha and the company. She’s not sure they can do both.

They look at all the negative comments about Sasha on the internet and start drafting a press release. Lucy anxiously nibbles and Brook Lynn runs off to see legal and PR.

She tells Maxie that Martin sees the big picture and they have some tough decisions to make.

Sasha will always be their partner, but it may be time for her to step aside as their spokesmodel. If their stock value declines, they will have nothing. This is just business. “You can tell her,” Maxie says, walking out.

At the pool, Dante accuses Chase of lounging in a pool to avoid things. After they joke around, Dante admits he doesn’t have good news about his future on the force.

His guy on the inside said Chase’s chances of getting back in are slim. Dante tells him there is always hope. Hope won’t pay his bills.

“It’s a good thing he’s got other options,” Linc says as he steps in. After Dante reluctantly walks away, Linc tells Chase that he’s already booked him a gig.

Chase says Brook Lynn must have some irons in the fire too. Linc promises more. As he talks about marketing, Brook Lynn bursts in to say that he’s not just a piece of meat, he’s an artist.

Linc’s development team has already put together a plan for him and they will be able to sell loads of merchandise and record in the studio. Brook Lynn claims she can give him something more. The residuals for him will be larger in the long run.

When she steps away, Dante stops her and says that he can tell she’s running a con.

Meanwhile, Linc tells Chase that he knows Brook Lynn and what she’s really up to.

At the PCPD, Martin brings Sasha some coffee. She just stares into space.

Gladys joins Brando to wait. She’s sure Marin will be a great help. The lawyer comes out and tells them all the charges Sasha is facing, including attempted murder.

After Gladys leads Sasha out, Martin admits to Brando that they can’t beat the charges. After he calls the DA, he assures Brando how seriously he is taking this case.

Some of the charges can be thrown out but for the more serious ones, there is no way.

Brando says they will do anything he asks. Martin’s not sure that’s true for Sasha. She’s completely shut down and the evidence against her is damning. He encourages him to get her to commit to intensive therapy.

Brando isn’t sure she’s ready for that.

The lawyer explains that severely limits their options. The only other way to keep her out of prison may be guardianship.

Brando doesn’t know about that.

Martin assures him it is only a strategy to keep her out of prison and it won’t be forever. Given her state of mind, a trial won’t go well.

Meanwhile, Gladys tries to clean Sasha up. She’s dejected and says she would do what she did again. She’s tired of being exploited.

Gladys tells her that she loves her. She was reluctant to let her into the family, but can see how much she loves Brando now. She’ll do whatever it takes to help her.

When they join Martin and Brando, the lawyer tells them they have to take this one step at a time. Brando vows to his wife that everything will be okay.

Gregory joins Alexis on a patio to discuss his op-ed.

They go over comments and she admits a margin of readers agreed with his criticisms of The Invader.

This means he won their bet. He asks about Sasha attacking Smoltz and asks why it isn’t being covered. She’s not convinced about Smoltz’s ethics.

Gregory suggests she attend his new lecture course. Smoltz may not have a good character, but he was a target a violence and that makes this newsworthy.

She claims that if they just tell the facts, it would be a disservice to Sasha. He agrees with her about how important giving context is. She doesn’t know how to do that without violating Sasha’s privacy.

When Cody strolls onto the rooftop, Britt wants to leave. She flatly tells him she doesn’t like him.

He already got that impression and tells her she’s unforgiving of human frailty.

She’s appalled when he takes her drink. He tells her to see things from his point of view and accuses her of wanting him to fail. She admits he’s got her number.

When this slides into him getting sappy, she tells him she doesn’t like people much. He has a sappy present for her and hands it to her. She accuses him of being conniving. He admits people have been tipping him off about where she is.

She flips through the little passport he made for her and doesn’t hate it. Reluctantly, she agrees to another date.

Spinelli joins Maxie and they chat about her attempts to dig up some analogue records.

She notices how distracted he is by Britt and Cody and demands to know why.

He says that Cody is a scoundrel with many faces. She wants him to come to Europe with her but he claims he can’t leave the country because of work.

Sam wonders what he does now.

He tries to avoid explaining and tells her it’s a dead end before changing the topic to Dante. She tells him the cop asked her to move in. She worries about changing things.

Spinelli wonders if there is another reason she is hesitant.

Maxie joins them and watches Cody and Britt. She’s sure that they are right for each other. Both ladies think he’s a sweet guy. Spinelli tells them they couldn’t be more wrong.

When Maxie goes over to Britt, they step away and talk about the Sasha situation. Maxie asks her about getting cozy with Cody. Britt guesses she played a role in this second date.

Maxie jogs over to Cody and tells him his gift was a hit. She and Sam talk about how scattered Spinelli has been and wonder why he has such a problem with Cody.

Spinelli tracks Britt down at the pool and tells her that she can’t go out with Cody again.