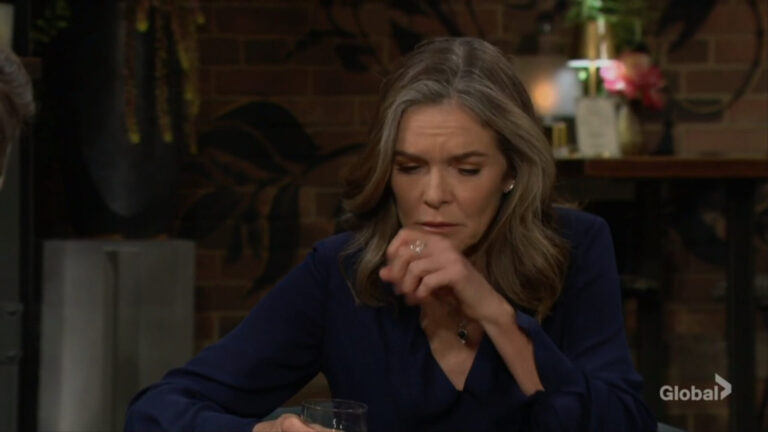 In this episode of CBS’ The Young and the Restless, Chance’s questions make Vicky and Nick nervous, and Victor explains away his feelings. In the previous episode, Chance pieces things together about Locke’s death, and Chelsea’s thrilled to work with Billy.

At the ranch, Nikki talks about Ashland being the children’s step-father. Victor doesn’t think they should be mourning for “that bastard.” Nikki thinks he’s pleased with how he’s triumphed over the man and asks why.

Victor’s just glad the man is gone. He deflects by reminding her that Locke tried to take everything from him and is where he belongs. “On a cold slab in a damned morgue, waiting for a pauper’s funeral.”

He talks about wanting unity for their family but Nikki sighs. That’s not going to happen.

She gently reminds him they’ve been down this road before. She’s sorry, but for his own sanity, he has to put that dream behind him.

At Newman Enterprises, Victoria worries Chance has overheard her discussion with Nick. He hasn’t but wants to talk to them again to get to the bottom of what really happened to Locke.

Vicky and Nick are both on edge as he tries to confirm their statements.

He walked from her door to the gas station. It was nowhere near the house.

It’d have been hard for the man to walk there with a head trauma. He asks if Victoria and Nick if there’s anything more they want to add to their statements.

They don’t, and he admits that they found video footage of the gas station and surrounding area appeared to show two people in the car, though the feed was grainy.

They retrieved a cigarette butt near the car, and noted a lot of footprints nearby. They shrug. They could belong to anyone.

He asks about the ring falling from Locke’s pocket and wonders how that happened. He knows they weren’t in the room when Locke left. Maybe someone moved the body?

Victoria agrees it could have happened but who would do that? Chance thinks Victor would, to protect them.

He says he’s on their side and urges them to talk to him. They glance at each other, making it obvious that they’re hiding something. Nick thinks he should be interrogating his father then, if he’s suspicious.

He lets them know he’s headed there next and gives them one last time to open up. Victoria is grateful the man is dead but it weighs on them how he died.

For the third time, an exasperated Chance asks if there’s anything more to add. Neither comes clean so he sighs and leaves. Victoria’s angry that Nick urged him to interrogate their dad. Nick barks and thinks Chance will never leave this alone.

Victoria doubts he’ll go after their family since he is family. Nick reminds her that Chance is 100% a good cop. He won’t turn a blind eye to  justice.

At the park, Jack and Traci watch Harrison playing soccer. They holler when he gets a goal and think that the boy will have a good future.

Traci likes the job Diane’s doing with Harrison as his grandma and questions how he feels about her.

At Society, Kyle and Summer wonder if Harrison understands that Father is dead. Talk turns to the headhunter who is looking for a new PR person.

She thinks they should hire her mother.

Kyle says, “It’s like handing Phyllis a grenade and pulling the pin.” Summer feels optimistic that it could force them to get along.

She explains she got an offer to sell the hotel and says she has exquisite taste and has proven herself by creating the escape club.

Kyle realizes that she is qualified. Summer knows she’ll bring a lot to the table and work her butt off. Kyle thinks they should spy on her and ensure she stays away from Diane.

They’ll tell Phyllis what they’re doing. In turn, Summer thinks that they should have something similar in place with Diane. Kyle’s in.

Diane shows up at Grand Phoenix. She was in the spa. She has to take care of herself for her grandson, especially since he’s grieving. Phyllis gets it.

“As parents, we need to be there for our children,” she says, reminding Diane that she faked her death.

Diane gets a text from Summer to meet about work. She taunts Phyllis who in turn says she has a feeling that something big is going to happen.

She says the world is her oyster. She gets a text from Summer who says she’ll be right over. Diane takes off and Summer appears and gives the job to Phyllis. It blows Red’s mind and she hugs her daughter.

She talks about competing with Diane at work until Summer stops her from gloating. She doesn’t want to create a volatile situation.

Phyllis was only joking. “Mom. Sometimes your jokes aren’t funny,” she says. Phyllis is surprised at that but agrees that she’ll keep away from Diane and conflict.

Summer explains they’ll be keeping a close watch on her. Neither of them trust she won’t stir the pot with Diane. Phyllis is happy to be working with her and thinks her worries are unfounded.

Summer denies that’s true. She let it run her relationship with Jack. Phyllis wants to move on and start a new chapter. Summer repeats that they’ll be watching her. Phyllis vows not to let her down.

Diane meets Kyle at Society. She takes a drink as Kyle lets her know Phyllis got a job at Marchetti and spits it out, coughing.

“You do realize, she’s just doing this to try to sabotage me,” Diane says, exploding. She’s grateful at least that they’ll be in separate divisions. Diane harrumphs and he tells them they have to be civil and if she can’t, there will be consequences.

Diane knows that Phyllis has an agenda. Kyle says if it’s true, she’ll only mess things up for Diane if she lets her.

“Oh so if she attacks me, do I at least have the permission to defend myself?” Kyle promises that things will be fine.

She’s strong and has faced much more. Diane appreciates it. It’ll prove to the doubters that she changed. She shakes her head, unconvinced.

Once she’s gone, Summer shows up to detail how the discussion went with Phyllis. He does the same and they relax a little. They kiss.

Nikki appears at the hotel and Phyllis tells her she got the job. While Nikki cheers, Phyllis says not to celebrate so fast.

The kids are planning on spying on her. Nikki asks if that means she has second thoughts. She’s not. Quite the opposite.

Nikki thinks Diane will be crazed to even hear that this is happening.

Diane runs into Jack at Crimson Lights. She rants about Phyllis getting the job at Marchetti and how she’s positive the woman will try to sabotage her.

Jack knows that look on her face. She’s feeling cornered and Jack can tell she’s wanting a preemptive strike.

He warns her not to go there.

At the ranch, Chance confronts Victor about being involved in Locke’s death more than he’s saying.

He asks his father-in-law, “If you have something to say, now is the time to come clean.”