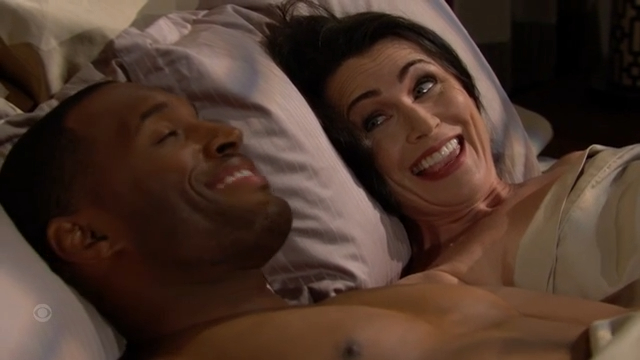 In the Friday, August 5, 2022, full episode recap of CBS’ Bold and the Beautiful, Finn is moved as he returns home, Quinn and Carter relax in bed, and Taylor avoids talking about her feelings for Ridge.

We also have Thursday’s B&B recap where Taylor asked Ridge why he kissed her and Brooke panicked about him seeing the photo of her and Deacon.

Finn and Steffy are jetting back to the States with Taylor. They laugh about how cute it is to see Ridge sleeping underneath all the children.

Finn is going to get checked out when he gets home but feels good.

Taylor says this is such a milestone for their family. As she thinks about kissing Ridge, Steffy notices she has something on her mind.

She doesn’t get an explanation. Taylor gets back to talking about what a miracle all this is. Finn takes off to wake up the kids and Ridge.

Steffy asks her mom again what’s on her mind. Taylor claims she’s only thinking about the family being whole again. It’s the best feeling in the world.

At Brooke’s, she is eager to see Ridge and sure he’s overjoyed to be reunited with his daughter. She’s kind of creeped out by Sheila being on the loose but won’t worry about it.

Hope asks if Ridge said anything about the selfie. Her mom says he’s been pre-occupied.

Deacon wanders in. He heard Ridge was on a plan so he wanted to visit his favorite ladies. Being around them makes him feel like he’s grounded in something good.

Brooke feels like she’s doing something behind Ridge’s back. They talk about the photo being taken down. Deacon guesses it was taken down to protect “his royal Ridgeness.”

Brooke is just trying to respect her husband’s feelings.

Hope and Deacon go to Forrester Creations. She knows he cares about her mom and is stinging from rejection. He just wants her to be happy.

Deacon doesn’t think she will ever find true happiness with Ridge. She thinks Ridge would never be good enough for Brooke in his eyes.

He suspects that Ridge has residual feelings for Taylor. Why else has he not fully committed to her mom?

Ridge returns to his home. She’s thrilled until she spots Taylor with him. They tell her how incredible Monaco was. Brooke can only imagine how they must be feeling as parents.

They chat about how Finn is doing. It was great to see Steffy smile again. Brooke is glad they are all back. Taylor watches Brooke cuddle him and he looks over at her.

Finn, Steffy and the kids return to their home. He’s overcome at the sight of it. This is something he’s been imagining so much but it seemed so far away.

His wife tells him he’s back where he belongs. Kelly drew a picture of the whole family.

“You’re manifesting already,” he says. “Man-o-what?” she asks. Everyone hugs.

Steffy tells him how sad the house was without him. She’s glad they’ve had their miracle.

Thinking about them together is all he’s been thinking about. They tell each other how in love they are. Kelly calls and he goes running then brings the kids back out.

Quinn and Carter lounge in their bed and he tells her she can have anything she wants. Quinn wants to make them playing hooky from work spending a whole day in bed a monthly tradition.

He tells her how amazing she looks in his bed. She thinks he looks pretty amazing himself. He’d tried to give up on her but here she is.

She’s so proud she can love him out loud. Carter hasn’t wanted anyone they way he wanted her. They kiss and he sighs.

She’s dismayed when he starts talking about Ridge. That’s a buzzkill and she’d rather make out.

When they take a break, they talk about how long they had to hide their feelings. She doesn’t know what he was thinking marrying Paris. She’s just glad she got to save him from himself.